Siblings of autistic children get chance to express concerns 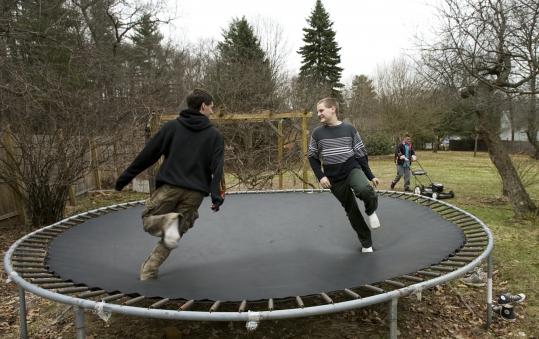 WEST BOYLSTON - A snowball fight erupting inside a conference room: Not the sort of thing you see every day.

It was all Sue Loring's fault. A few minutes earlier, Loring, the director of the Autism Resource Center in this central Massachusetts town, had distributed pieces of white paper and instructed a dozen youngsters to write down "a worry you have about when you grow up." Then she told them to crumple the paper into "snowballs." And then she urged them to cut loose, extending a license for mayhem to a roomful of kids who ranged in age from 9 to 15. They didn't need to be asked twice.

Once the flurry had subsided, Loring asked the youngsters to pick up one snowball apiece at random from the floor or table and read it aloud. In their piping voices could be heard this truth: To be the brother or sister of an autistic child is to live in a bewildering present and face an uncertain future, to battle an undertow of anxieties that most youngsters don't have to think about, and to balance an array of conflicting - and often confusing - feelings.

"I worry about where my brother will live when he grows up."

"When Joey gets older, he is going to need some help."

"He will punch me like he does now, and he will be bigger, and it will hurt."

"I'm worried if he will have a good job and can drive."

"Robby will get teased at what he does because he's autistic."

It was to help siblings cope with these kinds of concerns that the Autism Resource Center launched the monthly sessions known as "Sibshops." Blending information and education with recreational activities, the Sibshops are designed to make the siblings of autistic children feel less alone and less burdened by responsibilities no one their age should feel compelled to shoulder.

Autism is a developmental disorder that affects communication and social interaction skills, and is often characterized by intensely repetitive behavior. It ranges from high-functioning Asperger's syndrome to severe learning disabilities and mental retardation. However it manifests itself, for siblings it often adds a layer of pressure to be the "superkid." For these brothers and sisters, the Sibshops are a sounding board that allows them to vent their complicated feelings.

"It really does help me," said Todd Hamelin, a 15-year-old high school freshman from Fitchburg. "I can be myself. They all know what I'm going through."

Hamelin often nodded or exclaimed in agreement as the youngsters took turns reading the contents of each scribbled message on a recent Saturday. Both of his brothers are autistic, but on that morning he seemed most concerned about his younger brother, who has Asperger's.

"I think he's likely to be successful, but he's addicted to video games," Todd told his fellow Sibshop participants. "I'm worried about his financial issues." He also expressed concern about the social environment his brother will encounter when he enters high school. "I'm worried that he's going to be teased."

Reassuring words came from Loring, who has a 23-year-old son with autism, and from her daughter, Blithen Davis. First, on the issue of teasing, Davis told Todd: "As long as he has a handful of friends, it doesn't matter." Loring then promised that, if necessary, she could conduct an awareness-raising workshop in the high school when the time came. As for the question of money management, the adults told Todd (and the other children, who were listening closely) that professionals will shoulder that task when the time comes.

Jayne Paszko, who formerly worked at the center and who has a 36-year-old brother with autism, sought to calm the fears of the girl who, thinking of her own autistic brother, had written: "I worry that he won't be happy." Paszko promised her that he would be, "as long as [he] has a purpose and is in a comfortable situation: having a job, something to do, just the basics in life, the things that we all want." Loring added pointedly: "And having a sister who cares probably helps."

A little help, a big difference
The Autism Resource Center is a program run by the HMEA, Inc., a nonprofit human-services agency for individuals with developmental disabilities based in Franklin. The services the center provides to autistic children and their families include weeklong "Family Fun Days" in the summer that feature swimming, singalongs, fishing, canoeing, cookouts, crafts and games. Four years ago, the center launched the Sibshops.

On a recent Saturday, the adults included Loring, Davis, Paszko, and Cindy Olmsted, the director of family supports at HMEA, who has a 40-year-old brother with autism.

They tried to put the youngsters' minds at rest about the blizzard of issues that surfaced in the snowballs. They assured them that service providers will be there to help their autistic brothers or sisters with housing, employment, and health-care needs when they are adults. They emphasized that employers and the general public are more understanding nowadays about autism. They stressed that a job and a handful of friends could make all the difference.

The overall message: Though their autistic brothers and sisters will always need their love and support, the full responsibility for their care will not fall on the siblings.

"When I was younger and thought about having to take care of my brother, it was overwhelming," Davis said. "But when you're an adult, it's not going to be a big, big deal."

Some youngsters looked relieved; others appeared unconvinced. One boy voiced qualms about his autistic brother's future. "When I tell him to turn out the light, he tells me not to boss him. I worry that when he gets a job, he won't. . ." His voice trailed off. Loring finished his unspoken thought: "You're worried he doesn't have the social skills to hold a job." The boy nodded.

That was Olmsted's cue to begin talking about her autistic brother, Johnny, who works for the Marriott hotel chain. She acknowledged it has been a challenge for him at times, saying he was once suspended for three days for cursing at his boss. But she noted that he has a job coach who helps him, and that he generally fares well because "there are people around him that understand him and support him."

Some youngsters needed less to ask questions than just to give voice to the things they usually keep inside. "I need to talk about my emotions, what I feel about Dante," said Marta Brodeur, 10, speaking of her 6-year-old brother. "Sometimes I can feel embarrassed, I can feel happy with him, I can feel angry at him, and sometimes I can feel proud of him."

A chance to chill
For Todd Hamelin, that range of contradictory emotions is familiar. His parents, Mike and Kathy Hamelin, have ruefully dubbed him "Just-a-minute-Todd" because they often have to give priority to his two brothers. Todd's 17-year-old brother, Kevin, has autism with mild mental retardation, and his 13-year-old brother, Ryan, has Asperger's syndrome. He spoke of them with affection and pride. He saluted Kevin's creativity in repairing lawn mowers, and when Ryan showed up during the interview, the two took turns teasing each other. "Ryan is kind of like me," Todd said. "He's hyper and funny."

"Me and Todd used to fight a lot," chimed in Ryan. "But now that we're older, I don't know if it's the Sibshops, but we don't." Mike and Kathy Hamelin said that though Todd was always mature, he has developed an extra layer of resiliency thanks to the Sibshops.

But they're not a cure-all. The parents have yet to meet most of Todd's friends, and Todd acknowledged the reason for that: He is reluctant to invite anyone to his home because of his brothers. Moreover, he is often anxious when the family is out in public. "They act pretty normal till they have a fit," he said. "And then a crowd gathers. But we just keep going."

"When I really get mad at them, I just want to be alone, want to be an only child, just have average siblings," he added. "I want to be a teenager and just chill. But I can't really do that, because of the family."

Few if any of the kids at the Sibshops have the option to "just chill," given the complexity of their family lives. That is why, month in, month out, they turn to the Sibshops, as both an anchor and a release valve.

On their way into the conference room on this Saturday morning, the students walked past the "feeling wall," on which, graffiti-like, were written the words "Embarrassed," "Jealous," "Proud," "Happy," "Sad," "Scared," "Worried," "Guilty," "Thankful." Marta Brodeur paused and studied the words.

"Do you have an emotion that you want to write about?" Loring asked her gently.

The child searched for the word "Happy" on the wall, and wrote her answer beneath it: "I am happy that I am here."