Four on the floor 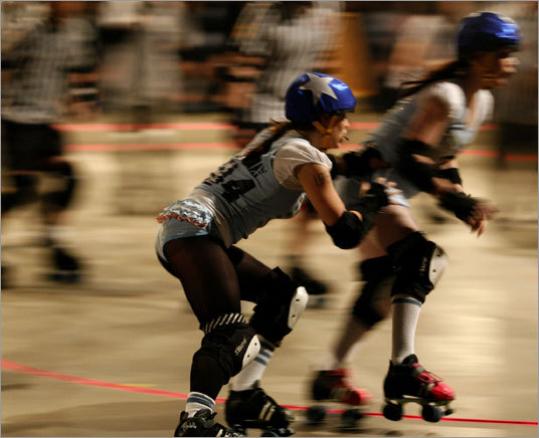 Every superhero has an alter ego. Clark Kent has Superman. Peter Parker has Spider-Man. Bruce Wayne has Batman. But there are a few new heroes in town, some double-namers that you may not have heard of yet: Boston's all-star roller derby girls.

With names like Evilicious, Jennasaurus Wrecks, and EZ Bake Shovin', these women lead their lives under their legal names and play their sport under their roller derby names.

' 'We'd like to think that we're superwomen," says Evilicious, also known as Eva McClosky. "But we're women and really strong women and feminists. The self-esteem that you get from being a skater in a league and being a part of this business and this family is amazing."

The 20 or so skaters who make up the roster of the Boston Massacre, the all-star team from the Boston Derby Dames league, are culled from the league's three teams: the Nutcrackers, the Cosmonaughties, and the Wicked Pissahs. This isn't your grandpa's flat-track roller derby of the 1920s. The Dames are all-female, and the league, organized and run by the players, has a DIY punk-rock feel.

The Dames' bouts, held in a dusty Shriners hall in Wilmington, run an hour each, with an unlimited number of "jams" - a two-minute period in which a sprint-skater (the "jammer") from each five-person team tries to weave through and pass a crowd of skaters from both teams, while her teammates try to block the opposing team's jammer from doing the same. The more times the jammer makes it through the pack, the more points awarded. The bouts look like a vicious combination of playground games: Red Rover meets tag meets a three-legged relay race, all on quad-wheel skates and with a healthy dose of hip-checks and ripped fishnets.

Derby, however, is not child's play. To these players, derby is life.

Sarah Doom is something of a revolutionary. She began in roller derby about four years ago in Tucson. When she was accepted to Harvard for graduate school after graduating Brown University, she wasn't ready to give up derby, so she helped start Providence Roller Derby in Rhode Island. Once the Boston Derby Dames were up and running, she became one of the original skaters for this league as well.

One of the most experienced skaters, she's more invested in the athletic aspect of the sport than the showmanship. "If you're not in it to be an athlete, then it stops being fun, and it's just work," she says.

That's not to say that showmanship and alter egos don't appeal to her. In fact, she considers her derby name precious: "It was actually given to me when I left Tucson. [My teammates] made me a T-shirt that said 'Sarah Doom, PhD, 4.0.' So I think the intent is that when I graduate I will be Dr. Doom."

NAME: Sugar Hits
A.K.A.: Caitlin D. | JERSEY NUMBER: 1001
AGE: 27
DAY JOB: Middle school teacher
Sugar Hits is a rarity in the derby world: Though roller derby is a passion that takes up a lot of her time, she isn't quick to tell the world about her skating life. Her colleagues and friends at the school where she teaches know about her hobby and have been to some of her bouts, but she keeps it a secret from her students. (She asked that her last name not be published.)

"I'm sure they would all think it was really cool if they knew, but I keep it separate," she says. "It really is just such separate worlds for me. At school, I'm Miss D, and at practice, I'm Sugar Hits, and somewhere in between, I'm Caitlin."

Baby Fighterfly grew up in the roller rinks of San Diego and cut her derby teeth playing in the Providence Roller Derby league. She skated with the league for two seasons, then moved to Boston two years ago. Because she works at home, she has the flexibility to expand her commitment to the league. "If derby could pay my bills, I would go with derby and ditch the job," she says.

She had a rough start in the league. Three weeks before her first bout, she strained her anterior cruciate ligament, which is generally a six-week injury. In tough-chick fashion, she stayed off it for two weeks, then put her skates back on, and won her first bout."

Some bouts you fall harder than others, but no matter what, you never regret it the next day," she says. "I could probably be in a body cast, and I'd be like, 'That was a great bout!'"

Etta Mames "After the singer Etta James, not after the soy bean edamame" loves that roller derby gives her excuses: excuses to wear fringe, excuses to knock people over ("I'm a blocker; I just love hitting people."), and excuses to look cool by brushing off nasty-looking injuries.

"People at work were really concerned about [my cuts], and I have sprained both of my knees, so I was on crutches for a while last fall. And everyone's like, 'Is that that rollerblading that you do?' And I'm like, 'Kind of.' It could've been a lot worse, but people do tend to wonder what's going on with me."

She started playing almost two years ago, when she found herself out of college and bored in front of the television all day. "I was at a party, and I was like, 'I need to do something!' " A friend of a friend who competed in roller derby introduced her to the sport. "It just clicked into place, and now everything else that I fit into my life has to fit around roller derby."