A light went off 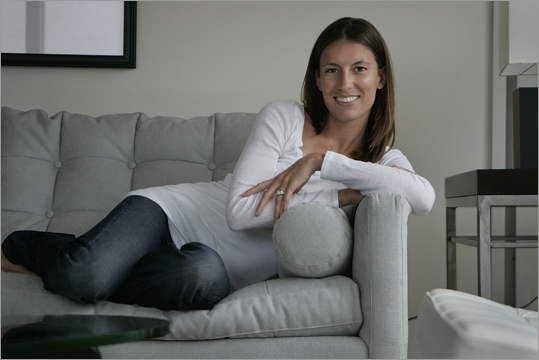 Kelli Pedroia says that even after being diagnosed with melanoma at 18, she went tanning before her wedding to Dustin Pedroia. (Suzanne Kreiter/Globe Staff)
Email|Print|Single Page| Text size – + By Bella English Globe Staff / April 29, 2008

Winters are long in the Chicago area, where Kelli Hatley Pedroia grew up, so she'd frequent the local tanning parlor. She was 14 when she started, not legally old enough, so her older sister signed for her.

"We just felt pasty and gross from the winters," she says.

Summers were spent at the backyard pool. On spring break, the family always went somewhere hot. "My mother and I would just fry ourselves with tanning oil and no sunscreen," says Pedroia, who's married to Dustin, the Red Sox second baseman and last season's American League Rookie of the Year.

A photo of her on the night of her senior prom shows her tanned in a strapless white dress, flanked by her equally tanned parents. A year later, at age 18, she was diagnosed with stage two melanoma, which is the leading cause of cancer deaths in women ages 25 to 30.

Pedroia, 24, recently joined the Melanoma Foundation of New England as a volunteer spokeswoman. She says she is Exhibit A when warning teens about the dangers of tanning, especially in this season of parties and proms.

She noticed a red, asymmetrical mole on her right thigh after returning from a spring break trip to the Cayman Islands. The doctor removed it, and when the lab results came back, they were as shocked as she. Her doctor told her he'd never seen anyone so young with stage two melanoma.

Pedroia was sent to an oncologist for scans and to a surgeon who took a "large egg-size chunk" of lymph nodes out of her leg, leaving her with a three-inch scar.

But just days after her surgery, she was back in the sun.

"This is so embarrassing, but I was still in my leg cast and I was at the pool. I thought I was invincible," she says. Two years later she had another atypical mole removed from her clavicle, and last summer, one from her breast.

On a recent day, she unpacked boxes upon her return to Boston from Arizona, where she and her husband spend the off-season. Their apartment is just a block or so from Fenway Park, and bay windows offer a panoramic view of it.

At the apartment, Pedroia drew the names of winners of a no-tanning pledge contest held by the foundation. At several high schools throughout New England, students signed the pledge not to go to a tanning salon before the prom. "I realize that by getting a tan I am sharply increasing my chances of developing melanoma, which can be fatal if not caught in time," the pledge reads. (The grand prize winner of $5,000 toward the school prom was the Connecticut International Baccalaureate Academy in East Hartford, where 77 percent of juniors and seniors signed the pledge. Pedroia also drew the names of runners-up from the other New England states, which won $1,000 for their proms.)

According to the Melanoma Foundation, people who use tanning beds once a month before the age of 35 increase their melanoma risk by 75 percent. Using a tanning bed for 20 minutes is equal to spending one to three hours a day at the beach with no sun protection. Tanning beds emit three to six times the amount of radiation given off by the sun.

Pedroia, who married her college sweetheart from Arizona State University on Nov. 11, 2006, hit the tanning booth before her wedding, despite having already been treated for melanoma. She says she didn't get serious about her cancer until last year, when the couple was asked to participate in Major League Baseball's melanoma awareness campaign, "Play Smart When It Comes to the Sun."

Last May she finally stopped going to tanning parlors. "Dustin said you need to stand behind your word," she says of her participation in the MLB campaign.

Red Sox spring training in Florida this year was a radical change for her. "I was the one hiding in the shade. I went to the pool once, with sunscreen." Instead, she sat inside the condo and watched all six seasons of "Sex and the City."

At Fenway, her seats are in the shade. But her husband stands at second base for hours, often in the heat of the day. Does he wear sunscreen? "Dustin? I don't even know. That sun beats down, and I can say it to him until I'm blue in the face, but if the kid doesn't get it. . ."

But she didn't get it, even after she was diagnosed.

"Now, I get it," she says. "I'm passionate about it. I don't want any other girl to go through what I went through. Being tan is not that cool. You don't realize the damage you do."

As for his own protection, Dustin Pedroia says sunscreen is available in the clubhouse before each Red Sox game and that he tries to remember to apply it. "I try to put it on for every day game and especially during the hot, humid days of spring training," he says in an e-mail.

After her sessions at a tanning parlor, Pedroia says that she'd sometimes have burns on her back shaped like the fluorescent bulbs. "But for me, it was a high, like an addiction. I'd go once or twice a week if an event was coming up."

State law bans children 14 and younger from tanning salons unless accompanied by a parent. Deb Girard, executive director of the Melanoma Foundation of New England, says her group has pushed for legislation that would ban children younger than 16 from tanning salons. The new law would also require written parental permission for 16- and 17-year-olds. But for two sessions the bill has been tabled on Beacon Hill.

"I don't think I've ever been healthier. I've been so concerned with what I've done to my body that now it's all about eating healthy, working out, loading up on sunscreen, and finding an umbrella or shade."

As for her husband, he says her bout with melanoma has scared him.

"I am very protective of her and want her to stay away from the sun," he says in an e-mail. "I know it's very hard for her to stay away from the sun, but she is being smart by protecting her body and getting the word out to others of the dangers." His mother had a melanoma removed from her back two years ago and is now also cautious about the sun.

If you see the Red Sox wives on TV this season, Kelli Pedroia will be easy to spot: She'll be the one in oversize sunglasses and a big hat, with tons of sunscreen, sitting in the shade.