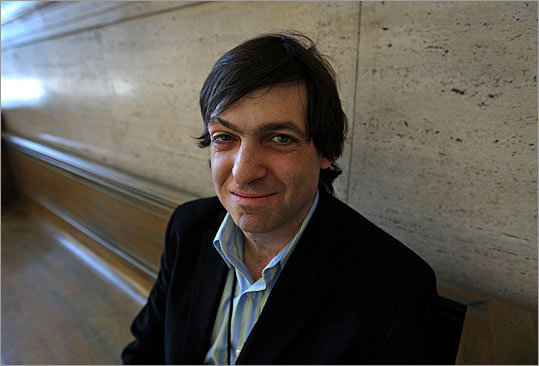 CAMBRIDGE - We love to be told we're smarter than we thought we were, but a surprise bestseller by an MIT professor has a less happy message: We're consistently irrational much of the time. While there's no cure, there's hope - if we can learn to outsmart ourselves.

The writer is Dan Ariely, a behavioral economist at MIT and author of the new book "Predictably Irrational: The Hidden Forces That Shape Our Decisions." It jumped onto The bestseller list at No. 5, where it remains this week. In worrisome times, we're eager to understand what makes our economic selves tick.

"I don't think people are stupid - just human," Ariely, 40, said in an interview under the Massachusetts Avenue dome at MIT. Wearing his rainbow-colored socks and with his iPhone beeping in a little red bag around his neck, the professor was full of high-energy talk. "I love talking about my research. At dinner parties, nobody can stop me."

Ariely's book explores the varieties of nonsensical economic thinking, such as:

We value things more when we pay a higher price for them. The Bayer aspirin and the Rolex watch seem valuable because of how much they cost, not because they're better in practical terms than a generic aspirin or a Timex.

Relativity distorts reality. We might be earning 10 times more money than we earned for the same work a decade ago, but we're convinced that we're underpaid if the people around us are earning more.

We're hopeless suckers for the word "free" on an item for sale, even if there's a hidden cost and the product is something we don't need or even like.

"Predictably Irrational" is full of experiments with real people, many of them students in and around Cambridge, testing decisions about beer, sex, spending, procrastination, honesty, and desire. "Doing social science is fun," Ariely said. "That the world around us is our chemistry set, that everything is potentially the object of an experiment, is fascinating."

Born in New York, Dan Ariely grew up in Israel. As an 18-year-old military trainee, he suffered third-degree burns over 70 percent of his body when a magnesium battlefield flare unexpectedly exploded in front of him. He recovered from the injuries and went to college at Tel Aviv University, then to the University of North Carolina to study psychology. In the United States, Nobel laureate Daniel Kahneman, a cofounder of behavioral economics now at Princeton University, urged him to go to business school. According to Ariely, Kahneman told him that psychology departments weren't interested in behavioral studies. So he finished his psychology PhD, then got another in business at Duke University. He holds a joint appointment at MIT's Sloan School and the Media Lab, and also teaches (and mainly lives) in Durham, N.C.

Speaking by telephone, Kahneman tried to put behavioral economics in a nutshell: "Standard economics is mostly a mathematical discipline. It makes assumptions, and one routinely made is that economic agents are rational. Behavioral economics is simply economics without the rationality assumption. Economists find it very difficult to give up the assumption, but some do, and often find they can get to a richer and more realistic model of how people behave." Ariely, he added, "is one of the most innovative people in his generation. His experiments are very compelling."

In one experiment, Ariely posed as a waiter in a pub, to test peer pressure in beer-ordering within groups. In another, to test the power of "free," he and two colleagues set up a table in an MIT cafeteria. They offered normally high-priced Lindt chocolate truffles for 15 cents and ordinary Hershey kisses for a penny. Customers had to pick one or the other, not both. Seventy-three percent of the customers saw a good deal and went for the truffles. But when the prices were cut to 14 cents for the truffles and free for the kisses, 69 percent of customers went for the kisses, even though the truffles were an even better deal.

Ariely's own experiences pepper his book. During the agonizing three-year hospital treatment for his burns, nurses had to change his bandages daily. They would yank them off abruptly, which was painful, because they believed that was easier on the patient than doing it slowly. Later, at Tel Aviv University, he conducted a study, and found that taking the bandages off slowly was less painful for burn sufferers. He informed the hospital and it changed its procedure.

He tells of considering a sporty Audi vs. a Honda minivan. He chose the Audi because it came with three years of "free" oil changes. Later he computed the value of the oil changes: $150, or about 0.5 percent of the purchase price. Because he and his wife have two children, the minivan made much more sense, but "free" was irresistible.

Then there's the strange tendency to get trapped by a choice between near equals, in ways that work against our real interests. A few years ago, Ariely had an offer to leave MIT and go to Stanford University. He could not see a clear advantage of one college over the other. "It was incredibly hard to decide," he said. "I traveled back and forth. I tortured myself and my wife. I chose to stay at MIT, and I'm not sure it was the right decision, but I wasted so much time that my life would have been better if after two weeks I had flipped a coin. We need to take time into account when we make decisions."

Ariely believes that stubborn social and economic problems might be solved if we would use experimental testing in place of wired-in tendencies, even though he suspects that "doing experiments is not natural for us." Take health-care costs, for example.

"The real cost of health care is the cost of late diagnosis, the cost of emergency rooms," he said. "Imagine I am your doctor and I am scheduling you for a colonoscopy for May 15. What is the chance that you will wake up on May 15 and say, 'This is a good day for a colonoscopy'? But what if I created a health insurance policy such that if you didn't show up on time, I would charge you $500 extra, or if I charge you $500 at the time of the appointment, but give you back the money only if you show up on time? If we did that, we might be able to create a policy where people actually [have preventive screenings] more often."

How has all this affected Ariely's own decision-making? He says he tries to be alert to early-warning signs of irrational behaviors and have a plan to avert them. Examples: "Did you ever say things to your wife in the heat of anger that you regretted? Did you learn after doing it never to do it again? It's very hard. But you can say, 'When I get angry, I'm going to go away for an hour.' I have learned to avoid things that are 'free.' I have learned the importance of taking decisions out of my hands, like the decision to save. I don't want to have to think every month about how much money to put toward my retirement."

As Ariely speaks, new experiments and optimistic ideas tumble out of him, like water from a fountain. "It's amazing, the little secrets of life that make us a little better," he said. "Like dieting, for example. If only we got rid of elevators. . . ."