Holiday gift-giving is about creature comforts 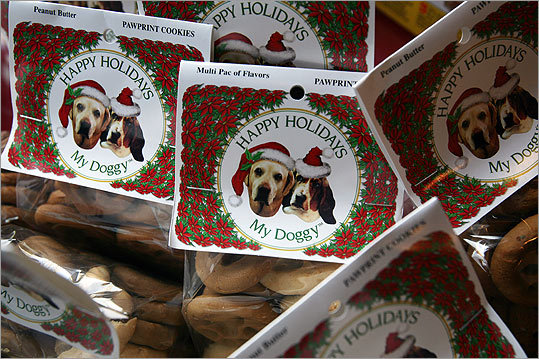 When your high-end sales job hinges on pleasing an upscale clientele, the toadying holiday present poses a particular challenge: How do you make your sycophantic gift stand out from the other sycophantic gifts cluttering the doorsteps of the wealthy this time of year?

You go through the dog.

"I feel so smart," Suzy Frank, a vice president of sales at Marquis Jet, said as she assembled a $50 basket of treats and toys at Brookline's Cause to Paws pet boutique on a recent Saturday. "I wish I had more clients with dogs. This is going to make me a star."

The National Retail Federation predicts that holiday sales will rise a disappointing 4 percent this year over last year, but Rover and Kitty have no need for concern. Annual spending on pets is expected to hit $40.8 billion in 2007, a nearly 6 percent rise over last year, according to the American Pet Products Manufacturers Association.

No one's teased out holiday numbers, but association president Bob Vetere says: "Anecdotally we are seeing more people buying for other people's pets." Thanks to the empty-nesters on one end, and young professionals too busy to marry and have children on the other, pets have become the stand-in for kids and spouses. Which means friends, family, and business associates must remember them at the holidays. Or else.

"Sometimes the boss's favorite person is the dog," said Robert Van Sickle, an owner of Polka Dog Bakery in the South End.

With the holiday clock ticking on a recent weekend, shoppers were looking to cross pets off their lists. At Polka Dog, Scott Levine, a Web designer, needed something for his girlfriend's boxer who, by the way, is easier to shop for than the significant other "You can get the dog anything and he's psyched about it," he said. The owner? "Not so much."

A few doggie treats away, Leeann Murphy was looking for something for her sister's beagle and mutt. "She doesn't have any kids," she said. And at Cause to Paws, Martin Goldstein and his wife were searching for Hanukkah presents for his sister's Pomeranians. Asked what the dogs like to do, Mishel Goldstein replied: "Bark." "We should get a muzzle," Martin joked.

Like the childless uncle wandering the toy store in a daze, many pet-free shoppers have no idea what to buy, or even what kind of dog they're buying for.

"They come in and say, 'It's a fluffy white thing,' " Van Sickle said. "Or they say, 'The dog is her life."' Sometimes he suggests a safe gift like a chew toy, and, of course, a gift certificate is always nice. That way a dog can go into the store and choose from merchandise displayed at snout level. Van Sickle mentioned that last year a dog was registered at the store (for poop bags, chew toys, and collars). Even the man who sells $4.95 dog cookies and $55 quilted dog vests for a living seems a bit stunned by the enthusiasm. "Make something up and I've heard it," Van Sickle said of tales of excess.

Sometimes the challenge isn't choosing what to buy, but getting it past one's own pets. Amanda Sullivan, a graduate student at Cambridge College and the owner of three dachshunds, knows this all too well.

"They don't get the concept that Mom is wrapping this gift for another dog and it's going in a box to go outside to the post office," she said. This year she'll spend $150 on presents for her dogs to give other dogs, $200 to $300 on gifts for her own pooches, and $80 on human presents. "Some of my friends think I'm crazy," she said.

Or worse. When people hear about $495 Ralph Lauren alligator collars, $255 Burberry doggie sweaters, and $90 pet baseball hats, they shake their heads and ask, almost to a person, "What is this world coming to?" But Harvard College professor Marc Hauser, author of "Wild Minds: What Animals Really Think," says that's a difficult line of reasoning.

"Once you start going down that road questioning people's use of finances, it's very easy to show that everyone's being immoral," Hauser said. "Just think of all the omissions of altruism that we're committing right now. Why aren't you trekking around Darfur helping people survive? Are you going to tell a person who never had children that they shouldn't be giving presents to their animals?"

For those bothered by blinging up a boxer, a charitable donation in the pet's name, of course, may be the way to go. Biodegradable poop bags also make a thoughtful gift. The important thing, in many cases, is to just give something. Why? Because the pet gift "solidifies" the human relationship, said Colin Allen, a philosopher and cognitive scientist at Indiana University's Center for the Integrative Study of Animal Behavior. Besides, the pet gift is an easy way to buy for the friend who has everything though that concept may have a short shelf life. With stores like Ikea and J. Crew adding pet merchandise, gift givers may soon face a new dilemma: What to buy the pet who has everything?