Getting the bats out of the belfry

'Wildlife removal expert' Gary Paduch is on the case 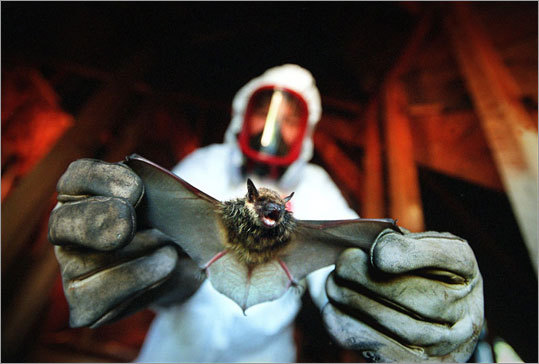 You awaken in the middle of the night with a tingling feeling in your spine. Something, or someone, is in your room. Goosebumps start to form, the size of silver dollars. An intruder swoops down on you. It's too late to defend yourself. All you can do is dive under your covers and curse your fate.

Bats. It's August, and they are making their annual nocturnal appearances in bedrooms, living rooms, dens, kitchens, and psyches. Uninvited - and certainly unwelcome - these furry, fanged, winged critters have been putting the fear of God, and rabies, into suburban and city folk alike.

Your bat troubles are Gary Paduch's livelihood. Paduch, a "wildlife removal expert" based in Middleborough, is so busy with bats these days that he's turning down skunk, raccoon, snake, woodchuck, squirrel, and other "nuisance wildlife" jobs.

On a recent cloudy morning, Paduch, 36, is on bat patrol in an aluminum-sided Cape-style home on a quiet, leafy street in West Bridgewater. The night before, within a 15-minute time frame, the occupants counted 50 bats - 50! - flying out for their nightly feast of mosquitoes. To say that the humans in the house were not happy is an understatement.

"We've used pots and pans and sheets and everything else we can get our hands on," says Crystal Correia, 23, who shares the house with her friend Kathy Simmons, 26, and their children.

"Last night," adds Simmons, "there was a big brown bat in the kitchen, flying around. It must have been this big." She holds her hands a foot apart and shudders.

Outside - out of earshot - Gary Paduch says he believes the house is infested with at least 100 bats. How does he know? "Droppings," he says. In fact, he has caught one of the beasts for this (squeamish) reporter to see. But when he goes to fetch it, it's flown the coop, through a tiny breathing hole he'd made in the plastic bag.

Paduch sighs. "That's the problem with bats. They are flat animals. If you can slide a matchbox under the bottom of a door, a bat can get through there."

Paduch takes his bats very seriously. For five years, he has had his own business, Gary's Wildlife Services. His cards state "Professional Removal of Nuisance Wildlife" and bear the pictures of a skunk, raccoon, squirrel, and fox on them. For two years before setting up his own shop, he worked for someone else, trapping and removing unwanted animals for hysterical homeowners.

How does one get into this line of work? Paduch grew up in Carver, trapping animals with his dad (and then letting them go). Later, he caught tons of muskrats for the cranberry growers. "I was always just interested in animals," he says, despite the fact that he has been dive bombed by bats, sprayed by skunks, and stymied by snakes.

To pursue these pests, Paduch is equipped with a special problem animal control license, issued by the state Division of Fisheries and Wildlife. He had to take a trapper education course and pass a "problem animal exam" that included questions such as "When you remove a problem animal, can you let him go at the nearest state park?" (no) and "What disease is most associated with bats?" (a nervous breakdown? No, rabies).

Paduch, whose Dodge Ram license plate bears the inscription "Skunk 1," is a member of the Massachusetts Association of Problem Animal Controllers, as well as the national association. Every winter, the national group holds a convention in the wilds of Las Vegas, where they discuss such pressing issues as the latest in "exclusion techniques," wildlife and diseases, and wildlife laws.

August is prime time for bats. For one thing, it's the nursery season: Bat mommies are teaching their babies how to fly. Sometimes, those kiddos make mistakes and end up in your bedroom instead of your yard. And in sultry August, bats residing in your attic will often fly down to the cooler climes of your living quarters. "They don't like to get too hot," says Jim Cardoza, a wildlife biologist with the Division of Fisheries and Wildlife. "If they get dehydrated, they may blunder into your living quarters."

This particular August has been crawling with bats, judging by Gary Paduch's calls. "Maybe because July was so cold and rainy, the bats are out more now," he muses. And nothing - not skunks, not raccoons, not squirrels, not even snakes - gets to a homeowner like bats, he says.

"There's something about bats that freaks people out. Maybe it's the bad press from the movies, with bats swooping down," says Paduch, who has gotten bat calls so panicky as to be nearly unintelligible.

These days, Paduch is doing only bat jobs. The other animals will have to wait their turn. "I can't get to the skunks until October," he says. "We're working six days a week, 13 hours a day, and we can't keep up with the bats. They're my priority because they're actually in people's living quarters, whereas the other animals are under decks or in sheds."

It's noon, and this bat man and his young sidekick - in this case, Rob(ert), not Robin - are up on the roof at the West Bridgewater house, installing one-way tunnels, so the bats can leave but can't re-enter. Then they seal up holes and cap a chimney. One side of the red-tile roof is covered with bat guano, which is toxic.

None of this fazes Paduch in the least. "I don't mind doing it," he says. "I don't hate bats. They're useful. They eat mosquitoes."

Paduch's services don't come cheap, but people are willing to pay, and he guarantees his work for three years. He's booked well into September. A bat inspection costs $55; "exclusion services" can cost anywhere from $650 to $4,000, depending on the size of the house. Once, Paduch and another company de-batted an oceanfront mansion on Cape Cod. The procedure cost the owner $6,000. Paduch did a job in Berkley that, he estimates, involved 2,000 bats.

By early afternoon, Paduch and assistant Robert Rose, 25, who describes his work as "fun," have finished up at the West Bridgewater house. As Kathy Simmons leaves for work, she tells them, "I will sleep better tonight, for sure."

Before heading out to the next bat job, Paduch checks the messages that are flashing on his beeper: "Woman needs skunk removed in crawlspace." "Call Patricia re: a bat." "Problem with voles. Do you do this work?" "Genevieve re: a bat." "Mice in attic." "Jean re: bat in attic." "Check out a bat problem." "Mark re: snakes. Please call!" "Problem with bats." "Check out a bat problem." And it's only 1 p.m.

In Rockland, Shirley Thompson is waiting for Paduch and Rose. For the past few nights, she and her daughters have sat up in chairs until the wee hours, their house lit up like a Christmas tree, using open umbrellas as shields and brooms as weapons. "I have not slept in days!" she greets Paduch. "I'm just petrified of bats!"

Paduch does an inspection and tries to reassure her. "It's not a big problem, only a starting colony of 10 bats or so." Thompson, 65, looks ill at the news. Paduch and Rose go into battle, and a couple of hours later have installed their bat tunnel and sealed up holes. "You sure they won't come back?" Thompson asks anxiously. Paduch hands her a card and a bill, then has to leave. There is much more work to be done. Right now, there is a bat driving a family batty in Medfield.

For information on bats and their habits, call the state Division of Fisheries and Wildlife at 508-792-7270.