Compared with US, hiring in Mass. has been decent, but brace for a letup 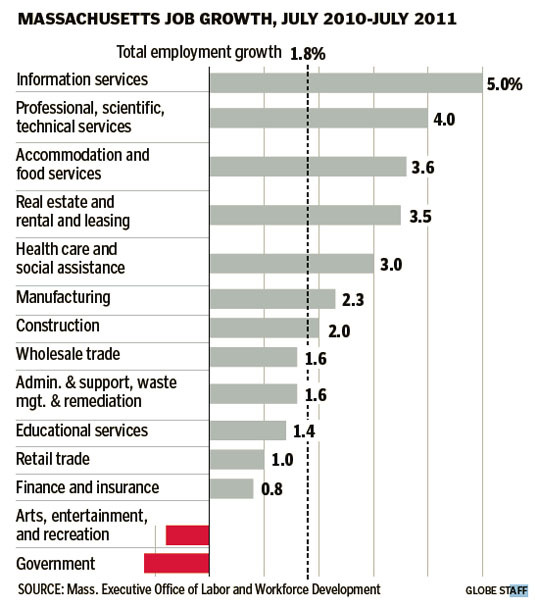 The Massachusetts economy has outperformed the US economy this year, adding jobs at more than double the pace of the nation as a whole. That’s the good news.

But local job hunters should prepare for longer searches and cautious hiring as a number of national and international events - from political stalemate in Washington to national debt crises in Europe - contribute to a global economic slowdown and raise the threat of double-dip recession.

“The downside risks certainly outweigh the upside,’’ said Alan Clayton-Matthews, a Northeastern University economics professor. “If the US economy is weak and Europe is weak, Massachusetts can’t continue to grow much faster.’’

Boosted by its technology sector, the Massachusetts economy has expanded at a much faster rate than the US economy, quadrupling the nation’s pace of growth in the second quarter, according to the University of Massachusetts. Job growth has been stronger here, too.

In the first seven months of the year, the state’s employers have added more than 50,000 jobs, an increase of nearly 2 percent, according to the US Labor Department. Nationally, employment grew less than 1 percent during the same period.

The state’s unemployment rate was 7.6 percent in July, compared with 9.1 percent nationally.

Massachusetts has a high concentration of companies that sell technology equipment, components, and services, which have benefited from strong global demand for these products and services. As a result, tech sectors have driven job growth in the state.

Employment in information services, which includes software, Internet services, telecommunications, and data processing firms, grew 5 percent over the past year, according to the state Executive Office of Labor and Workforce Development. Jobs in the state’s professional, scientific, and technical services sector - which includes a variety of technology, research, and consulting firms - grew 4 percent during the same period.

Manufacturing employment, led by makers of tech equipment, grew by more than 2 percent.

Andre Mayer, senior vice president of research at Associated Industries of Massachusetts, a trade group, said Massachusetts has weathered the difficult economic times better because its key industries depend more on business spending and less on consumers than those of other states.

“We don’t do a lot of home building, we don’t build cars, we didn’t get hit by the worst of it,’’ he said. “But there are some concerns going forward.’’

Economists have downgraded forecasts for the second half of the year after a tumultuous August that brought a downgrade in US credit, concerns about US and European budget deficits, and further worries about politicians’ inability to resolve those deficits. Eric S. Rosengren, president of the Federal Reserve Bank of Boston, said he expects growth to be so weak through the rest of the year that the national unemployment rate could rise; he revised a projected 3.5 percent growth rate for the rest of the year down to 2 percent last month.

Since many Massachusetts businesses sell in national and international markets, a slowdown in the US and global economies could hurt the state, said Mayer. There are also unanswered questions about the impact of federal budget cuts on the state’s health care and defense industries, and how global economic turmoil might affect foreign-owned employers in Massachusetts, such as Swiss pharmaceutical giant AG.

Clayton-Matthews said he does not think the nation or state will veer into a double-dip recession, but that job seekers should be prepared for “very slow growth’’ in hiring. He recently lowered his six-month economic forecast for Massachusetts, projecting a 3.2 percent growth rate, down from 4.3 percent.

Massachusetts lost more than 4 percent of its jobs in the last recession and has so far recovered about one-third of them. The state is not expected to regain all the jobs it lost in the recession until 2014 at the earliest, according to forecasts. Meanwhile, there are still about 260,000 unemployed state residents.

“Things are certainly less hopeful than they were a few months back,’’ Mayer said. “There isn’t a lot of momentum here and conditions are not likely to be significantly better in six months than they are now.’’

More in the Big Help
Your comment is subject to the rules of our Posting Policy
This comment may appear on your public profile. Public Profile FAQ