THIS STORY HAS BEEN FORMATTED FOR EASY PRINTING
DIVERSITY BOSTON

Why is Red Sox Nation so white? 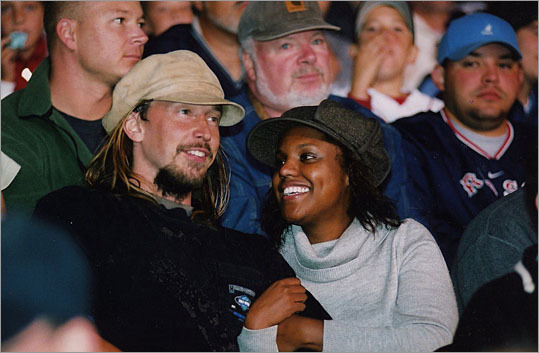 If my interracial marriage of nine years were a screenplay, it would open on a scene like the one that recently unfolded in our living room, as my husband and I vegged out watching the in high-def.

“Look!’’ I said in the third inning, jumping from the couch. “There’s a black person in the seats at Fenway!’’

Then my husband blurted out absolutely deadpan and without missing a beat: “That’s computer-generated. Like the ads behind home plate.’’ And so began another night of banter across America’s race divide, white husband to black wife.

Life in small-town New England can make a mixed-race couple cynical. But at the heart of my amazement was something deeper, and that is the long and curious history of blackness and baseball in Beantown. After years of watching the Sox from section 30, there’s something I’ve never quite been able to figure out: If only two miles separate Yawkey Way from Malcolm X Boulevard, why is a packed Fenway crowd a virtual sea of white? And if my Sox allegiance transcends color, why do I sometimes acutely feel like that lonely brown speck in the stands?

I fell in love twice when I moved here in the ’90s — with baseball and with my husband, in that order. For a girl who didn’t know what a closer was until she was 26, that’s saying something. A co-worker took me to my first game in 1997, and the minute he started talking, I was a goner. Suddenly there was chin music, rubber matches, and pitchers painting the black. I dare anyone who loves language not to love this game.

On September 20, 2000, I officially entered Sox fandom. It was Game 2 of a double-header. It was the day Omar Vizquel robbed Rheal Cormier blind, stealing home as the lefty reliever stood there and did nothing. Absorbing the shock of the play from the stands, I joined the faithful: I was physically sick, and also completely rapt.

Unfortunately, disgust is something I’ve felt at Fenway in other contexts. I’ve seethed as a nearby fan screamed “Go back to Japan!’’ at former third-base coach Wendell Kim. (Kim, a Korean-American, was born in Hawaii.) Once, my husband nearly got us kicked out after confronting fans shouting antigay slurs at former Blue Jays outfielder Frank Catalanotto. I wonder, if I ever heard the N-word fly, what would I do? And is it possible some blacks don’t come because they don’t want to risk hearing that ugliness?

To its credit, Red Sox ownership has openly acknowledged the story of race on Yawkey Way. The Sox, who passed on Jackie Robinson and Willie Mays, were the last big-league team to integrate in 1959.

Since 2002, they’ve flung open Fenway’s doors to community groups, boosted minority staff hires, shelled out scholarship money, and launched programs to send a loud message of inclusion. Loud, but not totally consistent: Last year, my heart cracked when NESN, which is majority-owned by Sox brass, agreed to simulcast WEEI radio hosts John Dennis and Gerry Callahan — the duo that infamously coined the term “METCO gorilla,’’ comparing an escaped ape from the city zoo to black children commuting to suburban schools. That was eight years ago — but about three months ago, the two could be heard expounding on why black people pronounce the word “ask’’ like “akx.’’

According to Sox chief operating officer Sam Kennedy, several people reported it to the team, which in turn expressed its displeasure with the station. “I didn’t hear it,’’ Kennedy stressed, “but it sounds despicable. We don’t control the content or talent of the radio station, but it’s extremely disappointing when things like this happen, and it gives us pause.’’ If it gave the Sox pause, imagine what it did to some of the very groups the team wants to attract.

For fans, baseball is religion. For owners, it’s a business. I get that. But like believers before me, I long for the day my hometown team will go all the way against improbable odds. I root for them to reverse their other curse.