There are lessons to be learned on the job -- even when the job itself leaves you feeling grubby. 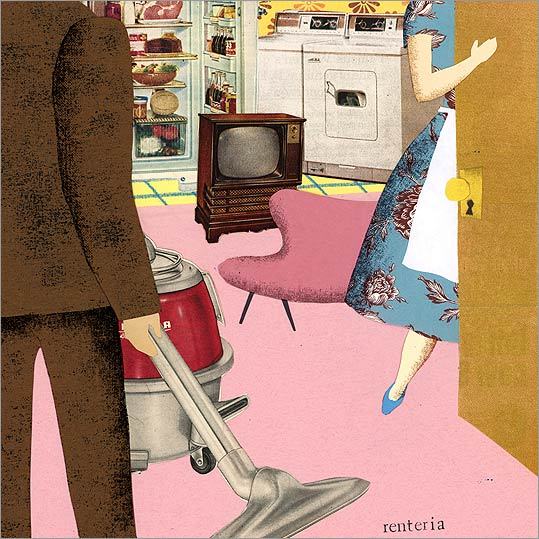 In 1977, the summer after my sophomore year of college, I went to Boston to look for a job. Bad plan. Then, as today, there was a recession, and even Friendly’s – where a manager tossed my application on a stack as high as a Fribble – wasn’t hiring. I walked around until my heel fell off. I remember sitting with my broken shoe in the lobby of the John Hancock tower, then known for shedding its windows onto the streets. Stopping at a famous failure felt appropriate. Back again on Long Island, things weren’t much better. In desperation, I took a job as a door-to-door salesman of vacuum cleaners.

Each morning at Electrolux began with a short film and a pep talk. After this, the old salesmen would testify: “Remember that street? Everyone was out of bags!” Or: “I showed her the vacuum, and she and her friend both bought one!” Like ballplayers, they remembered every hit and how the weather was that day. I’m sure they knocked on doors in their sleep.

“Keep knocking, and you’ll make sales,” they told us. “There’s an ace in every deck. Just keep turning over those cards.”

I was paired with a young go-getter anxious to get started, tailgating, swearing, revving the engine of his muscle car. A month before, I’d been studying Wordsworth – Where is it now, the glory and the dream? – and now I was stuck in rush-hour traffic as Ted Nugent screamed from the eight track: Dog, dog, dog eat dog.

And there before us lay the tedium of the day. Knocking on doors, waiting to be pleasant, convincing. Each closed door was a refusal. Some afternoons we’d end up sitting in the shade, unable to turn over one more card.

But when I did get inside, there was a show to put on. I was in the center ring with two vacuums – the new Golden Jubilee edition Electrolux and Mrs. Gullible’s old machine. My job was to shame her. I was there to convince her that she lived in a dirty hovel. I was there to lead her back to cleanliness, which, it went without saying, was next to godliness. This show was called “Digging Dirt.” It was central to the Electrolux faith.

“Did you vacuum today, Mrs. Gullible?”

“Then this rug must be clean, right?”

I’d vacuum with the Jubilee, and then open the machine and shake out the dirt. Mrs. Gullible would be mortified. “Maybe you missed a spot,” I’d say. “Let’s try that again.” More dirt. I would dig and then dump dirt all over, changing attachments, sweeping the curtains. Pretty soon her home would look awful. And if she still resisted buying, there was one more trick.

“Mrs. Gullible,” this salesman would say, “you may not mind sitting in dirt, but you can’t tell me that you want to sleep in dirt!” Then I would go to the bedroom and vacuum the mattress. I’d call for a glass of water and empty the bag. Floating dead skin. Sometimes that would be set on fire. The sale was made.

Of course, digging dirt was a con. The old machine could have picked up dirt where the Electrolux had been. There’s always more dirt in a carpet. But no one ever caught on.

One afternoon a young woman came into the showroom. She lived behind the shop in a two-room apartment that made you feel lonely just looking at it. She couldn’t afford even a reconditioned economy model. I was just about to talk her into using a broom when one of the old salesmen took over. He had once told me that while he wasn’t the smartest guy around, he sure could get people to buy things. He could feed his family, which is what he cared about. After 15 minutes, the woman left with a new model, the extra power nozzle, and a booklet of high-interest payments stretching for years. She had no idea what she’d just spent.

And, yet, the old salesman was right: Who was I to tell her what size her dream should be? This was more than a deluxe vacuum; it was a promise to herself that one day she’d have the house to go with it. She was serving notice to her husband: This is how I want to live – like all these people in these big houses we see.

The old guy had sold her a dream machine. That’s what successful salesmen sell, and that’s why we keep buying.

Howard Mansfield is the New Hampshire-based author of Turn & Jump: How Time and Place Fell Apart. Send comments to magazine@globe.com.