More schools are opening their doors to students with intellectual disabilities 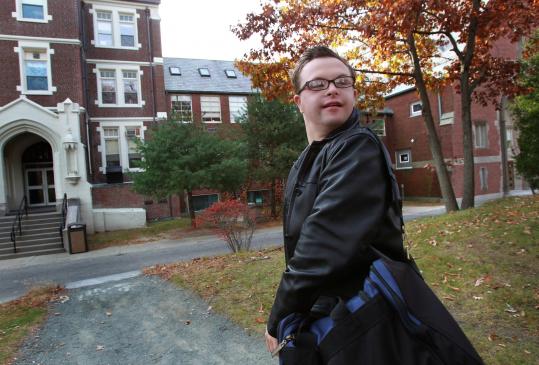 Ben Majewski, 20, has Down syndrome and is in his first semester at Massachusetts Bay Community College. (Suzanne Kreiter/Globe Staff)
By Caroline Hailey Globe Correspondent / December 5, 2010

Like many of his peers, Ben Majewski had a lifelong goal of going to college. Now, the 20-year-old who has Down syndrome and hearing problems is living out his dream despite his disability.

Majewski, a graduate of Newton North High School, is in his first semester at Massachusetts Bay Community College’s Wellesley Hills campus, taking a psychology class in career and life planning, getting tutoring, going to the gym, and making new friends.

“I got a buddy here, he has Down syndrome, he’s a veteran around here,’’ Majewski said. “He’s showing me the ropes, teaching me where everything is, and helping me meet new people.’’

Higher education used to be out of the question for students with intellectual disabilities such as Down syndrome or autism spectrum disorders, but now, there are increasing opportunities for such students to go to college in part because of a recent infusion of state and federal funds. In Massachusetts, the Inclusive Current Enrollment Initiative, a partnership between public high schools and seven community colleges that started in 2007, is helping students ages 18 to 22 with intellectual disabilities pursue higher education.

Using money from the initiative and funds appropriated by the Legislature, students with intellectual disabilities enroll in colleges such as Holyoke Community College, which has had 57 such students since 2007, participate in campus activities, and have an educational coach. The emphasis isn’t for students to work toward a degree, but rather to take classes tailored to their career interests, find paid employment before they exit school, and leave with competitive skills so they can lead inde pendent lives.

“Their self esteem skyrockets because they feel, and they do, belong here and are accepted,’’ said Jayme Finstein, coordinator for student development at MassBay, where Majewski and 15 other students with intellectual disabilities take classes. “Most of them have never advocated for themselves, so it’s an important independence builder.’’

Debra Hart, head of Think College at the Institute for Community Inclusion at the University of Massachusetts Boston, said the idea of including students with disabilities is gaining popularity around the nation at two-year colleges, as well as at four-year colleges such as Boston University and Northeastern University, which both offer disability programs.

“Why should one population never be allowed to go to college?’’ said Molly Boyle, project coordinator for Think College, which provides research, training, and technical assistance in the field. “We ask these students to dream big, and we’re seeing positive outcomes that are really powerful.’’

Margaret Nygren, chief executive of the American Association on Intellectual and Developmental Disabilities, said students with intellectual disabilities aren’t the only ones who benefit when they are encouraged to attend college. Many professors choose to rely less on lectures and more on multimedia presentations, group work, and discussion, which ends up benefiting all students. Nygren said other students also benefit from having students with intellectual disabilities in their classes because they are often inspired to work harder and not take their own abilities for granted.

Majewski, who works as a busboy at a restaurant and at the Down syndrome program at Children’s Hospital Boston where he talks with families and siblings of children with the disorder, said he’s enjoying college life and his classmates. So Majewski can hear lessons, his professor wears a small device called a personal FM listening system, which is attached to a string that can be worn around the neck. During group projects, classmates pass around the device when they speak.

Majewski, who has been to the Special Olympics four or five times for his skiing ability, said he wouldn’t mind being a social worker like his mom, or working in commercial real estate like his dad. He said he hopes his career-planning course will help him narrow down his options.