A healthy trend at medical schools

Minority enrollment rises across the board 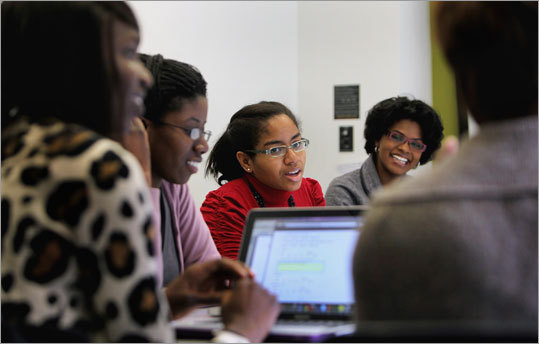 As a child, Ryan Rasmus dreamed of being a doctor. Now, the 22-year-old is a first-year student at Tufts University School of Medicine in Boston.

“There is a great responsibility that comes with this education,’’ said Rasmus, an African-American who is originally from Houston. ’’It will enable me to impact my community in ways that may increase their quality of life and their longevity.’’

More minority students like Rasmus are enrolling in US medical schools, according a study by the Association of American Medical Colleges, a nonprofit that represents all 150 accredited medical schools in the United States and Canada. Native Americans had the largest enrollment growth, at 24.8 percent, followed by a 9 percent increase for Hispanics; 2.9 percent for African-Americans; and 2.4 percent for Asians. The growth is in part due to a push by schools to attract more underrepresented minorities — African-Americans, Mexican-Americans, Native Americans, and mainland Puerto Ricans — to meet the needs of an increasingly diverse population.

“While I am pleased with the gains our institutions have made this year with regard to diversifying their incoming classes, the real value of these efforts is . . . the result that diversity engenders—a richness of experiences and perspectives,” said Darrel G. Kirsch, president and chief executive of the nonprofit.

Locally, Joyce Sackey, dean for multicultural affairs and global health at the Tufts medical school, said enrollment of underrepresented minorities at Tufts more than doubled from 6 percent of the entering class in 2009 to 13 percent this year. She attributes the growth in part to an increasing number of scholarships for economically disadvantaged students, which has led to enrollment gains across the board.

Boston University School of Medicine’s early acceptance medical program has helped boost minority enrollment, said Jonathan Woodson, an associate dean at the school. The program provides a more gradual transition into the curriculum through provisional acceptance into medical school at the completion of two years of undergraduate study.

As a result, Woodson said that “underrepresented minorities make up 18 to 23 percent of our population, compared to 9 to 16 percent at other schools.’’

Still, he said: “Several issues still need to be addressed, primarily preparation for professional school as well as support for students while they are in medical school.’’