The test of equality is diversity at the very top 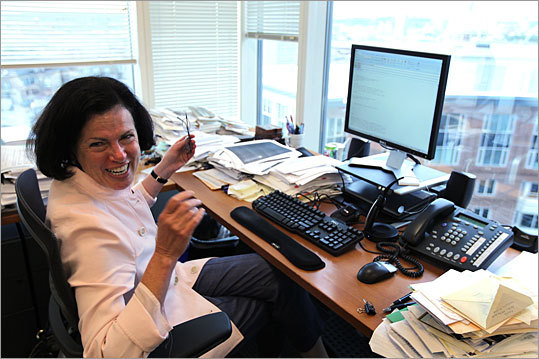 THE FIGHT TO BALANCE the boardroom has yet to be won. The number of female executive officers in the state’s 100 largest public companies, as surveyed last year by the professional women’s group The Boston Club, was at its lowest point since measurements began in 2003.

That’s not to say there’s been no progress. When you examine the Globe’s Top Places to Work winners, some organizations rise to the top: those that are making sure the career path for women runs all the way to the executive suite. Here are three that, according to employees and managers, are establishing mentoring programs, providing training, and making real progress, from bottom to top.

At the Boston economic consulting firm Analysis Group, where female executives account for almost 30 percent of the principals and 40 percent of directors, the secret is flexibility. The company says its focus on maintaining an ideal work-life balance for every employee has built a diverse, talented, and loyal group of employees. One example: Staff members are eligible for a 12-week paid maternity leave, with options for extensions.

Truly flexible work hours mean a number of female employees that work either less than full time, or part-time from home. And the firm is mindful of the disruptive effects of frequent travel on home life, limiting the trips workers must take.

The commitment to upward mobility comes right from the top, with chief executive Martha S. Samuelson driving home the message every year in a speech to new staff at the company’s annual orientation session.

“I’ve been at jobs before where putting your family and your outside commitments second to your job was very important to the organization, and people felt that they had to sneak around to honor their personal commitments. To me, just the opposite is the right way to run an organization,’’ Samuelson said. “So many times there’s a new employee who tells me they want to coach their kid’s team, or take music lessons, or go on a long trip, or whatever, and I say, ‘You don’t need to run that by me, and more power to you.’ ’’

At the beginning of 2009, there was only one woman among the vice presidents at the digital marketing company e-Dialog, and the senior executive team decided something had to be done.

The first step was to appoint Renee Pecor to serve as senior vice president of human resources, and Pecor has made it a priority to highlight the accomplishments of women in the workplace.

Earlier this year, Pecor launched a program for newly promoted employees, with a focus on women mentoring women. “Early in my career, I worked for a woman who went out of her way to involve me in real business problems and expose me to decision makers by putting me on particular projects or committees,’’ Pecor said. “Most importantly, she taught me how to navigate the mostly male corporate world, and supported me toward new opportunities. Since then, I have made it my mission to support women in the workplace.’’

This fall, e-Dialog plans to start a working moms group, connecting female employees to options for child care, financial planning, and other needs. Efforts like that highlight gender issues, but they have also created some friction, Pecor said.

That settled that, according to Pecor. “However, without female sponsorship, this situation may not have had this result,’’ she said. “I have found that if someone isn’t paying attention to it, not much happens. I have increased the leadership teams in almost every place I have worked to 50 percent female. We are at 30 percent at e-Dialog, so still a little ways to go.’’

Women account for three of the eight members of the senior management team and 18 of the company’s 27 managers at Leominster Credit Union — impressive for an organization with just 128 employees.

The credit union has a diversity charter, participates in annual reviews of its efforts to achieve a diverse workforce, and consistently scores very high on gender-based affirmative action audits conducted by an outside company, according to Gordon R. Edmonds, president and chief executive.

“We have an extremely talented, dedicated, and professional pool of women in management,’’ Edmonds said.

The company’s “Respectful Workplace Charter,’’ signed by all senior managers, lays out core values for the organization, including “valuing each other’s uniqueness and contributions and ethnic and cultural diversity.’’

Other signs of success: In the past few years, the credit union has seen a greater percentage of women being promoted into middle-management positions such as assistant vice president. Many of these women started as tellers and clerks, and rose up through the ranks by taking advantage of the credit union’s training, tuition reimbursement, and mentoring programs.