Large, midsize, or small, there’s an organization that’s just right for everybody 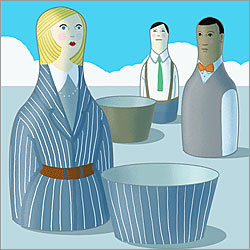 Let’s face it: By virtue of size alone, the work experience at a multinational corporation employing thousands will differ from that at a midsize firm with hundreds of workers, or a small business employing dozens. It’s a key reason that this year’s Top Places to Work ranks Massachusetts’ best employers in three categories: large, midsize, and small. “A lot depends on the individual company,’’ said Pennell Locey, senior consultant at Keystone Associates, a Boston career management firm. “But you have to consider the size of the firm, because the cultures will be different.’’

Large employers also provide professional connections that can propel careers, said Brad Harrington, executive director of the Center for Work and Family at Boston College. For example, said Harrington, has such an extensive alumni network that many chief executives at Silicon Valley firms have, at one time or another, worked for the technology giant.

Still, in a big organization, “you are a small fish in a big pond,’’ said Harrington. “A lot of times, people start in a position in which they feel they don’t have very much of an impact.’’

Small organizations put workers much closer to decisions and decision makers, specialists said, providing more chances to have an impact. If large companies encourage employees to specialize, small companies allow workers to take on many roles and gain an array of skills and experiences.

“Smaller companies tend to have a lot less structure, and you might be able to be a Jack- or a Jill-of-all-trades,’’ said Tracy Cashman, general manager of the information technology division of Winter, Wyman Cos., a Waltham staffing firm. “They tend to be more personalized, more collegial, and more comfortable for people who don’t like to be just another number.’’

Michael Gaskins, associate director of career services and internships at the University of Massachusetts Boston, said his own work history illustrates the relative benefits of large and small organizations.

Before joining UMass, Gaskins worked in the career office of the New England Conservatory in Boston. The staff consisted of Gaskins and the office director. That meant Gaskins did everything from publishing job listing bulletins to organizing career workshops to advising students.

At UMass, with four career specialists reporting to him, Gaskins delegates a lot of that work. He gets paid more, but the challenges are bigger. For example, job fairs he organized at the conservatory were intimate gatherings with 10 to 15 employers. At UMass, they involve hundreds of students and more than 90 employers.

“At the New England Conservatory, I had a lot of different types of experiences that I leveraged to get hired at UMass,’’ Gaskins said. “Working with a larger organization now, there’s more room for upward mobility and a lot more growth potential.’’

Midsize organizations can offer the best of both worlds; large enough to provide career paths, but small enough that employees don’t feel like just another number. On the other hand, employees may find midsize employers don’t provide as much access to decision makers as smaller ones, nor as many chances for promotion as large ones, specialists said.

Employment specialists stressed that not all employers fit these size patterns. For example, a large organization might be organized into smaller units that are as intimate, flexible, and entrepreneurial as start-ups. At the same time, ownership at some small businesses can be as rigid as the most bureaucratic corporation.

Meanwhile, economic changes driven by globalization and technology have transformed relations between employees and employers of all sizes. For example, large corporations have traditionally been viewed as offering greater job security, but recent recessions have shown that they are as quick — or quicker — to jettison workers as small firms.

“We’ve reached a point where we’re all really self-employed,’’ said Boston College’s Harrington. “It’s a do-for-yourself world, and the small company attitude of ‘roll up your sleeves and get it done’ is probably a healthier attitude for no matter where you want to go.’’

R obert Gavin can be reached at rgavin@globe.com.