I come here for the food 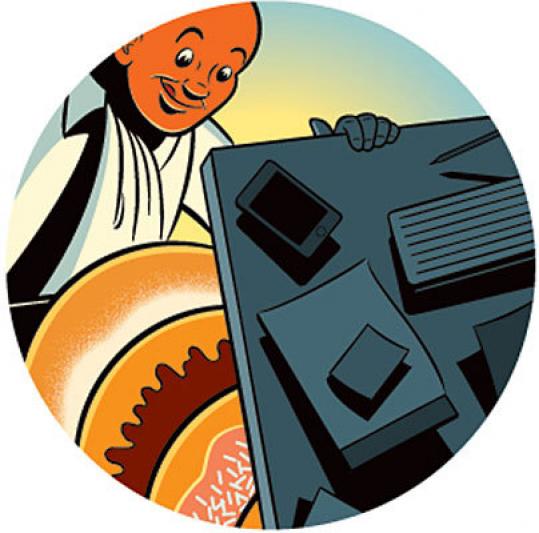 THERE IS SUCH a thing as a free lunch. You just have to work for a company in the business of feeding people. At companies such as Dunkin’ Brands and Legal Sea Foods, eating is one of the perks of employment.

It’s not just America that runs on Dunkin’. It’s Dunkin’ itself. The Canton headquarters of Dunkin’ Brands features a traditional cafeteria run by . There, responsible employees can purchase sandwiches, salads, and other square meals. Everyone else may be in trouble. Dunkin’, which owns Dunkin’ Donuts and Baskin-Robbins, also offers a selection of its own products. For free. Serve yourself.

Amazingly, unlimited sundaes, lattes, and Boston Kremes haven’t created the wired and weighty workforce you might envision. “We have a gym here, too,’’ said spokesman Andrew Mastrangelo. “And there’s decaf.’’

Lynn manufacturer Durkee-Mower is too small to have a cafeteria, but it still wants to keep employees happy. It provides them with peanut butter, bread, and an unlimited supply of its famed Marshmallow Fluff.

Fluffernutter sandwiches are certainly delicious, but whether one wants to consume an unlimited supply of them is another story. “I’m getting up there in age,’’ says Paul Walker, vice president of manufacturing. “I have one maybe once every two weeks.’’

At Legal Sea Foods, a cafeteria serves free breakfast and lunch. “As you might expect, the vast majority is seafood,’’ said Roger Berkowitz, Legal’s chief executive. There is also a salad bar, soup, fresh fruit, and a view overlooking the harbor.

A free lunch is a benefit for anyone working in the building, but it is also good for Legal itself.

“Oftentimes, lunch is a focus group, although the people eating it don’t necessarily know,’’ Berkowitz says. Dishes created in the on-site test kitchen can wind up on employee plates. Right now, the Boston company is working on recipes for its Seaport District flagship, expected to open in the spring. “You never know what you’re going to get. Dessert today is lychee sorbet. We’ll see how they react to it.’’

There is one ingredient that is always assured of a good reception. “When we’re looking at different recipes for lobster, word spreads,’’ Berkowitz says. “You have to get down early for that.’’

The Dedham headquarters of Papa Gino’s/D’Angelo Grilled Sandwiches also features test kitchens. In the Papa Gino’s area, “there’s a pizza oven, and on the D’Angelo side a grill and a fryer,’’ says Michael McManama, senior vice president of brand development. Samples are frequently available — for instance, Angus burgers or turkey chili being tested for D’Angelo, or new varieties of calzone for Papa Gino’s.

There is also a Papa Gino’s on the floor below the offices, and corporate team members get a 25 percent discount.

Employees at Uno, based in West Roxbury, can make their own lunches in one of two full kitchens. There, soda and coffee are free. Or they can order from a specially priced employee menu — someone drives the company van over to Uno in Dedham each day to pick up the food.

“At noon, there’s a call over the intercom,’’ says senior vice president of marketing Rick Hendrie. “It’s the same every day. ‘Lunch is HERE!’ It’s like a cock crowing. We know it’s time to get up.’’

The rest of the week is less virtuous. “We have doughnuts or Munchkins,’’ Hendrie says.

Wait a minute. Uno runs on Dunkin’ too? “Dunkin’ is a New England tradition,’’ Hendrie says. “Everything else is pure Uno.’’