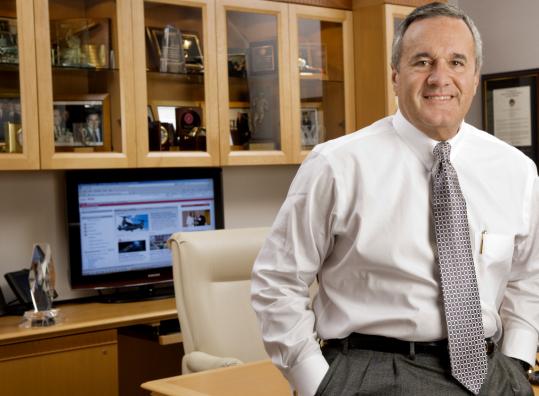 “That’s a frightening problem for a company like ours,’’ Swanson said in a speech to the Greater Boston Chamber of Commerce yesterday. The only hope, he said, is a dramatic increase in the number of Americans who earn degrees in the sciences, engineering, and mathematics.

Massachusetts leads the nation in primary school science education, Swanson said, noting that 52 percent of the state’s eighth-graders are proficient in math; the national rate is 34 percent. But, he said, as young people enter high school, their technical competence begins to ebb.

Swanson said that of 4 million Americans in ninth grade in 2001, 30 percent dropped out of high school, fewer than 280,000 majored in a technical field in college, and only 167,000 will earn a scientific or technical degree by 2011. Of those students, said Swanson, only 64,000 will become engineers. “Compared to China, India, and other parts of the world,’’ he said, “it’s a drop in the bucket.’’

Raytheon, based in Waltham, now commits 60 percent of its charitable giving to activities that boost math and science education, Swanson said. The company is working with the Bill and Melinda Gates Foundation to sponsor research on increasing the number of technically trained graduates. Raytheon engineers have developed a mathematical model to simulate the performance of the nation’s schools, in an effort to predict which reforms are most likely to succeed.

But Swanson made it clear that he has found no easy answers. Raytheon has developed systems that can shoot orbiting satellites out of the sky, but Swanson called his efforts at education reform “one of the hardest topics I’ve ever worked on, in my 39 years at Raytheon.’’