When stints on payroll hurt the jobless 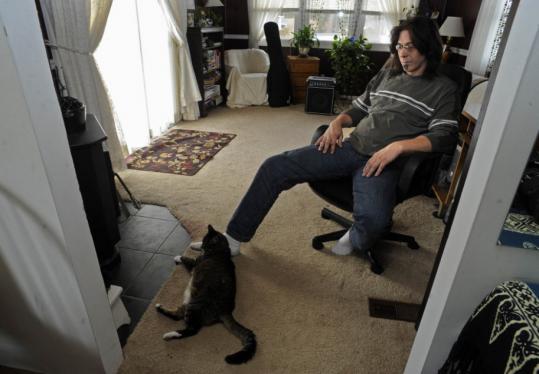 Gary LaPlante’s unemployment benefits were slashed to $178 a week from more than $600 because he had accepted a three-week construction job. (Mark Wilson for The Boston Globe)
By Robert Gavin Globe Staff / February 17, 2010

After nearly a year without work, Gary LaPlante was happy to take a three-week construction job. What he didn’t know was that the job would cost him more than two-thirds of his benefits when he went back on unemployment.

LaPlante, a union carpenter, is among thousands of unemployed in Massachusetts and across the nation who are discovering an unexpected kink in the system that can mean drastic cuts in their unemployment benefits.

Workers who seek to renew their benefits for a second year - not uncommon during this recession - are finding that their new benefits are based on their most recent wages, even if it was low pay for temporary or part-time work.

LaPlante’s benefits, for example, were slashed to $178 a week from more than $600. He was forced to move in with a friend, who supported him for several months before he found a full-time job a few weeks ago.

“You can’t take care of yourself with that amount of money,’’ said LaPlante, 42, a member of Carpenters Local 40 in Cambridge. “I don’t think people should be penalized for working.’’

Workers who do not work during their first year of unemployment do not risk changes in their benefits when they refile for a second year.

The danger of cuts when refiling claims for a new year applies even though Massachusetts allows people to work part time and earn up to one-third of their weekly benefit without reducing their unemployment checks.

The state has no firm estimates on how many workers have been affected by the glitch, but thousands of claimants work temporary or part-time jobs while they are receiving jobless benefits. In the week ending Feb. 6, about 15,000 unemployment recipients reported part-time earnings, according to the state Division of Unemployment Assistance.

The depth and duration of the recent recession have twisted a system designed to help people through short bouts of unemployment, officials said. Normally, unemployed workers in Massachusetts do not collect benefits for an entire year. The limit is 30 weeks, with workers allowed to refile a claim after a year if they worked in the previous 12 months. That rule was meant as an incentive for unemployed workers to take part-time or temporary jobs.

But with federal extensions making unemployed workers eligible for nearly two years of benefits, that incentive has become a penalty. Federal law requires states to adjust benefits after a year for people who worked in the previous 12 months. Workers who were unemployed more than a year, and who took a short-term job during that time, have benefits based on the wages from that temporary position, which are often less than their permanent wages.

Chi Ming Lau, 48, of Billerica was laid off from his manufacturing job in October 2008. Nearly a year later, in September, he was called back for three weeks. When he refiled his unemployment claim a few weeks later, the callback cost him a quarter of his benefits, slicing his weekly check to $475 from $624 a week.

“I should just have sat home and done nothing,’’ said Lau.

Worker advocates such as Greater Boston Legal Services and the Massachusetts AFL-CIO said they are hearing from more and more workers who sustained deep benefit cuts because they took part-time or temporary work over the past year.

“Unemployment is supposed to get people through these tough times, not make it harder,’’ said Tim Sullivan, spokesman for the Massachusetts AFL-CIO. “This is punishing the people who went out and did the right thing.’’

The Patrick administration has been pressing Congress for months to change the law and correct the situation. As early as November, state labor officials sent a letter to congressional leaders to make them aware of the problem and to push for a fix.

“We’re pressing as hard as we can,’’ said Joanne Goldstein, state secretary of Labor and Workforce Development. “Individuals are ending up in a worse situation because they want to work.’’

US Senator John F. Kerry, meanwhile, has cosponsored legislation to fix the problem. The Massachusetts Democrat is also seeking to extend federal unemployment benefits, which expire at the end of this month, and include provisions to stop penalizing people for working.

In a letter to the Senate Finance Committee chairman, Max Baucus, Kerry cited an unnamed Billerica electrician whose benefits were slashed to $400 from $678 a week because he worked part time as security guard. Workers, Kerry wrote, are being “discouraged from working part-time or losing benefits from working part-time - exactly the opposite of what should happen in an economic downturn.’’

Sara Scott, 36, of Somerville, was laid off just over a year ago. She took a three-week temporary job in May, processing applications for a charity. She earned nearly $1,500.

When she recently called the state unemployment office to file for an extension, she learned that her benefits, now $468 a week, could be cut because of that job. Her claim is still under review, and a final determination hasn’t been made.

“It’s incredibly stressful,’’ she said. “I thought I knew how I was going to pay my rent. I thought we were supposed to work when we could.’’