Military experience, some find, is tough to translate on resumes 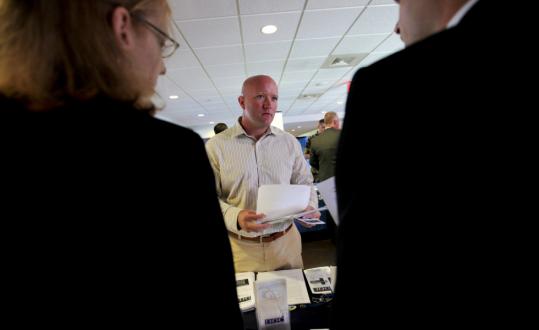 Sean Kellenberger, a Marine Corps veteran, hopes to find a job as a cop or a firefighter, but his search has been frustrated by his injuries. (Rose Lincoln for The Boston Globe)
By Katie Johnston Chase Globe Staff / September 27, 2009

Brian Robinson has never had a hard time landing jobs, but he has had a hard time keeping them. Since he left the Marines nine years ago, Robinson estimates he has held about 20 jobs, as diverse as selling furniture and throwing drunks out of bars. But nothing has fulfilled him like the Marines.

“I came home and I didn’t know where I fit,’’ said Robinson, who was a sergeant in the infantry. “It almost felt like my purposefulness had run its course.’’

When veterans return to the workforce, they face challenges that their civilian counterparts don’t - issues only amplified by the abysmal job market that has left one in six Americans unemployed. They often find that the skills they learned in the military don’t always apply on the outside, and the years of civilian work experience missing from their resumes don’t help either. As a result, some wind up hopping from job to job, searching for work that gives them the sense of service that they found in the military.

The military instills qualities that most employers dream of - discipline, leadership, teamwork, flexibility, respect for authority, ability to handle stressful situations, top-notch technical skills - and many companies actively recruit veterans. In fact, veterans have consistently had lower rates of unemployment than nonveterans: In August, the rate for veterans over the age of 18 was 7.7 percent, nearly two percentage points lower than among nonveterans.

But the qualities ingrained by the military don’t always show up on a resume, and veterans are often surprised that their experience isn’t easily understood - or more valued - in the civilian workplace.

“For many veterans, it’s really not realizing how much you bring to a potential employer and how to market that skill,’’ said Coleman Nee, undersecretary of the Massachusetts Department of Veterans’ Services.

Chad Brower, who served in the Marines and the Air Force for 17 years, has even started downplaying his military accomplishments in interviews and playing up other achievements that he thinks civilian employers can more easily relate to.

“You’d think that the military would be a good differentiator, that it would give you a leg up over someone who doesn’t have military experience,’’ said Brower. “But that hasn’t been the case.’’

Brower, 41, of Brimfield, is one 19,000 Massachusetts veterans who have served in Iraq or Afghanistan. He worked security at a base in Saudi Arabia where insurgents’ bombs were a constant threat and oversaw day-to-day law enforcement at Hanscom Air Force Base in Bedford, among many other duties.

After taking a medical retirement in 2006, he earned four degrees in three-and-a-half years: two associate’s degrees, a bachelor’s in operations management, and a master’s in business management with an emphasis in security and emergency management.

Despite his education and experience, though, Brower has found work hard to come by. He’s hoping to land an industrial security gig - a government position that comes with a high level of security clearance - and has applied for about 150 jobs since graduating from Boston University in May. But the one position he’s been offered, as a security manager for a small company with little potential for growth, was a letdown. As Brower’s job search drags on into the fall, he’s getting used to being the primary caretaker for his two daughters - he and his wife are expecting a son in November - and learning to handle rejection.

Brower said that being a 25-year-old sergeant in charge of 45 troops and millions of dollars worth of equipment in life-or-death situations “grows you up fast,’’ but that responsibility doesn’t necessarily translate on paper. “When they come back, they get seen by employers as a 25-year-old kid.’’

Military personnel do get help reentering the workforce when they return home. The Massachusetts Department of Veterans’ Services has received nearly $1 million worth of grants from the US Department of Labor this summer to reintegrate homeless veterans into the labor force and assist veterans in getting into green industries. Veterans also benefit from preferential hiring practices - often through a points system.

But the points earned by Sean Kellenberger - a bald, brawny 27-year-old with scars and bits of shrapnel still embedded in his hands - haven’t helped much so far. Kellenberger had been in Iraq for less than three months when the Humvee he was in hit a roadside bomb. He was standing up, holding a machine gun out the turret, when the shock wave knocked him unconscious. He spent two weeks in four hospitals being treated for shrapnel wounds and a concussion. Three years later, he was back in Iraq.

Kellenberger, who returned to Brighton, and his wife, in April after he was honorably discharged, is looking for a job that will allow him to keep serving the public. Every male in his family, which arrived in the United States from Europe after World War I, has served in the military and gone on to become a firefighter or police officer. Kellenberger hopes to follow in their footsteps. He has taken four civil service tests and is taking more in hopes of finding work with the likes of the Boston Police Department or the Pentagon Force Protection Agency.

“It’d be nice to have a job where you’re proud to show other people,’’ he said.

But the search hasn’t been easy. After taking a physical for a Border Patrol job, he received a letter saying he wasn’t medically cleared, citing his hand injuries and headaches, which he says have long since cleared up.

Kellenberger spent $1,350 out of his own pocket to take another physical a few weeks ago and is awaiting a response. In the meantime, he’s back in school at UMass-Boston.

Brian Robinson would settle for just any job at this point, but what he’s really searching for is the fulfillment he found in the military. Robinson, a stocky 34-year-old with close-cropped red hair and sad eyes, grew up poor, raised by a single mom in a one-bedroom apartment in Lowell.

He signed up for the Marines at age 18 and thought he’d found his calling. He spent his days jumping out of planes and rappelling “off anything you can imagine.’’

But it all came to a crashing halt in 1999 when he was double-timing down a mountain in California and stepped in a hole, twisting his left kneecap three-quarters of the way around. Six months of muscle atrophy and physical rehabilitation later, he was on his way home. “It broke my heart,’’ said Robinson, who lives with his wife and two young children in Framingham.

He tried over and over to reenlist after his honorable discharge, but the injury stopped him every time. He spent a year living on the beach in San Diego, got an associate’s degree in communications while interning at a radio station, and started drinking heavily.

Robinson, who has been diagnosed with post-traumatic stress disorder, completed a six-month alcohol rehabilitation program a few weeks ago and has been looking for a job online ever since.

He has applied for half a dozen positions, including jobs helping other veterans and troubled boys, and landed an interview for a field technician spot through a recent RecruitMilitary job fair at Gillette Stadium.

Robinson’s wife just landed a job with the town of Framingham after being laid off for nine months, and they’ve been surviving on food stamps, disability payments, and help from their parents. But Robinson knows he needs more than a paycheck.