State pushes a wave of construction 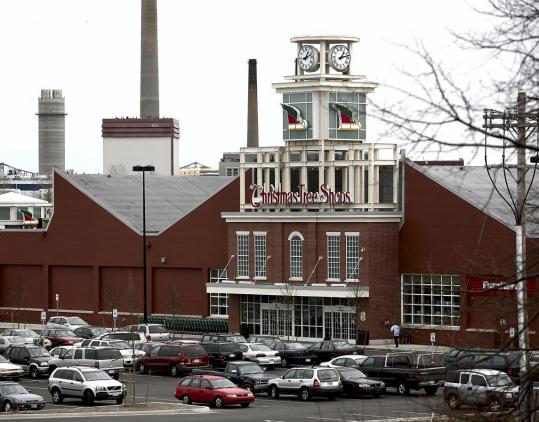 Governor Deval Patrick’s administration will spend hundreds of millions of dollars this summer building roads and highway ramps for at least five struggling private developments - from the former Naval air station in Weymouth to Somerville’s Assembly Square - in hopes of jump-starting construction and the local economy.

The money, a combination of federal stimulus money and state funds, will not go directly to the private developers, but rather for public works that Patrick aides said they expect will make it easier for companies to arrange financing in otherwise tight credit markets. That, in turn, would kick off construction of the planned office parks, shopping centers, housing, and hotels that will create new jobs.

Although more projects may be chosen later, the ones already approved include not only SouthField in Weymouth and Assembly Square, but a new business park in Fall River that will recruit biotech companies, the Westwood Station project, and Waterfront Square at Revere Beach.

The state’s immediate goal is to start work in the current construction season, with the first five projects receiving $20 million to $60 million in public works improvements. Patrick officials expect to officially an nounce the funding commitments over the coming weeks.

“The projects we will be announcing will change the way we grow and develop over the next 10 years,’’ said Gregory Bialecki, the Massachusetts secretary of housing and economic development. “What we’re trying to do is create the places that will be our new employment centers.’’

The federal funds will come out of an $800 million allotment for transportation projects Massachusetts received from the stimulus package.

Initially the Patrick administration used some of that federal money for simple projects such as road paving. But it now wants to target improvements that have the ancillary benefit of creating additional economic growth.

“Now, we’re able to look over the horizon and go after the big picture things we’re trying to do,’’ Bialecki said.

In Somerville, Mayor Joseph Curtatone called the selection of the Assembly Square project a major benefit for his city, which like many communities is struggling to fund public services with less money.

“This project will do a lot to stabilize our future,’’ Curtatone said of the proposed development. “It will allow us to invest in education, public works and public safety. It’s the most important project in the city.’’

The state is still sorting through the list of projects that have applied for public aid, and more may be added in the coming months.

One is Columbus Center, an $800 million condominium, hotel, and retail project over the turnpike in Boston that has been unable to arrange private financing.

Another request that is too large to fill came from Gale International and , developers of the Filene’s block in Downtown Crossing, which Bialecki said were looking for as much as $300 million in assistance.

In downturns in the early 1990s and 2001, Massachusetts lagged the national economy in its recovery, taking months longer to restore jobs and production lost during the contraction.

The new spending initiative is an attempt to reverse that trend, although it is unclear just how quickly some of these private developments can get underway and contribute to the economy.

The five projects chosen so far are all ambitious:

◼The Assembly Square project in Somerville includes retail stores such as Ikea, office buildings, and more than 2,000 residential units.

◼The former South Weymouth Naval Air Station would become SouthField, a minicity with more than 2,800 housing units, golf course, stores, offices, and movie studios. State officials are arranging financing to build an access road that would connect the development with routes 3 and 18 and cost about $60 million.

◼At Waterfront Square at Revere Beach, Eurovest Development is planning to build a $500 million mixed use project that would include more than 900 housing units, a hotel, and 200,000 square feet of stores, restaurants, and offices. The state is considering upgrades to the MBTA’s Wonderland Station as well as the network of roads around it.

◼For Fall River, the state will build an off-ramp from Route 24 that would allow officials to add new space next to the city’s 500-acre Industrial Park for biotech companies.

◼The $1.5 billion Westwood Station project includes hundreds of housing units, retail stores, and offices on a large site opposite the Route 128 Amtrak station. The developers want help building a new highway interchange at interstates 95 and 93 that would improve traffic flow around the project, which is projected to create about 3,700 construction jobs and as many as 9,000 permanent jobs.

“We have one or two critical tenants that are still waiting to see what happens with the road system. And if these commitments come through, we can get financing to move the project forward soon,’’ said Jay Doherty, chief executive of developer Cabot, Cabot & Forbes.

Clarification: A Page One story yesterday about development projects the Patrick administration has selected to benefit from public works spending should have made clear the list was preliminary and subject to final approval.

© Copyright 2009 Globe Newspaper Company.
GETTING A BOOST
UNLIKELY TO BE FUNDED