Forced by recession to cut back, families find new ways to connect 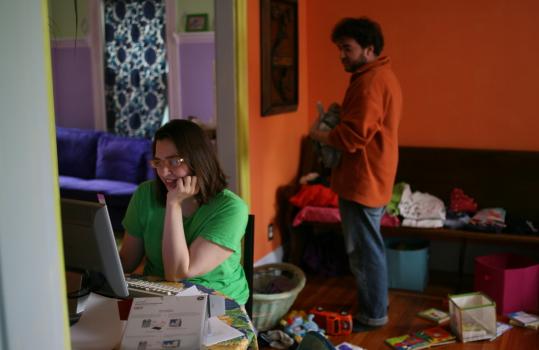 Necessity has pushed Ariel and Amiri Ayanna to downshift their finances - and life. But that has been a welcomed change for their family.

Ariel Ayanna lost his $170,000-a-year corporate law job in December, and the Somerville family of four is making do on $35,000 a year in unemployment and savings. But the job loss had some unintended perks: The family was able to save money - and spend more time together - on a two-week camping trip to attend a cousin's Texas wedding. And Ariel, who is considering becoming a stay-at-home dad for a year, is around more often to cook, practice violin with their 5-year-old son, and play with their 9-month-old son.

"It's hard to slow down. It's hard to step back," says Amiri Ayanna, who plans to begin a master's degree program at Harvard Divinity School this summer. But "it's a blessing in disguise."

The pains of this recession, with its millions of layoffs, shattered investments, and rising tempers, can't be glossed over. Yet amidst the crisis, families are finding gains that are, as the MasterCard ads say, priceless. Shrunken budgets are prompting more homemade entertainment, home-cooked meals, and pioneer-type survival strategies for families - all changes that slow down the pace of family life and the recent emphasis on materialism.

However it's defined, slow, a phi losophy that emphasizes quality rather than quantity in every aspect of life, is certainly hot. Reacting to the overdrive and greed of the boom times, movements for slow food, and now parenting, have evolved. Two Texans who founded the burgeoning Slow Family Living group, www.slowfamilyliving.com, last year in Austin are planning fall workshops in Boston for families seeking to turn recession-inspired downtime into renewed togetherness.

"People are really searching for ideas," cofounder Bernadette Noll, a writer and mom of four, told me by telephone. Her cofounder, psychologist Carrie Contey, chimed in: "And inspiration, and permission to go forward with this."

Carl Honoré, a writer who is a guru of the slow living movement, agrees that the time is ripe for rethinking the recent climate of excess. "This economic change means that we have a kind of clarity about things," says Honoré, the author of "In Praise of Slowness" and "Under Pressure: Rescuing Our Children from the Culture of Hyperparenting."

"Now is a time to retrench and reset our family metronome," he said by telephone from his home in London.

For some moms, banding together to trade notes on scaled-down living is especially reassuring today. At the two-year-old North Shore chapter of the ecoconscious national nonprofit Holistic Moms Network, members often trade notes on organic food and cloth diapers. But now there's a new urgency to their efforts to simplify, says member Barbara Holbrook, a stay-at-home Andover mother of two whose husband, an audio-video design engineer, recently experienced a pay cut.

"You start thinking in times like this, 'How did my grandmother do it,' " says Holbrook. Rather than take her kids, ages 5 and 2, to a costly indoor gym or an amusement park and a restaurant lunch, Holbrook plays in the backyard with them. Swim lessons may be the kids' only structured summer activity. But the trade-offs are worthwhile. "There is a silver lining to slowing down and focusing more on the things you already have. We already have a lot."

Like Holbrook, many moms find that budget cuts that at first seem like deprivations instead have unexpected rewards.

As Natalie Engler's work as a freelance medical writer has ebbed, she's scaled back on meals out and substituted library books for bookstore purchases. Although she also teaches a burgeoning load of yoga classes, she feels less overloaded and more calm - especially when she's with her two children, ages 7 and 9.

"I'm making more conscious choices," says Engler, who lives in Sudbury. "Initially it was hard, but it wasn't as hard as I thought it would be."

Who knows? Perhaps the recession-inspired slowdown will benefit our children - the future workforce, says Lenore Skenazy, author of "Free-Range Kids: Giving Our Children the Freedom We Had Without Going Nuts With Worry."

"What we forget in the macro-picture is that humans are resourceful," says Skenazy, a New York-based mother of two preteen boys. "What we've been adapting to until recently is incredible affluence, and what rushed into the void was more pay-per-fun and supervision of kids than ever before. What we're going to go back to is do-it-yourself fun."

Editor's note: A story in last Sunday's Money & Careers section on how the recession is affecting family life said that Ariel Ayanna is considering becoming a stay-at-home father for a year. After the story ran, Ayanna, who lost his corporate law job last year, said he never meant to suggest that, and is not considering staying at home. Rather, he is looking for a job.