For some, being laid off stirs the entrepreneurial spirit 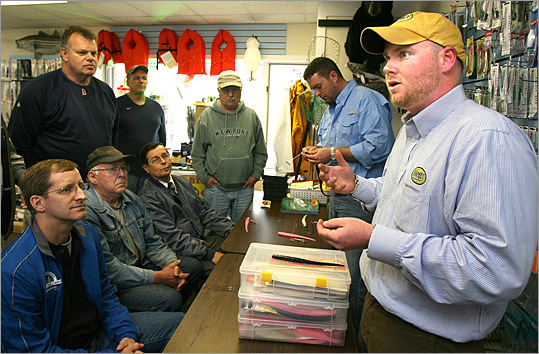 Michael Hogan, right, of Falmouth teaches local fishermen how to use and rig the plastic fishing lures he makes. He used his layoff severance pay from AT&T to start "Hogy," his lure company. ((Tom Herde for The Boston Globe)
By Jaci Conry Globe Correspondent / May 10, 2009
Text size – +

In 2001, Peter Rinnig was laid off as art director at the Internet search firm Lycos Inc., joining thousands of technology workers left jobless by the dot-com collapse. After several months of searching for work without success, he decided to turn a sideline, designing T-shirts, into a career.

Today, Rinnig owns QRST's, a Somerville screen-printing and T-shirt maker that he bought in early 2002. Seven years later, the company has tripled sales, expanded into a wide-range of apparel, and increased employment to six from two.

"I would never have done this had Lycos not imploded," said Rinnig, 45, of Brookline. "But when you get laid off, you are forced into a situation. You realize you might have to get creative to find a new job."

Rinnig is among many workers who use layoffs to become their own bosses, often turning interests and hobbies into moneymaking enterprises. Some, like Rinnig, buy businesses; others build companies from scratch. Still others use expertise gained in their old jobs to work from home as consultants and freelancers.

In some ways, it's a good time to start a company, despite the recession. The recently enacted federal stimulus package has made it easier and less expensive for small businesses to obtain financing, according to Robert Nelson, director of the Massachusetts office of the US Small Business Administration.

Financing, however, is only one factor that would-be entrepreneurs should consider, according Nelson. They need to research and identify markets; obtain licenses, permits, and insurance; and understand taxes. It's also important to understand a variety of legal issues, including fair business practices.

"Before you jump into starting your business, you need to do your homework," said Nelson.

To finance the cost of buying and starting his business, Rinnig used some of his Lycos severance pay and cashed out $100,000 from his home equity. He soon learned that running a business wasn't easy. At Lycos, all he had to worry about was his own job; now, he had to deal with several employees, and adjust to their personalities.

He also had to adjust to personal earnings that were at first much lower than his Lycos salary. In his first year in business, he took home $200 a month.

"This isn't a 40-hour-a-week job. I'm working harder than I ever have in my life," Rinnig said. "[But] I love what I'm doing. I couldn't go back to sitting in an office cube reporting to someone else."

Neither could Michael Hogan, who opened his own fishing tackle company after getting laid off from the Boston office of AT&T Corp.'s global markets group in 2004.

Hogan, now 32, packed up his apartment in Fenway and moved to Falmouth where he launched Hogy Lure Co., which manufactures soft plastic fishing lures he designs. Three years ago, he was making his lures by hand and selling them at trade shows. Today, his eight lines of lures are manufactured at a Midwest factory and sold in more than 100 shops along the East Coast.

"Fishing is my passion," Hogan said. "To make a career doing something fishing related has always been a dream."

Using credit cards to finance his start-up costs, Hogan spent months perfecting the design of his lures, which feature a unique system for rigging hooks. He then spent countless hours filling out applications to secure trademarks and a patent, and many more developing business and marketing plans. He traveled across the country, making sales calls at tackle shops from New Jersey to Florida to California.

"Still," said Hogan, "owning your own business trumps all. I really believe in my products, so I want to work even harder."

For some, getting started is a little less complicated. For Cheryl Alkon, a Natick freelance writer, all she needed was a phone, computer, and Internet connection.

Alkon struck out on her own after she was laid off as an editor at teen website gurl.com in 2001. After sending her resume to magazines without response, she managed to land a freelance assignment as a fact-checker for Cosmopolitan.

That assignment led to a contract of several months with Cosmopolitan, which she parlayed into fact-checking and writing assignments for other publications, including Ladies' Home Journal.

"I wasn't afraid to approach editors offering my skills," she said, "and that's really important when you're freelancing."

One of the key issues for freelancers to deal with is health insurance, said Alkon. Several organizations, such as the Small Business Administration and National Association for the Self-Employed, offer good rates to the self-employed. Trade associations such as mediabistro.com, an organization for media professionals, also offer reduced rates.

For Alkon, working freelance gave her flexibility to write a book about her experience managing her diabetes during a pregnancy. The book, "Healthy Mom, Healthy Baby: Balancing Pregnancy With Preexisting Diabetes" will be published in 2010.

"I love working from home, working for myself," she said, "For me to go back to an office job, it would have to be a really phenomenal opportunity, with lots of money."