THIS STORY HAS BEEN FORMATTED FOR EASY PRINTING
Innovation economy

Lifting their dreams by the bootstraps 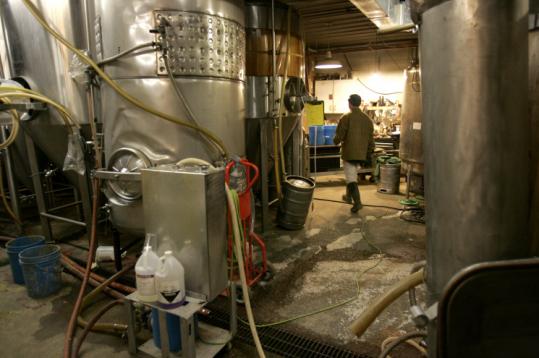 With a baby on the way and monthly payments on a new house to make, Bill Bither left his job in the aviation industry to start a software company.

The founders of Brewers on Nantucket relied mostly on wine-making equipment to make their first batches of beer, since they had free access to it at the winery where they worked - they even packaged the resulting suds in champagne bottles that they got cheap.

After cashing in his individual retirement account and borrowing from family to get an apparel website started, Greg Selkoe simply tuned out the people who told him he wasn't going to make it, and the investors who were worried their money was being sucked into a black hole.

Scrappy entrepreneurs - call them bootstrappers - don't care much if the Dow is down, if consumer spending is stagnant, or if banks aren't lending. They're obsessed by a vision of the business they want to build and motivated by the allure of controlling their own destiny, which helps them ignore barriers that would stop most mortals.

"Naivete is also a really good trait for a bootstrapper," says Bither, who left his job in 2003 after several months of moonlighting. "Better you shouldn't know what's not possible, or how hard it can be."

Today, Bither runs a 25-person software company, Atalasoft Inc., in Easthampton. So far, he has not taken outside investment. Cisco Brewers, founded in 1995, has a brew pub bearing its name at Logan Airport and is distributing its products as far away as Texas, with just six full-time employees. Selkoe's company, Karmaloop, had $45 million in online reve nue last year, and has grown to employ nearly 90.

"Common sense would tell you that the boot-strapping approach increases when you're in a recession," since loans and venture capital may not be as readily accessible, says Babson College professor Patricia Greene. "But I always point out that this is the way lots of businesses get started. When I looked at the Inc. 500 list a few years ago, most of the companies on it had been started with between $10,000 and $50,000 in capital."

Greene says that successful bootstrappers think endlessly about "creative ways to get money, and ways not to need so much money."

Massachusetts is lucky to have a high density of bootstrappers. Gordon and Kitter Spater, brothers who started Salisbury-based Motivation Designs LLC in 2003, grew up helping their parents switch from summer to winter tires. They couldn't help but notice what a pain it was to lug tires from one place to another. Kitter, who'd studied industrial design at Pratt Institute, came up with the Tire Tote, a $23 bag that makes carrying any size tire easier.

"I literally went door-to-door, visiting auto dealerships and tire stores to see if they'd carry it," says Gordon. He had better luck initially with local retailers like Direct Tire; it took nearly five years to persuade Sears to carry the product.

The company expanded its range of products when Kitter encountered another problem that needed solving: a way for him to keep his rambunctious dog from jumping into the front seat. That led to a line of travel products for pets, like the "Backseat Barrier." Other automotive products, like an organizer for grocery bags, didn't take off, and so the company ditched them so it could devote more attention to the product areas that were performing better.

One thing bootstrappers have in common is they can find clever ways to raise money. When Cisco Brewers wanted to start making whiskey - which requires at least five years of aging before it can be sold - they knew they'd need some up-front funding. "We sold whiskey futures," says Jay Harman, a partner at the brewery. "For $3,000, you'd invest in a barrel of whiskey, which contains about 200 bottles of whiskey."

They eventually sold 130 barrels, at prices ranging from $3,000 to $6,000. The revenue not only helped them jump-start whiskey production, but it also helped pay for an expansion of the brewery's headquarters on Nantucket.

Figuring out how to develop products without hiring lots of employees is another key bootstrapper strategy. Jason Jacobs is the only full-time employee of FitnessKeeper Inc., which makes a popular iPhone application that runners use to keep track of routes and distance; the other eight team members work day jobs or juggle consulting gigs. They meet twice a week in local coffee shops and on the MIT campus.

Jacobs has also found firms that are willing to help the company in exchange for equity, rather than cash. Jacobs also espouses the importance of responding to changes in the market - fast. The company started off charging for downloads of its software. But once it became clear iPhone users wanted to be able to try a free version of an application before committing to a purchase, FitnessKeeper decided to offer both a free version of its RunKeeper software (supported by advertising) and a $9.99 paid version, which includes extra features.

So few businesspeople are visibly passionate about what they do. Bootstrappers say that letting others know that they're driven by something more than just the need for a paycheck can generate surprising results. "If you are clearly excited about your idea, and you're working to make it happen, a lot of times people will say, 'I may not be interested in investing, but let me introduce you to someone else' - or they want to help you in some other way," says Selkoe.

Selkoe has come a long way in the decade since he left his job as an urban planner at the Boston Redevelopment Authority to devote more time to the growing business he'd started on the side (and finish a graduate degree at Harvard). Earlier this month, he was the sole Bostonian invited to the White House for a summit of 25 young business leaders.