THIS STORY HAS BEEN FORMATTED FOR EASY PRINTING
Balancing acts 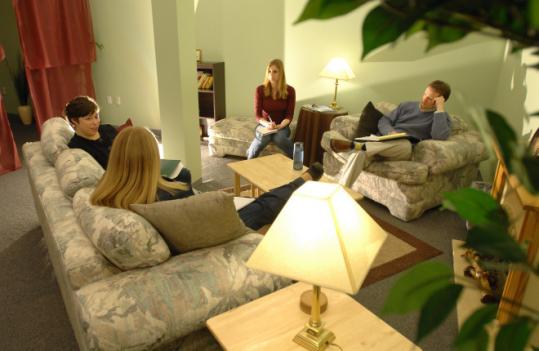 Taking the helm of troubled Lowell Co-operative Bank after a shake-up, Rich Bolton turned his recent first meeting with employees into a rollicking game show, handing out cash prizes to give staff a needed lift in difficult economic times.

Meanwhile, yoga and meditation are new offerings at Artreach Inc., a Norwich, Conn., nonprofit that offers theater- and art-based social rehabilitation to adults with psychiatric disorders.

The aim? De-stressing employees, who are so anxious about layoffs, overburdened from job and budget cuts, and distracted by declining family finances that they often can't put their best foot forward - just when companies need them to shine.

"There's this feeling that the sky is falling around us," says Bolton, who led a private investment group in buying and recapitalizing the bank in January, after losses on construction loans sapped the institution's capital. "But until we start taking a positive approach, the sky will continue to fall. It starts right here in this room with these employees."

To break the ice and give his new workforce of 34 a "boost-up," the new chief executive officer handed out $1,000 worth of $20 bills to employees who asked a question, correctly an swered quiz questions on the city's or the bank's history, or came up afterwards to shake his hand.

The Feb. 25 employee meeting went on for two hours, double the norm. His only condition: spend the money in Lowell.

"We wanted to let them know there was a future here," in the city and at the bank, said Bolton, who funded the event with money from the institution's general budget.

Even difficult news, if honestly put, helps employees at these times more than silence from management.

But what is stress?

In moderate doses, stress in life is healthy. A tough work project, a roller-coaster ride, or a presentation are stressors that stimulate us.

But a trauma or long-term chronic stress - the kind many of us now face economically - overwhelms the body, keeping us flooded with hormones that at first boost us up, then wear us down.

On the job, a sense of powerlessness particularly raises stress levels, which is why secretaries, waitresses, middle managers, police officers, editors, and medical interns - who all face sometimes overwhelming or even traumatic situations - are among the most highly stressed workers, according to the American Psychological Association.

More than 65 percent of workers currently describe their job as somewhat or very stressful, according to a February survey by Raleigh, N.C.-based consulting firm Workplace Options. Nearly 50 percent reported being unable to concentrate at work due to worries about family debt.

To buoy the 150 employees at World Travel Holdings' Woburn headquarters, Hanssen, the human resources director, and her team asked workers to write on the walls of an old storage space to suggest how to transform the room into an "oasis" for creativity and relaxation.

"You give tough and honest news to employees in these times," said Hanssen. "We wanted something to balance that."

Per their suggestions, the room has been decorated with comfy low-cost furniture found online or at the discount outlet Building 19. This month, the company will also offer popcorn and screenings of the sitcom "The Office" in a conference room.

"When times get tough and teams get lean, you can retract into silos," said Hanssen. The TV will provide "a short bite of time to recharge, connect with others, and laugh."

To gain calm and clear thinking, other business leaders are turning to mindful awareness, a widely adopted form of meditation that was pioneered by Jon Kabat-Zinn as a way to reduce stress and boost powers of attention. At the Center for Mindfulness in Medicine, Healthcare and Society that Kabat-Zinn founded at the University of Massachusetts Medical School, 150 corporate leaders have been trained in the practice since 2006.

"We are often so overloaded, doing more with less," says Janice Marturano, director of corporate leadership education at the center and a vice president at The program aims to cultivate "the mind's ability to be resilient."

Artreach director Becca Atkins, who graduated from the Mindful Leadership Program last summer, can't say she's completely Zen. She's short-staffed, sleep-deprived, and overworked. Yet she still uses the practices when she can, sometimes simply by taking a moment to sit still.

As for Rich Bolton, he's now feeling a bit stressed - over the high expectations for the next employee meeting, in April.

He said he joked to a colleague, "That went well, maybe too well. What's next?"

But for now, he's happy. "When employees want to come to the next meeting, that's a positive thing. They want to be engaged in what we're doing, and how we're leading the company forward in these poor economic times."

Correction: Because of a reporting error, the original version of this story gave the incorrect percentage of people who reported being unable to concentrate at work.