Thrifty instincts run through her family 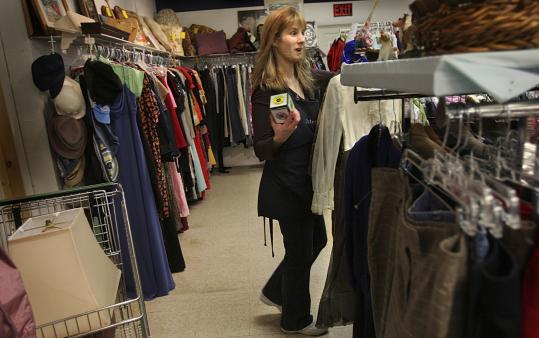 You'd never guess Rhonda Baker Michaud's husband makes more than $100,000 a year. After all, she admits to trash picking, and he wears shirts from the thrift store, as does their 17-month-old son.

But, says Michaud, it all makes for a better standard of living, as well as smart green thinking - reusing instead of sending things to the landfill. "I don't care if someone already wore something a few times; I'll just wash and bleach, dry, and put it on," says Michaud, who has seen discarded clothing with $300 price tags still attached.

Michaud is no amateur yard sale, flea market, and auction hunter; as co-owner of Sister Thrift in Watertown and Burlington, she's an expert in the resale field. While traditional retail shops are experiencing sales decline during the economic slowdown, Michaud says shoppers are still flowing through the doors - except now they're looking for suits and coats to wear for job interviews.

"One man's trash is another man's treasure," says Michaud. She and her sister, Tiffany LeBrun, spend their days sorting, pricing, and tagging "preowned" goods such as antiques, books, strollers, toys, purses, and shoes. "Our slogan is: 'If we don't get it, it doesn't exist.' "

The business is more for pleasure than profit. After paying rent, insurance, utilities, and keeping two trucks on the road, she says a typical thrift store owner can earn about $20,000 to $40,000. A portion of the store's profits benefits the MetroWest Humane Society.

The thrill of the hunt for bargains runs through Michaud's blood; she's been searching for that hard-to-find figurine or perfect side table since she was a child. She still has the collection of Steiff stuffed animals that she's been accumulating over the years.

"My grandfather ran a store called The Hodge Podge, and later sold things at the Jolly Jim Flea Market. My cousin John collected 'Occupied in Japan' figurines; my cousin Jerry loved military items such as uniforms and hats; and I did Steiff," says Michaud, who initially filled Sister Thrift with glassware and household items from her grandmother's basement.

What's the most common item that people donate to your thrift store? We get tons of George Foreman grills; half of them are brand new, still in the box. They actually sell well, though. We also have a lot of clear vases. Clothing is also big, although we don't get a lot of men's clothing, probably because men will wear their clothes until they disintegrate, while women will buy more clothes and then say, 'This is old fashioned' and give it away. People also donate lots of children's clothing, more than we can use; we have to bag it and put it in overstock.

What kind of bargains can you find? Generally items will sell for 25 percent of what you would pay in the store, if they are in good condition. We don't put out things that are stained or yucky, broken or chipped, or dishes in sets of three. You can find brand names, such as Ann Taylor, J. Crew, Ralph Lauren Polo. We see it all, even Prada and Louis Vuitton purses. A shirt is $4.99, jeans are $6.99 - just to give you an idea of the prices.

Will people buy almost anything? I'll get a piece of junk into the store, and think 'No one will ever want this.' But we let the shoppers decide, and inevitably, it is the first thing that sells that day.

What is the cheapest and the most expensive item in your store? The cheapest is 49 cents, which includes vases, toys, and stuffed animals; the most expensive are handmade wool rugs, ranging in price from $600 to $1,200. That might seem like a lot of money, but the original cost is thousands of dollars.

What tips would you give to people who want to find a good deal at a thrift store? You need to visit a lot, since it's hit or miss. Many of our customers are here every day, and they get the best bargains. You also need to look through everything very carefully or you'll miss a lot .

Do people inadvertently give away very valuable items? An eightysomething Watertown lady was cleaning out her friend's house and said I could come by and take whatever I wanted. 'It's all garbage,' she said, including an original World Series 1939 program, which turned out to be a collectible which sold for $400. And my grandmother once bought a cubic zirconia ring for 50 cents, except that when she got it checked out, it was real, and appraised at $6,000.

What's the best part of being a thrift store owner? If I rip my pants while working, I'll just go to the floor and buy a pair of jeans. I need sneakers now, so I'm hoping something comes in, in my size. I've become so frugal that I don't buy anything new, and we're living the good life because of that. We don't spend a lot of money, and we're not in a lot of debt.

Your store's name is Sister Thrift. Do you get any reaction to that name? A lot of people thought we were associated with the church. They thought we were nun sisters. And it's sometimes hard to get men in here; they think it's a women's thing. But it's the right name for us - we're sisters, and we're thrifty.