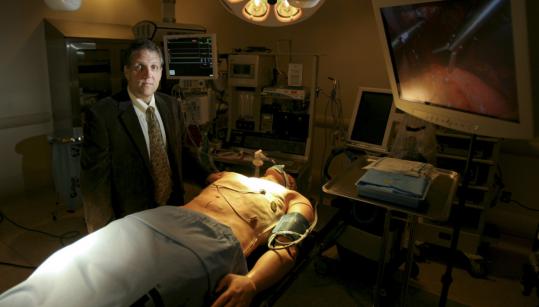 Today, Resuscitation Annie still exists but she has some high-tech cousins - state-of-the-art mannequins, or human patient simulators for whom the term "dummy" is not quite appropriate. These closely replicate the experience of operating on or treating patients, simulating not only the physiology (breathing, talking, drooling, and even bleeding), but also the behavior ("Help! I hurt").

Hospitals, including Brigham and Women's STRATUS Center for Medical Simulation, have set up special labs dedicated to training medical personnel using these computerized persons as futuristic arenas that often replace old-fashioned ways of instruction, which included practicing on cadavers or working with real patients.

"Walk into our operating room and it looks like you're walking into a real operating room, with the actual cabinets, beeping monitors, sterilized surgical equipment, even a scrub sink," says STRATUS medical director Dr. Charles Pozner, who is also an emergency room physician. "You forget you are in a simulated world."

Pozner works with a staff of simulation specialists who earn about $40,000 annually, and technicians and physician-instructors. They create scenarios that are so realistic that sometimes clinicians become so immersed they pat the screaming mannequins, trying to console them as they would a real patient. "That's when you know you've done a good job," Pozner says.

You've staged Code Blue alarms in the hospital corridors, using a SimMan. It's a cardiac arrest of a mannequin, but how do the doctors and nurses know if they succeeded or failed at their task?

These mannequins talk either with recorded voices or through a computer interface, so they can say, "Doctor, I'm having terrible chest pain" as the teams rush up. They have blood pressure, heart sounds, and blink, and an arm that's so realistic that you can put in rubber tubing and thread it into the vein and even get a flashback of blood as would happen with a real patient. If the mannequins "die," they lose their pulse and stop breathing, moving, talking, and blinking - even the pupils stop reacting.

The military has been very involved in the development of these mannequins, so because of that, they've been mostly male, right?

Yes, although now we have six different types, from newborn and toddler models to adults, including a pregnant one that can give birth to an infant. That one is a female, thank God. It would be kind of bizarre if it weren't. We've also even purchased wigs to make some of them more female in appearance.

How much do these mannequins cost?

What's the most unusual simulation that you've set up?

We created a hostage school shooting simulation here for the special tactics and operation team of the state police. We filled the room with smoke and loud noises and had bodies scattered on the ground. Some were supposed to be dead, and others severely injured. Participants had to quickly access and treat the patients. It was utter chaos.

Are there any limitations to the simulators?

We can't make them look ill in a graded, incremental way. For example, when a patient gets really sick, blue lights light up around the patient's lips. They're bright blue disco lights under the silicon skin, and instead of gradually turning on, they turn on suddenly. So there needs to be a more gradual and realistic physiological reaction to stresses.

And there are other types of simulators as well?

One of our rooms looks like a pinball arcade, but instead of pinball machines, there are various stations with various virtual reality stations. These are virtual reality simulators that allow you to do procedures with real-life instruments, but the actual mechanics are done with computer graphics.

What else is up for simulators?

I'm bringing simulators to the developing world. I'm talking to you from my car, and sitting right next to me now is an anesthesiologist from Kazakhstan who is here to develop the scenarios and curriculum to train physicians in her country on simulators. The same is true for India, United Arab Emirates, and various other places. Simulation is becoming a worldwide technology.

How did you get involved with medical simulation?

Before I went to medical school, I was a paramedic, and I worked with different airway trainers like CPR Annie and tried to make that whole experience as real as possible. When I became a physician, I continued to work on training others with simulation. Our center works with nurses, surgical technicians, physician assistants, administrators, and others, giving them a certain degree of psychomotor and critical thinking skills before they encounter an actual patient.

So you're an emergency room physician as well?

Well, sort of. Emergency rooms don't need physicians - they are just rooms. You don't call it an operating room physician, do you?