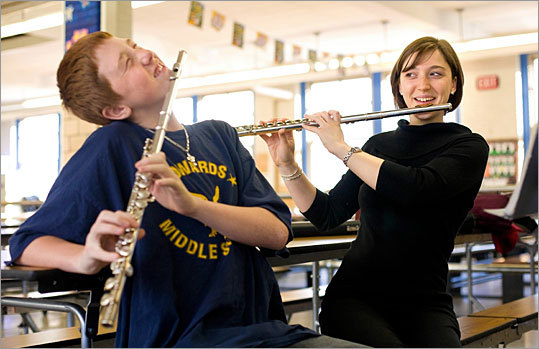 Corporate volunteering is getting a passport - and a new set of wings.

Taking the idea of company-backed "service" three steps and a time zone beyond blood drives and litter pick-ups, pioneering firms are sending employees on intensive, monthslong stints in developing markets around the globe to volunteer at schools, hospitals, start-ups, or even city councils.

The trendy new programs are costly, and so mostly still the work of a few big corporate names, including Ernst & Young, , Timberland, and .

But the benefits are so alluring that the idea is likely to spread in some form or another. Such programs not only bolster corporate reputations and do real good in the developing world, but also develop promising employees - giving them both a priceless lesson in global business and a sabbatical from the office.

What could be more crucial in today's business world? We talk diversity, yet so often avert our eyes to real difference. And we boast that we are global while so often clinging to English and Wheaties 5,000 miles from home. More than 60 percent of Americans ages 18 to 24 cannot find Iraq on a map, according to a 2006 survey by National Geographic.

"Outside the comfort zone" is a phrase you'll hear again and again from these new corporate do-gooders, and it's a notion we need to nurture in a global-knowledge economy.

In the capital of Montevideo, he was assigned to help a 12-year-old information technology company develop its first real five-year strategic plan. That meant doing a new kind of work, at a new firm, while coping with language and cultural differences. For a fast-paced American, even the traditional quarter-hour of chit-chat preceding meetings was a tough adjustment.

"I worked out of my comfort zone the entire time," recalls Leiter. Now, back home, he operates differently, trying first to get an overall sense of client needs before starting work. "Oftentimes, we have such a myopic focus, and it doesn't allow us to take a large view of the issue," says Leiter.

Through the program, Ernst & Young is both "doing its small part" to combat world poverty and helping itself, says Deborah K. Holmes, Americas director of corporate responsibility. "We need people with a global mindset, and what better way to develop a global mindset, and what more realistic way, than for somebody to have an immersion experience with just enough safety net?"

While sharing similar aims, each company's program differs. In three years, Ernst & Young has sent 20 top-performing employees to South America to help entrepreneurs. Pfizer, one of the first to set up such a program, has sent 155 global health fellows to 31 countries since 2003 to combat HIV-AIDS and other illnesses.

More informally, Timberland since 2003 has given two workers paid time off to work in orphanages in Peru and Africa, and six employees two weeks off to do ecological fieldwork with Earthwatch Institute in Kenya. Corporations commonly partner with nonprofit agencies for help in logistics and targeting assistance.

The experience changes more than workstyles. A 10-day visit to a Guatemalan orphanage last November by 19 mostly Cambridge-based employees of EF Education, a Swedish language and cultural exchange company, has created a lasting "sense of family" among participants, says Mark Soliman, a vice president who helped organize the trip.

The group holds monthly reunions, and upon spotting one another in EF's lobby on the Monday after they returned, many of the travelers erupted into a spontaneous group hug. While away, "you just see a side of goodness and warmth and big-heartedness and humility and love that's hard to see in a work setting," says Soliman. EF paid for twelve employees from various divisions to go, and seven others chose to pay up to $3,000 to participate.

Kristen Bahman, an office manager who paid her own way, said working at the orphanage opened her eyes to all that she has at home. "In your own little bubble, you take so much for granted," says Bahman, who also tutors middle schoolers in Charlestown. "You look around at everything you have, and think, 'How do I live with so much stuff?' "

So far, the programs have been fairly small in scale. But Big Blue is aiming characteristically high with a $6 million program to send 600 promising IBM employees to emerging economies worldwide over the next three years.

In July, a dozen teams totaling 100 employees will work with start-ups, entrepreneurs, and chambers of commerce in Romania, Turkey, Vietnam, the Philippines, Ghana, and Tanzania for a month, a stint book-ended by five months of prep and follow-up work.

Multinationals once had one way to develop global leaders: send a few mid-career executives on years-long stints to a mature market, says Stanley Litow, vice president of corporate citizenship at IBM. "But the world has changed."

That's why the first Corporate Service Corps participants have an average 10 years tenure at IBM, come from 33 countries themselves, and will head to emerging - not mature - markets in teams of eight. "The clear message is that people around the world need to understand global markets," says Litow.

Somebody is getting that message: About 5,500 employees applied for the first 100 spots - making it one of the most competitive employee programs in IBM history.

Maggie Jackson, author of "What's Happening to Home: Balancing Work, Life and Refuge in the Information Age," can be reached at maggie.jackson@att.net.