When Michael Locke is on the job, you might find the tall, neatly dressed Brit boarding a private jet at Logan to accompany his employers on holiday, tinkering with their house's wireless network, or taking their silver Boxster out for its once-a-week spin.

Those are just a few of the decidedly modern duties this 39-year-old butler performs, but when it comes to the topic of dinner, Locke sounds pretty old-school. "I get great satisfaction out of setting a great table," he says. "Proper linen, crystal, china, silverware, and candles; I use centerpieces, all types of things, all up to me. And when it looks good, it looks good."

Employed by a prominent Back Bay family he's bound by confidentiality not to name, Locke is a modern butler, one of a new breed of professionals running the houses of wealthy Americans.

Dispensing with the traditional coattails, Locke looks more like he's going to the office in his standard uniform: a wrinkle-free white dress shirt, striped Italian tie, and black trousers. Six feet two with a shaved head and a cheerful countenance, he has many of the same skills that the proper English butler of old had. He knows how to pack a suitcase, care for antiques, and serve afternoon tea. But Locke is more casual and likes to joke around with his employers. And his job includes informal tasks the stuffy English butler would never have done, like running over to Charles Street to pick up a pizza at Upper Crust.

"What we call a butler varies greatly," says Steven Ferry, chairman of the International Institute of Modern Butlers, who has written three books on the profession. "The American experience doesn't really extend to butlers that much, so they run the whole gamut from formal to completely informal, according to the employer's wishes."

There are no official statistics on the high-end domestic service industry, but Charles MacPherson, president of his own placement and consulting agency and former head of the International Guild of Professional Butlers, has declared a nationwide butler shortage.

"It is such an issue that our firm has decided to open a butler and household management school to help offset the lack of supply," he said. "There are more millionaires and billionaires in the world today, and though there is not a shortage, per se, of people to work in the homes, what's missing is qualified people."

Domestic staffing businesses around the country, including Cass and Company in Boston, report increased business. "We've gotten busier and busier in the Boston area," says Sara Cassinelli, the firm's owner.

One young professional admits he and his wife have had difficulty finding the right fit for their Beacon Hill household. They've been looking for someone to make those 50- and 60-hour workweeks easier, so they have more time for their two children. "We don't have a lot of time," says Erik Witkowski, who works in private equity and venture capital, "so we want that person to be the center of our universe, coordinating things, paying the bills, and doing special projects, like organizing photos or making sure we buy gifts for the children if they have a birthday party to go to, things like that. It's been tricky finding the right person, because they not only have to be functional, but also have the right personality."

Witkowski and his wife are willing to pay anywhere from $50,000 to $90,000 a year for a butler or household manager - the two titles are often interchangeable - who can keep their 5,000-square-foot town house running smoothly.

The salary they're offering is common. Generally, butlers/household managers earn an income ranging from $50,000 to $250,000 a year, says Ferry. And the job often comes with benefits such as a 401(k), transportation, room and board, and a clothing allowance.

"You really need an exec to run this sort of thing," says Ferry, "so you need to have managerial skills as well as a very good understanding and familiarity with high-quality houses, yachts, planes."

Butlers might be in demand, but they're different from the images of P.G. Wodehouse's Jeeves and the proper Mr. Stevens from Kazuo Ishiguro's "Remains of the Day."

"A modern butler has to be much more people-friendly," says Ferry. "That's not to say he shouldn't have standards; he certainly should. But you have to be open and perceptive, and you can't sneer when the boss does something that's not up to your standards."

While the English butler worked his way up through the ranks of a formal household, the American butler eases into the job from other fields. Some in the Boston area have worked previously as chefs, secretaries, retailers, or in human resources.

William Fritzer, now working as a butler in the Hamptons, trained for the job by pampering guests as a room service captain for 18 years at the Boston Marriott Copley Place. "We did big sit-down dinners in the presidential suites, and that's really where I learned my fine dining," he says.

Back in England, Locke grew up in public housing, worked as a cloth finisher in a textile mill, drove trucks, served in the Royal Navy, and was a police officer for 10 years. A few years ago, he married an American woman and moved to the United States.

He got interested in butling after watching a documentary about a bank cashier who went to Britain's Ivor Spencer butler school, then took charge of a 25-bedroom manor house in the English countryside. Locke decided to give it a try and attended the Professional Domestic Institute in Ohio, a 12-week butler's boot camp where he learned the ropes in an 18-room English Tudor home.

"I was starting a new life in America," says Locke, "and you've got to look at yourself and self-reflect as to what you're good at doing. And unfortunately, I'm good at cleaning, cooking, ironing. I like etiquette and having respect for everything, and I do things right. I thought I should become a butler."

Marta Cholfin, who works on Beacon Hill, started out as a private chef before going into household management. Cooking is in her blood, she says - her grandfather rode a chuckwagon and cooked for cowboys on the Western plains. She has taken care of everything from $75,000 carpets to rare antiques in second homes on private islands, and has catered for parties with hundreds of guests, including movie stars, royalty, and politicians, she says.

"I have a fabulous job," she says, "and through it I've done a lot of very exciting things I wouldn't have done on my own."

North Ender Erica Voigt recently made a career change from luxury retail management to household management. She didn't know that kind of work existed until she found the website of Cassinelli, the Boston-based domestic staffing pro, in a random Google search. After only a month of Internet job hunting, her open personality and good references netted six job offers in town and a substantial raise from her old salary. She works from 46 to 54 hours a week: full time in one household and part time in two others.

"I thrive in chaos and put people at ease," Voigt says. "People are looking for a break from the stuff of life that everyone gets caught up in, the stuff that can make you lose sight of what's really important, like spending time with your kids."

A butler who lands a good house can lead a good life. Locke started managing houses only two years ago. Today he has his own small basement apartment in his employer's building, a Lexus for his personal use, full benefits, a clothing allowance, and a salary of $65,000 a year. When his daughter comes to visit from England, he brings her to his employers' guesthouse on the coast (he wouldn't say where), or their ski lodge (ditto). Weeks of intense work are followed by breaks, and he says he has plenty of free time.

"I live two lives. I have a professional working life, and then I am who I am," says Locke of his new life in Boston. "But I know where I came from. I came from a government house in England." 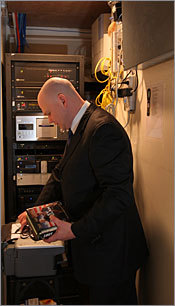