'On-ramping' not just for women anymore 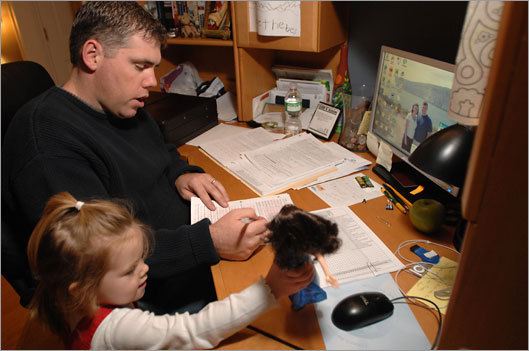 To date, "on-ramping" back to work after a stint at home largely has been a woman's pursuit. But now men are beginning to blaze the same trail.

And it's not easy. As more men pitch in with caregiving and even stay home for years to do so, there will be growing demand on their part for help in transitioning back to work. Yet the flurry of corporate and educational programs started to help on-rampers are almost all just for women.

It's a pity. Consider this: Do men fret about how to explain the resume gap in an interview, and do they question their own abilities after years out of the office? You bet they do, by some reports more than women.

Brooks Dougherty, a Riverside, Conn.-based investment manager, felt the self-questioning after stepping away from work for nearly five years. After quitting work in 2002 following a windfall, he stayed on as a full-time dad to his four children, then ages 5 to 15, when his ex-wife became ill, then further prolonged his absence from the workforce after his second wife got cancer.

"I derived a lot of my identity from my work, so the time off was hard for me," says Dougherty, who now has a fifth child, age 10 months, and works as a project-based financial consultant. "Being a man and being acculturated to the notion that the man is the provider, I did feel a little bit of insecurity gnawing away at me."

To jumpstart his return, Dougherty joined Dartmouth's debut "Back in Business" program in 2006 - likely the only co-ed on-ramping program at a major US business school. In its first two years, 10 men and 62 women have taken the Tuck business school's 12-week course, open to anyone with an MBA or equivalent work experience. On average, male participants have off-ramped for nine years, the women for seven.

And they took time off for different reasons. Half the men in the Tuck program had stepped away due to family health crises. The rest did so to reconnect with family or care for children, motives that inspire many women to quit work. "The reasons for men were a little more complex," says Anant Sundaram, a Tuck professor who co-directs the program.

It's hard to say how many men nationwide are on-ramping, yet their ranks are surely growing. Seventy percent of working dads with a preschooler had taken a paternity leave when surveyed in June, while just under half of those with a school-aged child had done so. The poll of job-seeking working dads was conducted by Monster.com.

As well, many more men are inquiring about Encore on-ramping program - again, a rarity in that it is co-ed - than just a year ago. The three-year-old program gives off-rampers in New York, London, Tokyo, and Hong Kong help returning to Lehman and other financial service firms. Thirty-two - or less than 10 percent - of the 370 program graduates have been men, says director of diversity Anne Erni, a champion of helping men on-ramp.

All these are signs that a fluid career is no longer women's work. The challenges and the rewards of such a life are being shared by men, as a peek at the message board of athomedad.com further attests. When a California dad asked last month about how to handle a two-year work gap on his resume, a host of responses suggested honesty - advice given by most career consultants.

"Be professional about it and say you decided to stay home. End of story," wrote one dad, adding that he had told interviewers that he learned important work skills, such as empathy and patience, from two years of full-time parenting.

Patience is often needed when any parent returns to work, says Kurt von Sneidern, a North Billerica father of two girls, ages 6 and 3, who is married to an accountant. The former owner of a house painting firm, he went into teaching last fall after three years at home. Now he feels ever-hurried and misses his extra time with his kids.

"It will get easier in future," says von Sneidern. "But it's a new dynamic. I try to make a point to make sure that every day they feel my love."

Is it too much to ask to have a society that values taking time off sometimes to care for others?

Maggie Jackson, author of What's Happening to Home: Balancing Work, Life and Refuge in the Information Age, can be reached at maggie.jackson@att.net.