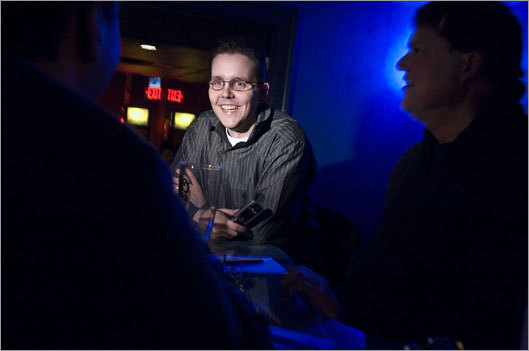 Bryan Person (center), chats during a meet up at Beantown Pub he arranged through his blog recently. Person is an avid user of several social networking tools including blogging and twittering. (Wiqan Ang Photo for The Boston Globe)
Email|Print| Text size – + By Penelope Trunk December 9, 2007

Networking for introverts just got a lot easier. You'd think that the people who are most afraid to talk to others would be the ones hiding behind the Internet. But in fact, with the rise of social media tools in the last five years, extroverts are going online to be their extroverted selves.

So finally, introverts can hang with extroverts without having to go to parties. On the Internet, introverts and extroverts are on a more even playing field. You have time to think before you answer, you don't have to look like a cheerleader or a football player, and if you feel like sitting in the dark under your blanket, no one will know, as long as your Web camera is not recording it.

The social network tools are actually varied ways that people can connect with each other online. Think of Match.com, for example. That is a way for people to present themselves to the public as a potential partner, and then find other people doing the same.

It is, in effect, a way to reach out to people who are interested in doing the same thing. And it doesn't matter if you're shy or introverted because you have time to figure out what to say to someone, and control over the pace and context of the conversation.

Here are some tools that go beyond Match.com and help you connect with people in terms of your career:

Blogs: A blog is like a home page you update three or four times a week. Or more. It is a list of the ideas you're thinking about. Some of the best blogs are like op-ed pages where you are the only writer. What blogs are not is quirky outlets for desperate and lonely teens. Blogging takes a big time commitment because organizing one's thoughts into cogent ideas, multiple times a week, takes a lot of time.

So most of the bloggers are doing it for their career, and blogging requires so much industry knowledge that most bloggers are midcareer. These are great people to network with because they can help you get what you want from your career.

And they're easy to network with because all you have to do is read their most recent ideas, and type out a comment about one of them. After a few comments, you will forge a connection with the blogger.

Twitter: Twitter is like instant messenger, only you never shut up. You can tell people what you're doing all day long. Small tidbits of your life condensed into even smaller sentences about where you are or what you're doing.

One of the hardest parts of building a network is the upkeep. Letting people know what you are doing so that they continue to feel connected with you even though you are not hanging out at bars together on the weekend.

The other nice thing about Twitter is that it is largely output. You don't have to listen. When introverts are overwhelmed, they shut down. Twitter makes it easy by not requiring a lot of listening - only reporting.

LinkedIn: This is like Match.com for people who want to get jobs instead of dates. The difference is that eventually, after a lot of dating, most people end up with "the one." This no longer happens with a job. You never stop job hunting, because you never stop changing jobs, so your career depends on networking more than ever.

LinkedIn is a way for you to list your resume, what you're doing with your career, and what you're interested in doing. You can connect this information to all of your friends' information on LinkedIn and ka-boom - you are not only connected to them, but also to their friends.

It's like you went to 40 networking events, made friends, exchanged cards, and entered them into a database.

Del.icio.us: What do you talk about if you are going to connect with people? That's still a problem. You can use social networking tools, and stay in touch with people who matter to you, but you still need to put something out there - give the conversation a little kick in the butt.

You could gossip, but that makes you look bad. And you could brag about your life, but the only thing more boring than that is complaining about your life. So instead, connect with ideas. Del.icio.us is a way to quickly categorize and store all the links you like in a way that your friends can access.

When you want to make conversation, the most important thing is to find common ground. Del.icio.us gives you a list of topics that might be common ground for you and others. If there isn't any, you can create some by clicking the links on the list and then reading: Now you have something to talk about.

Bryan Person uses all these. And he has a full-time job, and he has a new baby, and, presumably, a wife who does not let him get out of 3 a.m. feedings so he can be fresh to Twitter in the morning.

How does he make time for all this? He puts out information quickly, and scans quickly. Information is not so precious, and conversations are asynchronous and not so time consuming. Also, the wide range of tools means that Person is able to scale up when he has a lot to say and scale down when he's busy. "If I'm not always writing a blog post, I'm staying involved with Twittering," he says.

Person echoes what many people have said about online communication, which is that it's the grease that oils the gears of in-person communication. And this is why young workers today are better at connecting and interacting face-to-face than many of their older counterparts. "Social media would not be nearly as satisfying if people could not be face-to-face as well," Person says. In fact, Person used Twitter to get a gathering of friends. This would only work because such a wide range of people are using these tools to find real connections that come face-to-face.

In the end, social media is a tool for extroverts, but with a little bit of gumption, and a lot of extra time, the introverts can successfully jump on board.