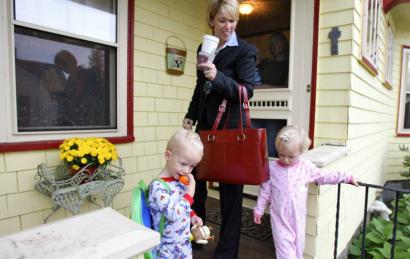 Choate Hall & Stewart associate Kathy Henry had a common work/life problem: Her nanny called in sick and she has an urgent conference call. The solution? She rides up the sleek elevators to her office at Two International Place, approaches the glass company doors and hands 2-year-old Jack over to her boss, John Nadas. He's a high-powered insurance litigator, co-managing partner of the 200-lawyer, top-tier law firm, based in Boston. Nadas won't mind if Jack drools all over his starched white shirt, right?

This scenario is captured on YouTube-style video that Choate made to broadcast the family-friendly image it cultivates among employees. Henry's video has already registered more than 4,000 hits on the firm's website. Other day-in-the-life clips include one entitled "Law Firms, Too, Can Be Like a Box of Chocolates, " a silent vintage black-and-white film that depicts a couple sampling chocolates, ending with a title card: "Taste life at Choate. Sweet by any measure."

"Law firms typically don't come to mind when people think of creative, out-of-the box websites and marketing," said Nadas, who escaped the filming of the video with nary a food stain on his dark pants. "We wanted to break that mold."

Indeed, among the silly footage featured on its website is a feature, "The Horrible Boss," in which a slapstick comedian jumps around and pulls his hair and screams, while intermittent title cards flash by, reading, "The boss you fear, you won't find here" and "The coast is clear."

In a series of 15 videos, summer and young associates sit in a red leather chair and talk - not about law - but singing in a Swedish folk trio; watching Jack Nicholson in "The Shining"; and scoring in hockey.

"I think it's a very edgy marketing tool," said Henry, who wrote the "Family Friendly" skit while on maternity leave. "It humanizes the firm and if you're interviewing with Choate. You can see clips that give you an idea of who people are outside of their attorney role."

Henry's role outside of being an attorney is as mother of twins, Jack and Katherine, and a 7-month-old, Seamus Finn. She's already daydreaming about a sequel to her first video. This one, she said, would be called, "My Day Off," and show her during a typical frantic day, juggling two sick kids, a dog, a conference call, dinner, a party, a sleeping baby, and a tired husband. "I think I can take that one on the road," said Henry.