THIS STORY HAS BEEN FORMATTED FOR EASY PRINTING
ADVERTISING SUPPLEMENT

Marketing to gay and lesbian consumers

More companies court a population that votes with its pocketbook 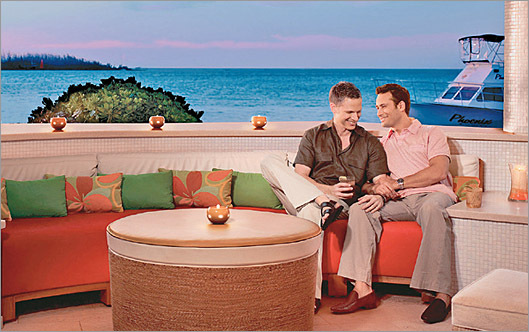 Research confirms that honest portrayals of gays and lesbians in advertising are the most effective way to address this audience. This new ad for Hyatt Resorts appears in national gay magazines including Out, Out Traveler, and The Advocate.
Email|Print|Single Page| Text size – + March 30, 2008

The provocative ad featured soccer star David Beckham clad in nothing but low-slung black briefs. Its appearance in The Advocate, a national gay news magazine with a 72-percent-male readership, was hardly surprising.

But thumb through the rest of the magazine and you'll also see ads for American Airlines, BMW, Xerox, and 200-plus other mainstream companies striving to tap the formidable LGBT (lesbian, gay, bisexual, and transgendered) market. And why not? With purchasing power estimated at $641 billion in the U.S., according to the 2006 Gay Press Report, over 183 Fortune 500 brands were active in the gay consumer market as of 2006, up from 150 in 2004.

"Companies often come to us when decide they want to reach this market and develop strategies for advertising and communications," says Howard Buford, president and CEO of Prime Access, a national advertising firm that specializes in reaching diverse audiences and, with Rivendell Media Inc., co-sponsors the annual Gay Press Report.

"They may be hearing from their sales force that there's a high level of usage of their product by gays and lesbians. Generally, they have had some kind of 'aha!' moment when they contact us." The "aha!" may stem from social conscience, but often it springs from a more capitalistic awakening. While gays and lesbians make up only about 7 percent of the population, or about 15 million Americans, they represent a financially elite slice of society. Todd Evans, president of Rivendell Media, a New Jersey-based company representing gay and lesbian print media, says, "Companies target this market to reach people with higher discretionary income. It matters less what your income level is than how free you are to spend it."

Scott Seed is director of resort marketing for Hyatt Hotels and Resorts, one of the first hotel chains to market directly to gays and lesbians, in the late 1990s. The company has won kudos from the

LGBT community for depicting same-sex couples in its communications and for emphasizing companywide diversity. "This is a $65 billion travel market that we want to be a part of, especially leisure travel," says Seed, who notes that gays and lesbians take more trips than their straight counterparts and spend more when they're at their destinations. But how to get them there? By running mainstream ads in gay outlets, or by creating specific gay and lesbian content for these media, say Evans and Buford. Most companies choose the former, hitting national publications like The Advocate, Curve, Out, and Out Traveler; Logo, a gay TV network; and TV programs with gay content, like "The L Word."

But LGBT-specific content scores the most direct hits, as 18 years of focus groups have shown. "LGBT consumers are very consistent in what they say, which is they want to see communication that reflects who they are and how they live," says Buford. "That's regardless of geography and gender and across ethnic and racial identity." So when Hyatt Resorts developed a 2006 campaign for gay readers, it depicted two men embracing under a Maui waterfall. "It was one of the most intimate portrayals of this segment ever done in LGBT marketing," says Seed, a Prime Access client.

Has there been any backlash? Not at all. Buford believes homophobic boycotts are on the wane: "They haven't been successful, and at this point there are so many companies in the LGBT market that it's hard to find one that isn't. It becomes cognitively as well as practically untenable [to mount a protest]." Lisa Mason, operations director at Bonner and Associates, a Washington, D.C., consulting firm, is a 39-year-old lesbian who gets 90 percent of her information from mainstream media. But Mason patronizes advertisers in the 10 percent gay-specific outlets she reads.

"My partner and I call it 'supporting the supporters,'" she says. "For big-ticket purchases we take that into consideration." Mason and her partner bought a Volvo in part for that reason and because they learned that Volvo trains dealers how to treat same-sex couples.

For Paul Davis Jones, a gay, Philadelphia-based artist and strategic-philanthropy consultant, corporations need to "walk the talk" in any medium. In the mid-1990s he consulted with a financial services division of American Express to help it enter the gay market. "I was careful to see that they were hiring gay employees, working with gay people in the community, developing service packages for gay and lesbian people," says Jones, who is 68. "They arrived at a sensitivity that made their product more credible to gay and lesbian consumers. If you're an advertiser coming to this market now, you have to be concerned about your credibility."