Swank, but seafood is the hook 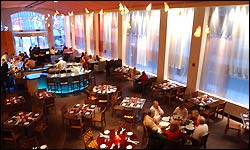 For much of 2002 Hotel Commonwealth in Kenmore Square was swathed like a giant birthday present. When it was unveiled late last year, controversy erupted over its plastic looks, quieted only when a $4 million makeover was promised.

Meanwhile, Great Bay restaurant, attached to the hotel but independently owned by Michael Schlow and Christopher Myers, has generated only the mildest of buzz, in stark contrast to immediate fame of their first two restaurants, Radius and Via Matta.

What gives? Was the late spring opening leading into the summer doldrums a reason? Is it the location, in that Wild West maze of surging traffic, student life, and baseball fans? Or are we all still trying to digest the last round of openings, including Via Matta in Park Square?

Or is it simply that some restaurants take time to be discovered? Great Bay is certainly ambitious, with its ever-changing and complex menu that takes some time to comprehend -- dishes from the island raw bar, the market selection, local favorites. You almost need a road map. The service is eager and well managed, casual but solicitous. (This proved to be true on a first visit when I wasn't recognized as on later ones when I was.) And all the other pieces match, especially a wide-ranging wine list with enough to choose from in wines by the glass.

Modern-cool might describe the ambience. The vaulted burnt orange ceiling, the tie-dyed hangings in the smaller dining room, and the gold branching light fixtures remind me of the new Terminal E at Logan. But other smaller elements are richly detailed and clever -- from the sea motifs on the frosted window in the front and reflected light on the back window to the surface of the island in the middle, underlighted so that it seems as if light is flooding through a blue ocean surface.

Seafood is the focus, and that's the reason to go there. Chef Jeremy Sewall, who spent years at the Lark Creek Inn north of San Francisco, has a California view. He says finding the best quality and the most local product is the goal, meaning a menu that changes daily depending on what's available. That, and letting the flavor of the seafood come through with the least amount of manipulation.

We have all heard this mantra before, of course. But in the case of Great Bay, the truth is in the tasting. When the philosophy works just right, the result is brilliant. A whole Mediterranean sea bass, first seared so that the skin is crackly-crisp but with no taste or weight of frying and then roasted, is served over sugar snap peas, shreds of ginger, and shiitake mushrooms. The fish bursts with flavor, and the vegetables add a backdrop of freshness without interfering.

Line-caught swordfish captures another high point, gaining back all that ground lost by tasting versions overcooked or pre-frozen. This is substantial but still gentle on the palate, a meaty fish carefully sauced and handled so that a sea taste still shines through a mild white wine sauce studded with boletus mushrooms.

In other dishes, this simplicity can seem a little repetitive. One evening, we order Rhode Island fluke, almost never seen on menus outside a sushi bar. It comes lightly breaded with a subtle, almost hollandaise-like sauce. The delicacy of the fish and its freshness are indisputable. But another of crisp skate wing, served lightly breaded and off the bone, might as well have been the same mildly flavored fish.

Actually some of the more gussied-up preparations are at least as captivating. Fat shrimp glisten with a barbecue glaze spicy enough to cause your eyes to widen, and the white grits under them absorb all the extra sauce. The carrot vinaigrette in an appetizer of chilled seafood salad has a piquant punch, enlivening scallops, shrimp, and rings of squid without overwhelming the shellfish.

Some of the offerings from the island, or raw bar, make a play for star status. My favorite is a halibut taco with a spicy guacamole, slices of papaya and a sprinkling of pickled onions, a lighter and punchier version than most fish tacos. However, octopus ceviche is a very close second, the mollusk tender, the gazpacho water spicy with the hint of chilies.

One evening, we order oyster po' boys -- tiny brioche buns piled with oysters and a spicy mayonnaise; they're so good, we are compelled to call for another round the second we finish them. They're much better than the fried oyster appetizer we ordered later with a dot of mustard aoili atop each little oyster.

Not that everything at Great Bay needs chili power to be good. A white corn soup is smooth and ethereal, the essence of summer punctuated with a crisp-edged shrimp. English pea soup from an earlier menu had the same qualities of gentle flavor. However, clam chowder tastes almost like a sauce, not floury but thick in texture, overshadowing the clams.

Chef Sewall also creates several entrancing desserts, well beyond the creme brulee and molten chocolate cake circuit. Butterscotch pudding in a tall glass is delicious, just sweet enough without being cloying. A buttery biscuit shows off strawberries to their advantage. The best, though, is one that might not at first seem the most promising: Ice milk with cookies. Slushy and barely sweet, the ice milk is irresistible, especially when sips are alternated with crunchy bites of chocolate chip or toffee cookies. Only the fact that the evening is late keeps us from ordering seconds of that, too.

But that dessert and the excellence of many of the fish dishes will entice me back, if only to see how quickly this sleeper in Kenmore Square catches on.