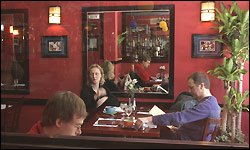 The new Montien in Cambridge's Inman Square looks too high-concept at first glance, at least for its neighborhood. Regal red walls, large mirrors, and mahogany trim seem dressy for the strip of Cambridge Street where East Coast Grill has held court for many years. But then you settle into a table, look around, and notice that the lipstick-red color is giving all the diners a certain glow. Then a waiter arrives, ever so polite, and you try to remember the last time someone tableside was this nice.

Montien is family owned, an offshoot of the first Montien on Stuart Street in Boston. The first one is owned by Sasirat Wyckoff and Piam Suktheva, sister and sister-in-law, respectively, of Panja Salanotayan, who joined them in this venture. Salanotayan is also an owner of Spice Thai in Harvard Square and Bangkok Express in Faneuil Hall. Suktheva's husband, Tony, is the chef of both Montiens.

One of the things the chef is adamant about is offering a terrific pad Thai. "If people like it," Salanotayan tells me on the phone, "they try something else." Both insist that this dish is beautifully made. And it is. Pad Thai ($6.95 and $7.95) boasts creamy noodles and just enough of a delectable sour quality to make you want to keep eating more.

Another standout is "pik khing," spicy green beans with a variety of chicken and meats ($6.95 and $7.95). The heat is gentle; the dark sauce a warm mixture of ginger, lemon grass, and lime leaves. Pad karie ($6.95 and $7.95), which we order with beef on one visit, is also pleasing: a Thai curried stew without coconut milk but with lots of onions and chunks of potato. Salanotayan explains later that in Thailand this homey dish would be made with an egg dropped in at the last minute. Stirred quickly so it scrambles, the sauce has an egg-drop soup texture. "It doesn't look good," he says, so the chef omits the egg.

Like many Thai menus, there are other concessions to American tastes. A gingery sauce traditionally served with a whole steamed fish is presented instead with salmon. Fillets of fish are steamed first, then grilled ($14.95); the sweet salmon is lighter than usual, the soy and ginger sauce deeply aromatic. And then there's that gracious service, on display every time a dish comes to the table. Water glasses are replenished quickly, empty beer bottles whisked away.

What falls short at Montien are the appetizers. Lady Dancing ($6.95), grilled shrimp on skewers, arrives at room temperature. The light broth in a vegetable tofu soup ($3.95) is soothing, but the vegetables are al dente. Flat patties of ground shrimp tod mon ($6.95) should be hotter. But tiny "golden cups" ($6.95), crisp tartlets filled with ground chicken, are delightful little morsels.

Heading out after one visit, we stop to watch a Jackie Chan movie playing on the restaurant's TV. When the bartender notices, he writes the name "Ong-Bak" on a napkin. Ong-Bak is Thailand's stunt-actor, says the bartender, and if we like Chan, we'll love Ong-Bak.