It's hip, it's diverse, it's in Dorchester 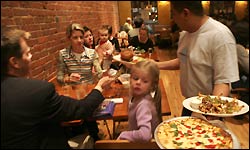 The story of Ashmont Grill, the new shining star in a gritty part of the city, reads like a made-for-TV movie. Chris Douglass, the respected chef-owner of Icarus, the upscale South End restaurant, decides to open a place in the Dorchester neighborhood where he's lived for almost 20 years. The idea creates such excitement that the city and his neighbors -- even the seller of the property where Douglass wants to locate his new venture -- all pony up funding. The rebuilding of the space, which previously housed a restaurant, takes months, and as the work progresses Dorchester residents and others inquire about the opening date again and again.

And when Ashmont Grill finally opens, the rush of customers is so heavy that plans to serve breakfast, lunch, and dinner daily have to be scaled back to concentrate on dinner and weekend brunch.

So what's it like, this Cinderella story of a restaurant? And most importantly, how's the food?

Ashmont Grill is both chic, with its striking colors of reds and slate blue and its sleek, streamlined interior design, and very welcoming -- there's no sense of the hipper-than-thou attitude so often encountered in restaurants these days, from the trendiest of city restaurants to high-flying suburban spots. On a recent Friday evening visit to Ashmont Grill, we're greeted by three young women, who explain that the wait might be a while. Their smiling faces, as well as the comfortable bar area, make up for the fact that the place doesn't take reservations. It helps that the people-watching is fabulous with an ethnic mix. Around us sit white-haired couples chatting with friends, a toddler sharing a pizza with two mommies, young families with school-age children, guys drinking beer and cheering as a baseball game plays on television, and young hipsters sipping white wine. It's a slice of diversity you don't see very often in Boston restaurants, and it makes you want to cheer out loud.

The feeling of bonhomie carries over for the relatively short time it takes to get a table, and smooths over the sometimes awkward service: mssing silver, scrambled delivery of plates, napkins astray. But the waitstaff is cheerful and eager to help.

Ashmont's prices are amazingly low considering the quality of the food, and Douglass, in a phone interview later, makes it clear that he's intent on keeping them down. Chef Bill Flum8erfelt, who has cooked at Icarus, Elements, and Biba, among other places, creates simple, straightforward dishes, many of them American classics. He uses River Rock naturally raised beef; there's aged balsamic in the dressing on a steak; and the pizzas are not only large, but come perched on attractive wire rack pedestals. There's no danger of puzzling over this menu, wondering what sort of food group you might be about to ingest. The wine list, too, is reasonably priced, and the mostly California and New World choices are familiar. A long list of craft beers is a nice touch, and is also reasonably priced.

A Caesar salad combines good, crisp Romaine with a tangy dressing and shavings of Parmesan. Chunky cod cakes, really more like balls, come with a spicy remoulade. The pizzas, which seem to adorn every other table, are popular for a reason. We share one topped with baby spinach, a good sprinkling of garlic, red onions, olives, and cherry tomatoes. The crust is crackly, the toppings are generous but not gloppy, and the result is fine eating. Sometimes dishes are a little too plain. On two tastings, a special salad with beets and crumbled goat cheese seemed to have missed a dressing, and another salad of arugula, tabbouleh, cucumbers, and tomatoes had the same minimalist vinaigrette.

The board of daily specials is a good place to start when you're trying to figure out what to order. One evening, a special of mako shark -- a generous portion of moist fish with just the right gilding of white wine sauce -- is the reward. Another night, it's a sweet, rich, and thick mound of apple bread pudding.

Flumerfelt has an especially appealing way with several meat dishes. A pulled pork sandwich looks a little homely at first on its Kaiser roll, but the slightly sweet, slightly hot sauce on the pork makes it succulent. Grilled flatiron steak is ordered medium and arrives pinker than that, which is a boon (to me anyway). It has a great, meaty flavor and just an edge of sweet-bitter interest from the drizzle of balsamic on it. Rotisserie pork loin shows off the same virtues and is delectably tender. With an accompaniment of applesauce and a side order of baked beans, the composition is the quintessential autumn meal.

That's not to say there aren't disappointments. A special white bean soup is thin and lacks flavor. Vegetarian Thai red curry has plenty of vegetables, tofu, and an overabundance of coconut, but needs another boost of heat or other flavoring. Lemon layer cake one evening is dry, the only dud among several dessert offerings. A flourless chocolate torte and a brown butter blueberry tart are both sweet and rich, and offer pleasing endings to a meal. But the brownie sundae, an extravaganza of ice cream, caramel and chocolate sauces, real whipped cream, and a crumbly brownie, captures the clean-plate prize.

Ashmont Grill may still have a few rough edges and loose ends, but Douglass's foray into underserved Dorchester proves that fairy-tale stories can produce restaurant experiences worth savoring.