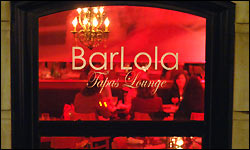 Cuisines have their moments, and right now in Boston, Spanish -- Spanish tapas, specifically -- seems to be the current darling.

As with many culinary fads, the interest in these morsels or two-bite-sized dishes has seemingly progressed backward. First, chefs began calling any small plate or appetizer "tapas," whether the cuisine was New American, French, or Asian fusion. Diners got used to the concept, and then became interested in trying the real thing, the authentic bar snacks of Spain designed to entice drinkers to linger. The phenomenon hasn't reached the level of the sushi explosion, but at least suggesting a meal of sharing tapas won't result in blank stares from your dining companions.

BarLola, which opened in the downstairs location in the old Hotel Vendome building, is the newest local exponent of the tapas boom. In addition to tapas, the place features a mostly Spanish wine list, as well as some extravagantly named cocktails.

On a warm evening in mid-September, BarLola's greenery-framed patio is almost filled. According to one of my young companions, BarLola had been featured that morning in Daily Candy, a fashion and culture website, and the tables are atwitter with young women sipping Spanish wines and sharing bites of garlicky shrimp or beef empanadas. The wait staff seems a little overwhelmed by the crowd, and we wait for menus, then our drink orders, and for what seems like an awfully long time for our tapas.

x When the plates finally arrive, it's in a rush so that our table, as well as of those around us, are covered with small plates of food, with diners making room for one more plate or jockeying for tastes of a favorite dish before their companions finish it off. (In the interest of full disclosure, I am recognized by one of the owners, and that seems to speed the service up, or at least means we're not ignored as the waitress tries to handle multiple tables.)

BarLola serves only tapas, a little odd for such a large restaurant -- in addition to the patio, there are several airy, high-ceilinged dining rooms inside totaling 145 seats, and a large bar area with seating as well. BarLola's tapas are rather plain examples of the genre; there's no crossover frill to these plates. But under chefs Angel Suarez and Luzdary Osorio, they are quite authentic, and as we discuss at our table, close to what would be served at a casual place in Spain.

An "olive salad" consists of many good, salty, briny olives. A cold Spanish omelet of potato, eggs, and onions is a solid wedge of just those ingredients, satisfying but stodgy. Manchego cheese and Serrano ham draped over toast would have been more enjoyable had the ham been of better quality. Since there's really nothing to it, the dish suffers unless the ingredients are of the highest quality. But a seafood and vegetable salad has a bright, vinegary sauce that shows off tender squid, mussels, and chunks of scallops.

Tapas calientes, or hot tapas, take up most of the menu, and are more elaborate. Maybe because the dishes are all delivered at once, or maybe because of how the kitchen operates, the hot versions are mostly lukewarm, unfortunately, and fail to present much of a contrast to the cold items. There are a few rewards, however. Scallops, crisply battered, are doused in a tomato and goat cheese sauce with a vivid piquancy that contrasts nicely with the shellfish. Tender squid stuffed with crabmeat and shrimp make for appealing bites. It's necessary to negotiate around tiny bones in a dish of rabbit, but the payoff is succulent meat in a winey sauce. Mussels stuffed with ham are served in a romesco sauce, that rusty red concoction of tomatoes and a judicious amount of hot pepper and garlic, all tempered with bread crumbs and ground almonds. It's a good combination, the meaty, sweet flesh of the mussels bolstered by the thick sauce.

Braised lamb arrives in a savory, garlic-scented sauce; the ubiquitous garlicky shrimp, on any and every tapas menu, offer the hoped-for jolt. Finely chopped beef seasoned with raisins and spices makes a lively stuffing for empanadas, but the turnover crust needs to be more crisp and a lot less bready. Two meat tapas -- one of beef tenderloin and one of pork -- suffer most from the tepidness of their sauces. Both are rich, the beef in a blue cheese sauce, the sliced pork loin in a rather sweet prune-brandy cream sauce. And in both cases, though the meat is fine, the slightly thick, creamy sauces congeal as they sit.

Several of the desserts, including the cheese tart and a bread pudding with mango sauce, share those too-heavy qualities. But milk caramel crepes break the mold, light in texture and just sweet enough, with a lick of tanginess from the caramel.

One of the best features of BarLola is the prices. Both the wine list and the tapas at BarLola are reasonably priced, and the portions, while certainly not dinner-sized, are generous enough so that four or so shared tapas can easily feed two. For the casual and spur-of-the-moment way many of us eat now, that price structure can be quite attractive. Now that we've learned to love tapas, BarLola's advantages -- price, authenticity, and an appealing setting -- outweigh the missteps.