Two sushi presentations, with a twist 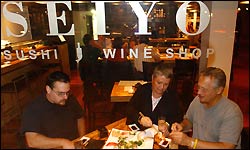 Not long ago, sushi seemed among the most exotic categories of dining, something only a few adventurous souls indulged in, and then only rarely. After all, raw fish and American palates didn't sound like much of a match. These days, grabbing a few maki rolls at the corner shop or sitting down to share a party boat is as common as going out for pizza.

And as sushi has proliferated, so have the crossover purveyors. Two of the latest versions, Seiyo in the South End and the Foundation Lounge in Kenmore Square, combine drinking (or at least buying alcoholic beverages) and dining in unusual ways.

Seiyo, down on the newly chic Mass. Ave. end of Washington Street, is the quirkier of the two. A boutique retail wine shop on one side segues into a sushi bar on the other -- the logo is a wine bottle with a fishtail ending. Walking into Seiyo is a little disconcerting. The entrance into the rather dimly lit store features racks of wines and a clerk sitting motionless behind a counter. The wines, although certainly not all expensive, are not the fare at your local liquor store, and a fleeting fear of seeming deficient in wine knowledge sweeps through your mind. But to the left is the dining section of the place, complete with high stools and polished wood tables, and here everything is familiar.

Seiyo is owned by Stephen Yung, who started out in the wine business and decided the neighborhood needed sushi, as well. The menu concentrates on what might be called mainline sushi at very reasonable prices, considering what you can spend these days on tiny slivers of fish. Seiyo, the wine shop, offers tastings several nights a week, though the sushi bar is still awaiting a liquor license, a disconnect that adds to the place's quirkiness.

Sushi chef Haru Chen, who previously worked at Fugakyu, among other places, puts out appealing, well-made maki rolls and sushi, but doesn't venture past the tried and true. Each time we ask about fatty tuna, or toro, we're told it's not available. One evening, as an alternative to toro, the waitress suggests a maki roll of hamachi with scallions, but it's not really comparable, since the hamachi, or yellowtail, is fresh but too bland against the scallions. On the other hand, a simple sheath of hamachi over sushi rice better shows off the clean, fresh taste of the fish. A unagi maki, or grilled eel, captures the flavor of the eel while adding a spicy kick.

Mayonnaise is pervasive. Crisp greens and beautiful slices of avocado and tomato distinguish a salad, but the memory is of the mayonnaise dressing. The fat slices of crab salad maki also are heavy on the mayo. And a Seiyo special maki features a bevy of ingredients -- radish sprouts, crunchy shrimp tempura, and cucumber -- all wrapped in salmon and tuna slathered with a spicy mayonnaise dressing.

That makes a donburi bowl seem special. We choose hamachi again and are rewarded with sparklingly fresh cuts of fish over rice. Sweetened sheets of egg line the bowl, and a nest of finely shredded daikon adds a spritz of texture and taste. The dish is soothing and distinctively clean against the palate -- what you might imagine eating often, with just a mouthful of mayo-rich maki now and then for contrast.

Over in Kenmore Square, the Foundation Lounge, subterranean and sleek, sports a zensai, or snack, menu of highly stylized sushi. Compared to some of Seiyo's offerings, the zensai at the Foundation Lounge ripple against the tongue with such vivid flavors that they linger in the mind long after you've savored them. Kenichi Iwaoka, an owner of Osushi, is the consulting chef, with Jackie Wu doing the actual dishes. The lounge really has no kitchen, explains co-owner George Wright Jr., but the owners wanted food that matched the luxe surroundings -- in other words, something other than Buffalo wings. Though there are only 11 items on the menu, Wright says about every other customer orders food.

No wonder, I think, recalling tiny shrimp dumplings marching down the center of a platter, each one a plump, steamed shrimp wrapped in delicate folds of noodle. A maguro spring roll holds chunks of tuna, cucumber, lettuce, and a surprise of mango rolled in thin rice paper. A very spicy Korean chili sauce is offered for dipping, but it's hardly necessary, and only muddles the fresh tastes of the roll. Proving too much really is just about right, tuna and tobiko caviar are mixed with chili sauce and then piled on top of a spicy tuna roll. It's spice on spice, rich on rich, explosions of flavor that roll over the palate in short bursts. Kenny's California maki provides new dimensions to that warhorse of grocery counter sushi. A sprightly horseradish sauce and very fresh crab, avocado, cucumber, and crunchy Romaine make the rolls irresistible.

Two of the best choices veer sharply from the expected. Tartare of salmon, its rosy flesh chopped into brightly flavored pearls, is mounded on the platter, garnished with capers and onions, and served with thin rice crackers so small that they hold only a bite or two of the fish. Best of all are nuggets of Kobe beef threaded onto skewers and served over salad greens. Each little chunk holds a full, fine taste of beef, and is even better dunked in a ponzu sauce. Lately, chefs have been doing all sorts of sometimes torturous things to Kobe in appetizers, like shaving the beef so thin that it completely loses its flavor, but the Foundation's treatment may be the perfect way to enjoy this delicacy: It's simple, it tastes like Kobe, and it stands up to a strongly accented sauce. Cocktails may be the focus at this lounge, but the zensai are what I'll return for.