All things to all diners 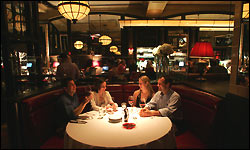 Eastern Standard, the two-month-old restaurant in the Hotel Commonwealth, is the elephant in the room of the Boston restaurant scene right now. Not just because it's very large, but because there's no way that other restaurateurs can help but think to themselves, "Is this the template for success?"

It's big, it's beautiful, and it's open for breakfast, lunch, and dinner. It's reasonably priced, its menu encompasses dishes like offal (really pates and terrine rather than anything risky, a la the old Biba) and veal schnitzel to grilled cheese sandwiches and cheeseburgers. Its wine list is interesting, and the bartenders busily concoct cocktail classics from decades ago. The legion of hostesses welcome patrons with unflagging smiles -- and courtesy prevails, down to bringing a glass of water to a customer waiting for companions.

Eastern Standard, which seems to be continuously busy -- and I didn't even dare venture into Kenmore Square on a Red Sox game day -- is all these things. And yet, in a city that used to harbor eccentric places at both ends of the dining spectrum, from inexpensive to high-end, this new splash of a restaurant is more than a little generic.

For one thing, the design by Peter Niemitz -- complete with beautiful details such as tile floors, a long marble bar backed by mirrors, lots of dark wood and leather, and golden-hued light fixtures hanging like big chrysanthemums down the center of the room -- gives Eastern Standard a bold brasserie look. But the restaurant also resembles many other places in the Boston area done by the same architect. The menu, too, comprises about what one would expect, such as salmon, two cuts of steak, mussels with thin fries, braised lamb shank, chocolate mousse. And for a restaurant that opened in the summer, the menu is resolutely set for cooler weather.

Owner Garrett Harker and general manager Gwen Butler watch carefully over the place; I managed to escape being recognized only once over several visits by Harker, who I had interviewed previously. Jamie Bissonnette, who had been at Tremont 647 and Pigalle, is the chef at Eastern Standard, which has more than 180 seats, including the patio, and is open for much of the day and night. As well as the hostesses at the front, there is an unusually large waitstaff and very efficient service, except for one evening on the terrace where our waitress seemed overwhelmed.

Despite its bustle, the first impression at Eastern Standard is one of comfort. Walking into its slightly dim expanse from the superheated street, one can't help but feel immediately soothed by all those greetings at the front, along with the spacious seating, lighting that's just right, and menu script that's legible and understandable.

One evening we nibble on a complimentary pickled cucumber salad as we decide what to eat, choosing to share a big bowl of mussels in a cider-laced, slightly creamy broth. The mussels are briny and plump, and sliced fennel in the broth adds crunch. Sharp mustard is offered with crisp, thin fries, and along with a salad of roasted beets, it could be a whole meal.

But then we'd miss the veal schnitznel, a fine job of cooking that results in tender veal inside a very crisp crust. Plenty of capers and pepper, along with the piquancy of artichokes, round out the dish. Or a frisee salad with crispy sweetbreads scattered in among the greens and a soft-poached egg on top.

The other dishes point up chef Bissonnette's strengths in assertive flavors. Roasted king salmon under mustard crust juxtaposes two strong tastes and makes the combination delicious, and buttermilk mashed potatoes underneath provide a pillowy contrast. Braised lamb shank shows off fork-tender meat, and though it's a little heavy for the season, the flavor compensates. One evening, we hope for the paella special, only to learn it's sold out; grey sole with tomatoes and vinegary potatoes makes a delightful and more appropriately summery substitute.

Some dishes, however, seem drab. A hanger steak with frites is perfectly fine but rather bland, especially since on one visit the frites are rather limp. A steak tartare is nicely chopped and has a good tomato jam, but the meat lacks a depth of flavor. Other choices are good but overly heavy, better to taste when winter winds are whipping down Comm Ave., such as baked rigatoni with a tomato cream sauce and crumbled lamb sausage. That's also true of a hefty pork chop with a creamy mustard sauce and braised cabbage, which has such a smoky aftertaste that it overwhelms the meat.

Desserts aren't a strong point at Eastern Standard. Chocolate mousse in an almond tuile is certainly dense and sweet, but not memorable, and the tuile is unfortunately sticky and limp. A fruit tart would be fine if the pastry cream hadn't been overcooked and stiff. The best, a little incongruously for a brasserie, is a pretty Boston cream pie, Frenchified with a genoise standing in for the more American two-egg yellow cake, and accompanied by very good pastry cream and a shiny chocolate topping.

In a phone conversation, Harker suggests the aim is not to be an authentic French brasserie, or to amaze diners with the food or the experience, but rather to appeal to a wide swath of visitors. There are a few kinks to be worked out, mostly in the food, but as a restaurant for all, Eastern Standard looks to be well on its way.