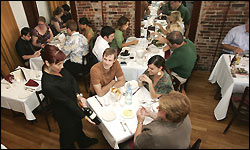 When you eat in the North End, you expect Italian: Italo-American red sauce, Northern Italian, even innovations on an Italian theme. What you don't expect is an Italian menu infused with South American ingredients.

Latin America has invaded the cocktail scene -- think mojitos, caipirinhas, and pisco sours. In New York, Miami, and elsewhere, there are many South American places as well as intriguing crossovers of Brazilian-French and pan-Latin-Japanese. But chefs here have been tentative about incorporating Latin tastes into their food.

Luckily, there's Taranta. Jose Duarte, chef/owner, started out serving Southern Italian cuisine, then began using ingredients from his native Peru to feed his cooks before the restaurant opened for the evening. Later a few ingredients such as rocoto peppers crept into Italian dishes on the menu. When those met with success, Duarte became bolder, and the result a few years later is an intriguing melding of the exotic and more familiar Italian.

Taranta certainly looks like an Italian restaurant, cozy in the winter with red drapes contrasting with exposed brick and stone-tiled floors. In warm weather the windows looking out onto Hanover Street are opened, making it feel even more like Italy. It's a homey sort of place, with the cooks working in the open kitchen, extended family groups sharing wine and food, and the waitress telling us that the owner and his family are visiting his brother-in-law, the well-known chef Mario Nocera, who has moved back to Italy to open a restaurant.

One evening, we start with an antipasto selection, which includes several types of olives, mozzarella, marinated tomatoes and artichokes, and salamis. With some crusty bread, it's a great beginning, well-composed and very Italian. But we add to that an appetizer called calzoncini fritti, a takeoff on calzones. They're really flaky-crusted mini empanadas; one is filled with salt cod, another with spicy chopped beef, and another with mozzarella and leeks. Served in a clay flowerpot, they're irresistibly crisp and warm.

There are some Southern Italian classics in the pasta section of the menu, such as pasta with a San Marzano tomato sauce and fusilli baked in parchment with onions, pancetta, and roasted tomatoes. One evening close to Thanksgiving, the special pasta is ravioli stuffed with squash and tossed with cheese and chestnuts, round and satisfying on the tongue.

The more intriguing selections, though, mix it up. Soft pillows of ravioli are filled with ricotta and then sauced with an intense pesto. You can taste the garlic and the pignoli nuts, but the fleeting herbal flavor isn't basil but rather something with an earthier sweetness. That, I realize, checking the menu later, is Peruvian black mint, a type of wild marigold. Cassava-root gnocchi sound as though they might be heavy, but aren't, and the green lamb ragu they're in is such a heady experience of tangy, herbal flavor that it lingers in memory. Duarte explains in a phone conversation later that the lamb is marinated in a fermented corn cider before being braised with lots of cilantro and garlic.

Duarte says he and his chef de cuisine, Laura Henry, play with ideas all the time to fuse Peruvian and Italian ingredients and concepts, sometimes taking months to create a dish. One such dish stands out: a double pork chop with a glaze of sugar cane and rocoto, a spicy red Peruvian pepper. The sweet-hot taste brings out the pork's deep flavor. A saute of big Peruvian white-corn kernels, spinach, and caramelized onions accompanies the pork, along with appealing crispy-edged yucca patties, something like another version of corn arepas. The South American way with beans, corn, and potatoes shows up in several dishes. Grilled trout brushed with saffron-infused butter is a perfectly nice fish, but I almost ignore it in favor of more of the giant white lima beans (called pallares) and Peruvian yellow potatoes.

Thick slices of very rare tuna are spread over a chunky salsa of roasted sweet peppers, leeks, capers, and more of the spicy rocoto peppers -- an appealing, if more conventional, treatment despite a very long menu title invoking both Peru and Italy's Calabria region. Filet mignon with an espresso crust is more unusual, surprising the palate with its slightly bitter edge that marries well with the meat and the sweet-sharp sauce of a Peruvian carob syrup and Italian vincotto (grapes cooked into a syrup-like liquor). Like other meat and fish dishes, this one gets an offsetting bite from sauteed greens, this time escarole. On an earlier menu, a corn cake soaked up the juices from a beautifully roasted chicken; the latest rendition substitutes risotto and a saute of wild mushrooms and panca chilis from Peru.

There are inconsistencies at times at Taranta, mostly in atmospherics and service. When the windows are open, the place can be balmy even on an October night. But the temperature near the windows on a cold evening can range from blasting heat one minute to downright chilly the next. One Sunday evening, our waiter vacillates between being very attentive and disappearing for long stretches. When he finally pops up, long after we've finished, he doesn't ask about coffee or dessert, and I assume that, like many other restaurants in the North End, Taranta doesn't serve them; besides, we've grown impatient, so we move across the street to a cafe for espresso and cappuccinos. On my next visit, however, the waitress is solicitous, helpful, and quick, and she brings the dessert list without prompting. A semifreddo of nougat and crunchy praline, sort of an ice cream without being whipped, is dense and sweet, with an added bite of powdered espresso on top. Chocolate mousse cake is a tiny mound but so intense that a bite or two is sufficient.

Nothing on the dessert menu looks Peruvian, though Duarte talks of ice cream, made from lucuma fruit, which he describes as tasting almost like cinnamon-laced pumpkin. Although he continues to look for new sources of Peruvian ingredients, sometimes, as in the case of lucuma, they can be hard to find in this area. But uncertainty has its advantages. Seeing what Duarte and his chef come up with next is part of the fun of trying Taranta's unusual juxtaposition of Italy and Peru.

Comments: Like most of the North End, this place is stylish but casual.