What Hyundai needs to sell the 2011 Equus

Plus: Wheel falls off Volvo wagon 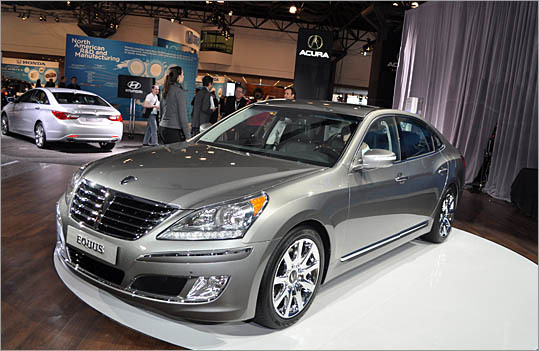 Q. Is it true that Hyundai is coming out with a luxury car that is bigger and more expensive than the Genesis? I remember the original $4,995 Hyundai. Do you think the company is losing track of its roots?

A. Hyundai is in fact coming out with a new model called the Equus. From the early press information, this is a car that is going head-to-head with the likes of the BMW 7 Series, Audi A8 and Lexus LS. This new rear-wheel-drive sedan will be powered by a V-8 engine, with all the luxury car creature comforts that luxury buyers look for. For many years Hyundai was hampered with a reputation of building disposable cars that lost their value quickly. Adding luxury cars to its lineup could certainly change that reputation.

Two things Hyundai needs to watch. One is overall quality. As we have seen from Toyota and other manufacturers in an effort to build sales, quality slips. The second is the overall dealership experience. A bad sales or service experience is a surefire way to hurt a vehicle’s image.

Q. On two separate occasions (a few months apart), I brought my 2003 Volvo V70 wagon to my local mechanic for service.  Both times I inquired about a clunking noise from the front of the car.  The first time I was told it might be an engine mount wearing down, but it was “too early” to replace it. The second time I was told it had something to do with the suspension.  In both cases I was not told the problem had to be fixed.

A few weeks later, the tire literally fell off the car.  Fortunately, no one was hurt.  The culprit was a ball joint, but there was much more damage to the car than simply replacing a ball joint.  The kicker (of course), is the car was due for an inspection the following month and I’m almost certain this would have been diagnosed at that time. My question has to do with fault/negligence.  Given I inquired twice about the problem, is my mechanic at fault in any way?

A. On the surface you would certainly think the shop is at fault, but I have seen cases that are not completely black and white. If the ball joint was worn sufficiently that the “ball” was literally bound up in the “socket,” the worn part could have been overlooked. That said, I still think the shop has a moral obligation to assist in the repair of your car.

Q. I have just purchased a 2002 Subaru Forester with 106,000 miles on it that has had regular oil changes for the last 40,000 miles with Mobil 1 synthetic oil. I have never been a strong believer that the synthetics are that much better than conventional oil. Can, or should I, switch back to conventional oil?

A. Synthetic oil offers superior lubrication and slightly longer intervals between oil changes, although you should never exceed the manufacturer’s recommendation. If you do a little math you may find that changing the oil every 7,500 miles or seven months as recommended by Subaru is actually cost-effective as compared to conventional oil changes with a standard recommendation of 3,000 miles or three months. That said, you certainly can switch back to synthetic oil without any problems.

Q. I am in the market for a station wagon and I am considering a Subaru Outback. I looked at an Outback seven or so years ago and thought the interior was cheap looking and the car was slightly underpowered and ended up with a Passat wagon. Now the Passat is showing its age and becoming unreliable. What do you think of the new Outback?

A. The Subaru Outback has grown and matured over the years. The last Outback I drove was powered by a six-cylinder engine that provided power to spare and still returned 22 miles per gallon. Gone is the utilitarian Subaru interiors of old. This new Subaru was downright luxurious. Of course the price tag reflected luxury as well. The Outback that I drove had a suggested retail price of just over $32,000.