Look away from the Pontiac G3

Plus: Genesis Coupe is value, but not above list price 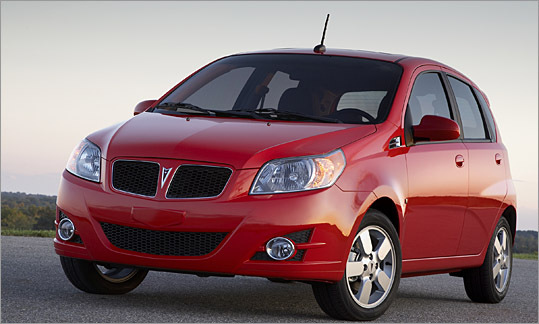 Q. I'm in the market for a new car and commute from Natick to Boston. The other day I saw a sporty little car and the only name I could make out was G3. What is it?

A. The G3 is a new small car made by Pontiac. The car itself is a Korean import based on the same platform as the Chevy Aveo. I have not driven the G3, but if it is the same as the Aveo, there are, in my opinion, better choices. Gas mileage is pretty good, the crash tests are five star, but the handling is weak and the overall performance is lacking. My other concern is unless General Motors changes its decision, Pontiac will be gone at the end of 2010. Although I'm sure other GM dealers will honor the Pontiac warranty, it is possible some parts may be difficult to find. And unless the G3 becomes a collector's item, the re-sale/trade-in value may suffer.

The V-6 makes the Genesis just a little nose heavy, but I enjoyed the performance of the 306 horsepower and nearly equal amounts of torque. The standard suspension also made the Genesis much more comfortable to drive. Keep in mind the Genesis is a rear-wheel drive sports car and could be a challenge in winter without snow tires. All-in-all the Genesis Coupe delivers plenty of value with equal amount of fun.

Regarding dealers who mark up popular cars over list price, I suppose it is the law of supply and demand. The hot new Nissan GT-R has been selling for $20,000 to $40,000 over the retail price. Several years ago I met a dealer who had a ZR1 Corvette for sale. This was back in the days when they were selling $20,000 over list price. Rather than make a quick profit, he sold the car at list and had a drawing to pick the winner. He felt that this tactic helped build traffic into his showroom. He also liked the idea that the car was sold to a local customer, rather than someone from possibly out of state that, in his words, belongs to the "more money than brains club."

Q. I was following my wife as she was driving her 2007 Camry down the highway last week heading to Maine. When she first got on the highway, there must have been a gallon of water that came out of the tailpipe. Is this serious?

A. When an internal combustion engine burns a gallon of gasoline it makes nearly a gallon of water. Generally this water gets so hot it disappears as steam vapor. If your wife's car is driven primarily short distances, the water collects in the muffler. When she accelerated out on the highway the collected water was forced from the exhaust system. This is completely normal and also explains why muffler systems rust from the inside out.

Q. I have a 2002 Hyundai Elantra that has a crankshaft seal leak. The mechanic is suspicious that the engine has a problem. As of right now he is saying that I might be looking at as much as $2,000 to fix the oil leak. Give you give me some advice?

A. There have been problems with the thrust bearing wearing on the 2.0 liter four- cylinder engines in some Hyundai models. When these bearings wear or in some cases fall out altogether, the crankshaft "walks" in the engine block and causes the crankshaft seal to leak. To replace the bearings is a big job, taking nearly 13 hours.

Q. My check engine light came on and I had a diagnostic check and nothing was wrong. Since then the light comes on once every two weeks. What should I do?

A. If the check engine light comes on, there is a problem of some kind. When the light is on, go back to the repair shop and have them check the car for a trouble/fault code. This code will lead the technician to the proper repair.