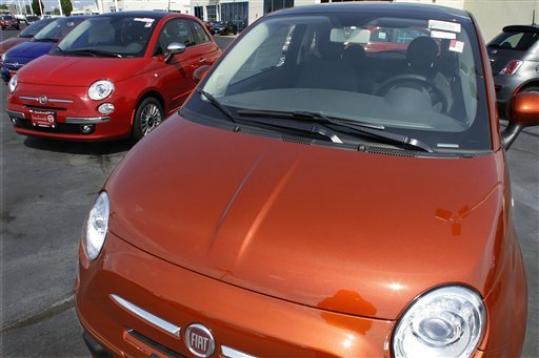 Demand for full-size pickups jumped 16 percent in August, helping to make it the strongest sales month since August 2009. Overall auto sales increased 20 percent from a year earlier to nearly 1.3 million, according to Autodata corp.

The rising demand shows that businesses need to replace aging trucks and feel more confident about the recovery in U.S. housing -- an industry where pickups are essential for hauling equipment and crews.

"Businesses don't usually go buy a fleet of trucks unless they have good reason to believe that business will be ramping up," said Jesse Toprak, vice president of market intelligence for the TrueCar.com auto pricing service

In pickups, Ford's F-Series, the top-selling vehicle in America, saw a 19 percent sales increase, as did Chrysler's Ram pickup. Sales of General Motors' Chevy Silverado rose 4 percent, while the GMC Sierra was up 9 percent. struggling big truck, the Tundra, posted a huge increase of 68 percent.

Pent-up demand is part of the reason for last month's truck increase. The average vehicle on U.S. roads is nearing 11 years old, and some are simply wearing out.

But automakers and industry analysts say the economic recovery -- new housing in particular -- is also starting to make buyers feel more comfortable about a big-ticket purchase.

There's a direct correlation between the housing market and pickup sales, they say. When people who work in housing or other construction are more confident, they tend to invest in equipment. Some may be adding crews and need vehicles to get them to and from job sites.

Housing has been in the dumps since the 2008 financial meltdown. But recently there have been some good signs. U.S. new home sales rose 3.6 percent in July to match a two-year high reached in May. In the past 12 months, sales have jumped 25 percent. But new-home sales remain well below the annual pace that economists consider healthy.

Truck sales fell dramatically in 2008 and 2009 as gas prices spiked and the housing industry collapsed. Since then, they've never fully recovered.

Gas mileage also is playing a role in the pickup increase. Newer models are lighter than older ones and can be equipped with small but powerful V-6 engines. A business owner can cut costs dramatically by replacing a 10-year-old pickup, said Jeff Schuster, senior vice president of forecasting for LMC Automotive, an industry consulting firm.

Jeff Jira, 32, of Pewaukee, Wis., had no intention of buying a new truck when he went to his local Ram dealer to get his 2007 pickup serviced in late August.

But the deal on a 2012 Ram crew cab, with zero percent financing for six years, was too good to pass up. Plus the old Ram needed repairs costing $750.

Jira, an electronic technician who's married with two children, said he's feeling much better about the economy and the security of his job, so he decided to buy the first new vehicle of his life.

The dealer cut his monthly payment by $10 to $388, giving him a dependable car to haul his family and tow his boat to a nearby lake, Jira said.

Normally, strong truck sales don't happen until the last three months of the year due to marketing promotions and customers wanting four-wheel-drive vehicles as winter approaches, Schuster said. So the August surge bodes well for the industry.

Toprak expects truck sales to grow faster than the rest of the U.S. car market for the remainder of the year.

Truck sales also are good for automakers' profits, especially the Detroit Three. The companies make $5,000 or more on pickup sales, compared with $1,000 to $2,000 for an average car, Schuster said.

The strong sales in August can't be attributed to deals. Discounts on the F-150 and Ram pickups fell compared with last year, while they rose only 5 percent on Chevy's Silverado, to $4,787. The F-150 incentives are the lowest since 2007, when Ford offered an average of $3,598 per truck, according to the Edmunds.com website.

In overall sales, Toyota, and led the way with big increases. Toyota sales rose 46 percent, while Honda's climbed 60 percent. VW kept its stunning growth going with an increase of 63 percent. Both Honda and Toyota reported jumps because last year's numbers were depressed when an earthquake in Japan hobbled their factories and caused vehicle shortages.

Gas prices, which rose more than 20 cents a gallon during the month to an average of $3.82, drove people into smaller cars. The Chevrolet Cruze notched almost 26,000 in sales, making it the top-selling compact in America. Sales of Toyota's Corolla, and Ford's Focus surged, and Honda Civic sales more than doubled.

Buyers also were drawn out by exciting new models such as the midsize Altima and the Dodge Dart subcompact, Schuster said.

August auto sales, when calculated at an annual rate, are far stronger than last year's 12.8 million. But they're far short of the recent peak of 17 million in 2005.