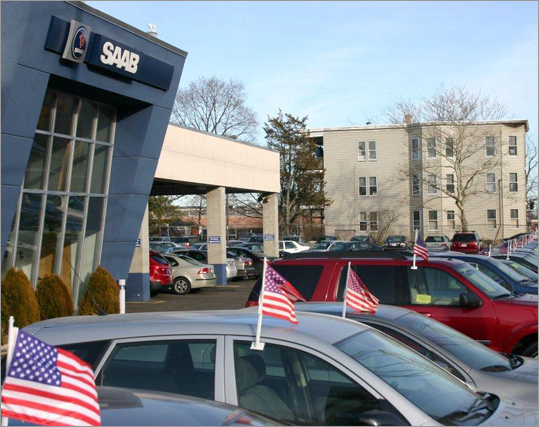 Often, when a business shuts down, the owners tape an “Out of Business—Thanks for Your Patronage” note to the door as they lock it for the final time.

The folks at Charles River Saab in Watertown are going about it the opposite way: They’re holding a farewell open house on Saturday from 5-8 p.m. as the oldest Saab retailer in the Western Hemisphere shuts down after 55 years.

“We’re opening the doors for all the old employees, plus some customers, to stop by and say goodbye to the joint,” says service manager Pierre Belperron, who will be staying on site for a few weeks to close down operations at the Arsenal street facility.

Meanwhile the staff will be moving the service and parts operation about a mile down the road to Boston Volvo at 75 North Beacon Street, Brighton, another of the Village Automotive Group’s dealerships.

“We’ll continue to do service and parts work as long as there are Saabs on the road,” says Belperron.

Saab has been shut down and in bankruptcy since December and efforts to reorganize the company have been stymied because General Motors still owns many product licenses.

When the company ceased production, Charles River Saab had 70 vehicles in stock.

“Most were sold within 30 days and the rest within 60,” says Belperron. “Sadly, it was one of the biggest sales months in our history. A lot of buyers liked the fire sale prices even though the cars came without a factory warranty.”

Belperron says mechanical parts won’t be a long-term problem for those new Saabs; however, it may be a while before the company or aftermarket suppliers can offer body parts.

“Even if the company returns, prospects are that it would be three or four years before any new product comes to market,” says Belperron, the go-to person for Boston-area Saabphiles since 1989.

“We’re expecting about 100 folks to stop by,” he says, “including Felix Bosshard, the original owner of CRS.”