THIS STORY HAS BEEN FORMATTED FOR EASY PRINTING
Who Taught YOU to Drive? 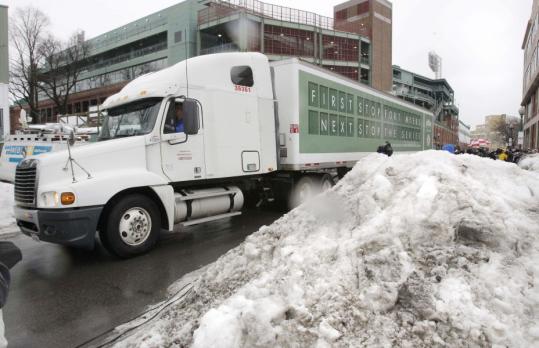 Monster snowbanks that block your line of vision to oncoming traffic. Ice flying off big rigs and landing on your windshield. Mounds of sidewalk snow spilling into your parking spot. The list of driving-related snow woes this season goes on.

“The town does its best to get all the snowbanks down, but you can’t get all of them down,’’ said Donna McKenna of Hopkinton. “I’ve noticed people flashing their headlights when coming out of a side street to let people on the main street know they’re there, particularly at night. I just thought that was a great idea.’’

With all the snow we’ve had this winter, it’s easy to feel as if we’ve seen it all. But as McKenna points out, even with a dozen storms under our serpentine belts, there’s more to learn.

Take giant snowbanks. If you hit another car because your view was blocked by a snowbank, will your insurance rates go up?

Most cities require you to park within a foot of the curb, but does that rule still apply during this crazy winter, where curbs are buried thigh-high in snow?

Is a truck driver — or any driver — required to scrape off rooftop snow? If your car gets hit by a snowy projectile that blows off another vehicle, are you responsible for the damage?

This column was supposed to have been about running out of gas, but these days, snow takes precedence.

Can’t see The story was just a few paragraphs long. “Two injured after crash in Hopkinton; snowbank to blame,’’ read the MetroWest Daily News headline. But what got my attention was that police didn’t cite the driver who caused the accident, apparently because the offending snowbank would have blocked a giraffe’s view.

“We use our judgment in a lot of cases,’’ Hopkinton Police Chief Richard Flannery told me. “If it’s a situation where our officers don’t think a clear violation has occurred, they’ll document the individual’s statement and let the chips fall where they may with the insurance company.’’

So will the unnamed driver who caused the accident be hit with a surcharge? You bet he will, insurance experts said.

In Massachusetts, insurance companies must abide by the state’s Standards of Fault list when assessing accident claims. The list, which appears in the Code of Massachusetts Regulations, cites types of accidents in which a driver is automatically surcharged, regardless of mitigating circumstances. For example, if you rear-end someone or hit a parked car, you’re automatically found at fault. Hitting another car while emerging from a driveway or side street also triggers an automatic surcharge.

The Standards of Fault don’t allow leeway for accidents influenced by bad weather, nor will you find any mention of snowbanks or icy roads in the law, said McKenna, who is also a spokeswoman for the Massachusetts Association of Insurance Agents.

Even if your insurance company wanted to pay your entire claim, legally, it can’t, she said.

“Insurance companies can’t just say, ‘Well, it was snowy, so we won’t charge you,’ ’’ McKenna said. “They have to find fault based on the standards.’’

The good news is you can appeal, and if bad weather or snow led to your accident, you have an excellent chance of winning. “I don’t know anybody who appealed a weather-related accident who didn’t have the surcharge overturned,’’ she said.

To prepare for an appeal, McKenna advised, take a photo of the snowbank, preferably with a person or a car next to it to add perspective. Copy the day’s weather report, and obtain a copy of the accident report. “And put together all of your thoughts as soon as possible, as it may be hard to recall them by the time you have your hearing,’’ she said.

Expect to wait months for your hearing, and know going in that even if you win, the state’s $50 appeal fee is nonrefundable.

Rule’s a rule The knock on my front door was loud and determined, just what you’d expect from a Somerville police officer.

“You need to move your car,’’ he said politely. “If a firetruck comes down the street, he won’t be able to make the swing.’’

As driving is my business, I know that when parking on the street, I’m supposed to leave a width of 10 to 12 feet for a firetruck to pass. I felt I’d done that, but there was an issue: Because of a snowbank spilling into the street, I was parked several feet from the curb.

Under normal circumstances, you’re never supposed to park more than a foot from the curb. But the snow bank — which I didn’t put there — would have taken days to shovel out. Given that every other parking spot within a three-block radius of my home was taken, was I seriously expected to obey the 1-foot rule?

“Just because there is snow, that doesn’t change the parking regulations,’’ said Michael Meehan, Somerville director of communications. “We understand it’s difficult in some areas, and we’re not going around with a ruler handing you a ticket if you’re over a foot away from the curb . . . but people still have to get down these streets.’’

My guess is the policy applies no matter where you live. Boston parking officials said they’ve ticketed more than 200 drivers $35 each for parking too far from the curb this winter. The cars blocked road access to emergency vehicles and plow trucks, they said.

I moved my car, but Kevin Robinson, president of the Fire Chiefs Association of Massachusetts, told me he had yet to hear of an instance this winter where a firetruck couldn’t fit down a street to respond to a call.

Nevertheless, he urged drivers to remember most firetrucks are 10 feet wide, including mirrors, so you should leave at least 12 feet to let one pass, even if your community, like Boston, technically requires just 10 feet of access.

“If you’re only giving us 10 feet we’re really going to be slowed in our response,’’ Robinson said. “Most engine trucks are 28 to 30 feet long, so on corners we need even more room.’’

Peter DeMarco lives in Somerville and plows in Malden. He can be reached at demarco@globe.com. He also updates a Facebook page, “WhotaughtYOUtodrive?’’