The crusade against cars

In this green age, automobile lovers are under siege. But demonizing people for enjoying a little luxury is a tough road to navigate. 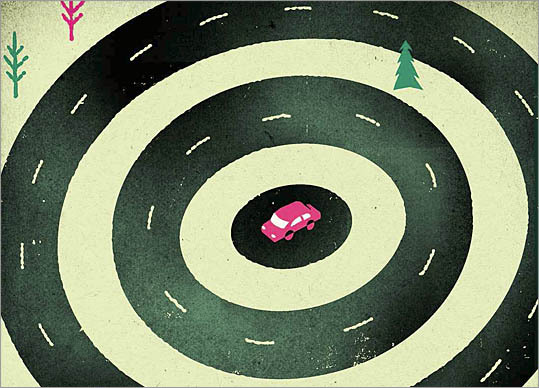 As an automotive writer, I’m always driving a new car, even in the confines of Boston.

In between the Versas and Volkswagens, that means commanding powerful machinery: luxury sedans with more than 380 horsepower, convertibles shoehorned with massive V-8s and rude exhausts, and even a supercharged 2½-ton Range Rover painted in metallic grape soda. Save for weekend trips with my girlfriend and her golden retriever, I drive alone, most times without any destination. Did you know a Ferrari California will go through an entire tank of high-test in less than 24 hours? Or that there are two ways to start the 11-mile-per-gallon Mercedes SL63?

I ought to be fined. Perhaps we should all be limited to 100 horsepower and 14-inch tires, lest everyone start driving for pleasure’s sake. That would be irresponsible.

“Social responsibility” is the media topic du jour, the latest feel-good narcissism of those leading government, corporations, and other big-mouth organizations. Part of the idea is to give an appearance of top-down restraint – that it’s not OK for the CEO to upgrade his Gulfstream V while downsizing his company. In the auto world, social responsibility comes with good intentions – tougher federal fuel economy mandates, tighter emission controls – but for car lovers like me, it’s a sucker punch in the face.

While the debate over who or what is warming the earth is far from won, cars – among many carbon indulgences in the Western world – have already been declared the losers, the major agitators of an environmental apocalypse. The polar ice caps are melting, our winters are colder because the planet is getting hotter, and I’m supposed to feel bad about it all because I’m getting a back massage in a 17-foot-long Mercedes. Turn up the air conditioning.

No joke. Not even Audi’s “Green Police” ads, which mocked environmentalist angst by setting up a roadblock for gas-guzzling cars, is that far from reality. Last month, the Environmental Protection Agency announced that by the 2012 model year it wants to endorse every new car with letter grades, as they do in the United Kingdom, where tailpipe emissions are taxed. You can’t even finish a car review without reading about a dashboard’s eco-friendly plastic.

In January, engineer Dave Pericak was apologetic explaining the 2011 Mustang GT’s engine to The New York Times, saying the V-8 “is not irresponsible,” since it’s rated at 25 miles per gallon. Until now, you see, muscle cars have been as hazardous to the public as packs of Marlboros.

Fat drivers might be even worse for the planet. Two studies using data from the Centers for Disease Control say America’s increasing obesity rate has caused fuel consumption to rise. And if you want to drive a big car to haul that huge rear, a Cambridge research group suggests we slap EPA mileage numbers on the bumper of every new vehicle, prison-style, so we can openly shame you.

There’s no doubt the twist of another key causes more pollution. I’m all for reasonable government action to safeguard our basic health and protect natural resources. And I’m glad to see green think tanks and progressive blogs and municipalities praise Detroit’s renewed interest in smaller, “responsible” cars. But their countless studies and proposals demonizing automotive travel – It’s why we have crowded suburbs! It kills people! Charge drivers by the mile! – don’t try to engage debate. They read like manifestoes.

So how far does social responsibility stretch? Limit the number of methane-spewing kids a couple can have, so there won’t be more Kate Gosselins to pollute? Limit bathroom breaks to save water? No one’s sure how to abate our existence, but vilifying drivers for enjoying what they can afford isn’t the answer.

Soon, I’ll leave work in another Range Rover. Then I’m going to rev the engine at red lights, idle in traffic, and fold down the seats so I can haul my bicycle to the repair shop.

That’s the only vehicle I own.

Clifford Atiyeh is the editor of Boston.com's automotive section. E-mail him at catiyeh@globe.com.