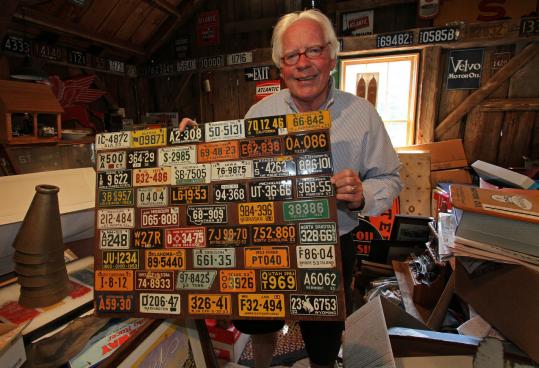 Bob English holds a 50-state (plus D.C.) collection of license plates thate were once given away in cereal boxes. (Barry Chin/Globe Staff)
By Matt Carroll Globe Staff / September 16, 2010

When state Registry of Motor Vehicles officials last month held their annual lottery to award low-number license plates, 70-year-old twins stood quietly in the audience, hoping, like everyone else, to win a coveted plate with three or four digits.

But the twins are a little different than most other participants — they already have extensive collections of low-number plates.

Bob English, a retired Boston school psychologist who lives in Marshfield, and Ed English, a retired Newton city clerk living in Roslindale, have been avid license-plate collectors since they were youngsters. They’ve collected hundreds through the decades. Bob, the more ambitious collector, also expanded into other types of “automobilia’’, old signs, and anything else that caught his fancy.

“It’s a fun hobby, and the people we meet are nice people,’’ said Bob, who collects with his wife, Crystal. He even bought his house in Marshfield because it had a large barn in which to store his extensive collection.

Both men have — or had — two-digit plates. Bob still has his. Ed had his two-digit for years until he apparently forgot to reregister it and lost it.

“It’s always been a hobby and an avocation and fascination,’’ said Ed, who has no idea how many plates he has.

Both brothers are longtime and early members of the Automobile License Plate Collectors Association.

Bob also has a three-digit and three four-digit plates, which have gone to his three children. Some plates came from governors to whom he made appeals as a hobbyist, he said. He also has antique plate “A’’ and antique “2.’’ (He asked that his current car registration numbers not be re vealed, for privacy reasons.)

This year’s lottery by the Registry was held at the Larz Anderson Auto Museum in Brookline, which exhibits some of Bob’s collection. More than 8,500 people applied for 177 low plates, including R12, 2002, and 55A. About 40 people south of Boston won plates — but the English brothers were not lucky this year.

License plates distributed via lottery, like all specialty plates, cost $40, plus $50 registration for two years, according to Ann Dufresne, spokeswoman for the Registry of Motor Vehicles. Regular plates are $50 every two years. If the fee is not paid on a plate, it goes back to the RMV for a year, and then is reissued.

Specialty plates can be transferred between immediate relatives or to someone with a “significant personal relationship’’ without going back to the lottery.

Bob and Ed English’s interest stems from their childhood growing up in West Roxbury, where a neighbor was often visited by vehicles with low-number license plates. The plates intrigued the preteen boys. The low numbers hinted at who the driver was — perhaps a member of the elite, someone with power, with juice. There was no license-plate lottery in those days. Only the connected were able to get the low numbers.

When they were growing up, plates were issued annually, a practice replaced by the registration stickers in use now. The brothers would ask people for their expired plates. Bob at one point had enough plates to cover the inside walls of his barn. His collection includes a coveted “1’’ from 1911.

Before privacy laws, newspapers would print lists of the low-number plates, with the names and addresses of the owners. The Globe at one point published a list of the top 100, and the boys would memorize the list. Even now, Bob figures that he and his brother can identify at least 300 people off the top of their head, based on their plate number.

That’s not all: He collects antique porcelain enamel signs, which are everywhere on the walls of his house and in the barn: “Automobilists look out for children,’’ says one. “Spitting forbidden within this station,’’ says another.

The three-level barn is so packed with cars and memorabilia it is difficult to move around. Toy cars, books, signs, and everything else is stacked precariously or placed in dusty viewing cases that themselves are valuable antiques.

These days, Bob English said, he has decided to slowly sell off what he has spent half a century collecting. It’s become a bit of a burden, he conceded. There’s the insurance and alarm systems, for example.

He used to give school children tours of the barn.

In the high-peaked roof of the barn, he pointed to a broad shelf stacked with cans.

But every piece he’s collected — and he figures there are at least 3,000 — has its own story.

He pointed to another item, a 10-foot-long Goodyear sign that’s more than a foot wide. He said it was bought in Maine and was too long to fit in their tiny car, so he and his wife strapped it on the roof; the sign ran from the front bumper, across the windshield, and over the top.

How did he see out the front window?

He said his wife wasn’t happy about it, but they made it home in one piece.

Matt Carroll can be reached at mcarroll@ globe.com or followed on Twitter @GlobeMattC.