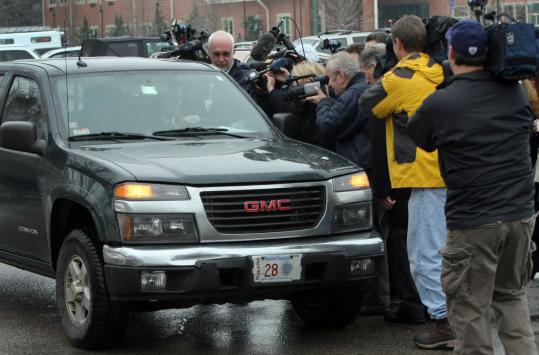 Scott Brown’s pick-up truck was surrounded by the media in Wrentham on Tuesday. ‘I love this old truck. It’s brought me closer to the people of this state,’’ Brown said in an advertisement. (David L. Ryan/Globe Staff)
By Megan Woolhouse Globe Staff / January 22, 2010

Sorry, Prius, you’ve been eclipsed by The Truck.

That would be the green 2005 GMC Canyon driven by US Senator-elect Scott Brown; the regular-guy-mobile he plans to motor to Washington in a blaze of glory.

The Truck, which was prominently featured in Brown’s campaign, appears to have struck a chord so deep in Massachusetts that some truck dealerships are experiencing a surge of customer interest.

“We’ve gotten eight to 12 phone calls from people asking, ‘Do you sell trucks like that?’ ’’ said Al Cerrone, owner of an Attleboro GMC dealership that sells new and used trucks. “It prompted inquiries, and when you’ve got inquiries, you’ve always got sales.’’

Even a slight uptick in truck sales would constitute good news at many Massachusetts General Motors Corp. dealerships. Nearly half of the state’s 98 GM dealerships were scheduled to close last year after the automaker filed for bankruptcy in June.

And when the company eliminated its Pontiac and Saturn lines, some dealerships planned to fill the void with used cars and trucks. The Cash For Clunkers federal rebates helped for a while, but business remains slow.

Ray Ciccolo, Massachusetts director for the National Auto Dealers Association, said he’s seen a “major surge’’ in interest in trucks as a result of the attention given to Brown’s.

“I think what he’s trying to say is, ‘I’m not conventional, I don’t drive the conventional Honda Accord or [Toyota] Prius,’ ’’ Ciccolo said. “It speaks to his lifestyle. He’s a sporty-type guy.’’

And there may be a bigger trend emerging. According to the Registry of Motor Vehicles, the number of registered light truck drivers has risen from 1.6 million in 2004 to 1.9 million as of Jan. 11.

Sales staff at Bezema Buick GMC Truck Corp. in Norwood, where Brown bought his pick-up in 2005, believe he could be a one-man stimulus package. The dealership is preparing to offer a Scott Brown look-alike truck with 70,000 miles on it. They plan to put it on prominent display at the dealership, which is decorated with Scott Brown victory banners.

“If you look at the commercials, you can see our name on the back of his truck,’’ general manager Tom O’Neil said proudly. “We started the truck fad.’’

It may be premature to call it a fad, but during the campaign Brown and his advisers certainly capitalized on the candidate’s relationship with his vehicle in advertisements, appearances, and speeches.

“I love this old truck. It’s brought me closer to the people of this state,’’ he waxed in one advertisement that included a close-up image of his digital odometer at 199,467 miles. Brown fired back when President Obama suggested during a campaign rally for Martha Coakley that voters should “look under the hood’’ of Brown’s campaign, viewing it as an attack on his truck and his way of life.

“When he criticized my truck, that’s where I draw the line,’’ Brown said.

And after his upset victory Tuesday, Brown had this to say:

“It all started with me, my truck, and a few dedicated volunteers.’’

Soon Brown will hit the road again in his truck, this time driving it to his new workplace in Washington, D.C., to show the nation that Massachusetts might not be as blue a state as many thought.

The trip, however, will not be exactly green. The GMC gets 16 miles per gallon in the city and 22 on the highway.