A reflection of America's past

Airstream more than an RV - it's a design classic 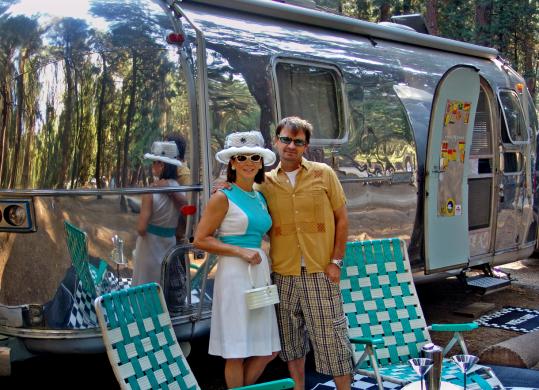 YOSEMITE NATIONAL PARK, Calif. -Maybe it's because I'm punchy. It's been a trying day, 10 hours on the road. The babies got carsick in the mountains, and one threw up spectacularly. After arriving at Upper Pines campsite, I had to back the 26-foot Airstream trailer into a tight space between trees, in the dark, a nerve-racking man audition with a gathering audience of seasoned and skeptical RVers shouting advice: "Cut the wheels to the left. . . . The other left!"

But now the day is done. Roz and Viv (my 10-month-old twins) are finally asleep in the trailer and my wife, Tina, with them. I'm sitting at a picnic table in the sumptuous, high-corniced night of Yosemite Valley, drinking coffee, looking at the Airstream. Just looking.

The orange lick and leap of the campfire light pours off the polished aluminum skin like lava. The Airstream hovers; it glows. Why, Miss Watson, I never noticed before, but with your glasses off, you're beautiful!

I've never been much interested in the recreational vehicle lifestyle. You call this camping? Please. But I've always wanted an Airstream. Billed as the world's oldest RV company - born in Los Angeles in 1932 but now in Jackson Center, Ohio - Airstream has had the rare good sense to keep its classic design classic. The riveted aluminum capsules of today are, aesthetically at least, not much different from the silvery streamliners of more than half a century ago.

An Airstream is a shiny telegraph from midcentury America, an object that reflects our grandparents' restless, road-hungry energy. One Airstream made it all the way to the permanent collection of the Museum of Modern Art in New York. So when the company asked whether I'd like to borrow a trailer for a week, it felt like being asked whether I wanted to borrow the 20th Century Limited or the Chrysler Building. Oh, yeah.

The fire's dying out now. Man, that sure is a pretty trailer.

The road ahead is rocky for America's RV industry. Shipments are off by 17 percent for the first half of 2008 compared with the same period last year, and sales of the big class-A motor coaches are off more than 50 percent. It doesn't help that gas and diesel are so expensive and that a big motor coach gets around 6 miles per gallon.

There are other factors too: As it has with the housing market, the tightening of credit is suffocating sales. Also, the decline in home values has shut off the flow of equity-rich RV buyers.

Airstream has been partly insulated from these forces. For one thing, the products are designer-label expensive - two to three times more costly per-foot than comparable trailers - so they play to a more affluent demographic. For another, the Airstream's retro-Modernist style attracts buyers who would not otherwise consider an RV.

"People will buy an Airstream because it's different, and they think they are different," says Rich Luhr, editor of the enthusiast magazine Airstream Life. "They tend to be more artistic, a lot of teachers, a lot of small-business owners and entrepreneurs. They're more design oriented. They look at a white-box RV and say, 'Ugh, I can't be seen in that.' "

In the last decade, Airstream has focused on high-swank interiors and cobranding ventures with such companies as Design Within Reach and Quicksilver. The 26-footer we're borrowing is a "Christopher C. Deam" edition. Deam, a San Francisco architect, loved Airstreams but hated their "grandmother's kitchen" interiors. He took it upon himself to redesign the interior in a cool Scandinavian style. The company liked it so much, it hired him.

"All of these products have lowered our average age of buyer dramatically," company chief executive Bob Wheeler said.

If you ever go shopping for a recreational vehicle, you will hear the argument that -compared with the cost of airline tickets and hotels - RVs are a much cheaper way to vacation. I've done a quick run of the numbers, and I think that's crazy.

The economics of RVing depend on lots of things: number of days of use, the monthly payments (the interest may be deductible as a second home), residual value, per-mile costs of operation, and number of people in your family.

Whatever the ratios, they all look worse when you're talking about an Airstream. The 26-foot rig the company is lending us costs $70,000; a white-box travel trailer would go for half that.

But it's a stunner. When we pull into California RV, the Airstream is sitting in the sun, shining like a Lockheed P-38, a glittering lozenge attached to Expedition King Ranch edition (also not cheap, at $43,590).

The technician walks me through the trailer, explaining the technical mysteries.

Finally, we're let loose. I pull onto Interstate 10, careful to swing wide to avoid curbing the trailer wheels. The Ford's V8 labors against the nearly 3 tons, but soon we're sailing along at an easy 65 miles per hour. The Airstream tracks as smoothly as a phonograph needle.

I admit it: I am relieved when I switch off the key of the Expedition, having negotiated the twisting road through the park and performed the minor miracle of parking in the dark. Not that the trailer was unmanageable. Most of the time, it didn't even feel as though it were back there. It's just that the potential for catastrophe is so much greater when you're in command of a 6-ton combo measuring nearly 50 feet.

Our first morning in the trailer requires some consideration of resources. Like all RVs, the Airstream can be externally supplied with water and electricity. But Yosemite doesn't have utility-equipped campsites, so we're having to steward the 39 gallons of fresh water on board carefully. (A status panel tells you how much water you have left.)

The RV lifestyle is also, except for the 100-grand rig involved, very Zen. "You have to learn to edit your life down to the bare essentials," said Airstream Life editor Rich Luhr, who has been "full-timing" in his Airstream for three years now. "You just have to get rid of anything that is nonessential."

This is acutely true in an Airstream. Because of the interior curvature imposed on them by the aerodynamic shape, the trailers are not particularly space efficient. Clearly, we have a lot to learn. After only 12 hours, the inside of our Airstream looks as if somebody threw a stick of dynamite into a Goodwill box.

Winnebago has its partisans and Monaco has its fans, but Airstream has a uniquely rapt culture and society numbering in the tens of thousands. One reason is that, because of their aluminum monocoque construction, Airstreams can survive for decades.

The company estimates that more than 65 percent of all trailers made since 1936 are still in use, if not actually on the road. Enthusiasts stage ambitious caravans. (Founder Byam himself thought nothing of setting off from Capetown to Cairo on an African caravan.) They keep track of one another by way of large numbers painted on the trailers so that, whenever they see another Airstream on the road, they can look it up in the official registry.

They overnight in one another's driveways, a custom known as "courtesy parking." They band together in segregated "Airstream-only" RV parks. (Is that even legal?)

"Airstreamers don't consider themselves RVers," says Randy Bowman, an owner from San Diego who rolls up to us on his mountain bike. "They're a breed apart. It's a clique."

After three days of camping, and some delicate proceedings at the park's "dump station" involving "black water," we head home. But before we do, we stop off for another $100 of gas.

How long can the Great American Road Trip survive? Obviously, there will always be people who can afford $300,000 motor coaches and $10-per-gallon fuel, when it inevitably reaches that point. But the average household income for RV buyers is only $68,000, according to the industry's own surveys. It seems certain that soaring fuel prices will eventually put this time-honored, middle-class pleasure out of reach of many.

And, indirectly, the cost of fuel threatens even the storied Airstream. When gas was cheap, big SUVs were hugely popular as first and second vehicles. A large segment of Americans had what Airstream's Wheeler calls "accidental towing capacity." Which is to say people didn't have to buy a dedicated tow vehicle to go with their trailer.

But truck and SUV sales are plunging. And with dramatically tougher government requirements for fuel economy coming, automakers are getting out of the large truck and SUV business. It's an open question of what people will use to tow travel-trailers in 20 years.

Airstreams, icons of the 20th century's open road, may find themselves marooned in driveways and parking lots in the 21st. By the time our daughters are grown, an Airstream may be as rare a sight on the road as a '57 Chevy or an Indian motorcycle is today.

But whenever they do see one, they're sure to stop and look. Just look.