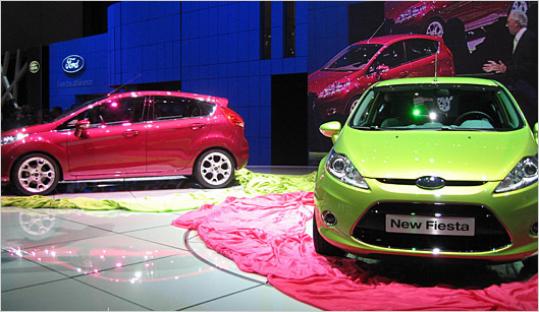 The new Ford Fiesta, seen here at the Geneva Auto Show in March and due for the United States in 2010, is the first of many upcoming European models that Ford is planning for global markets. (Clifford Atiyeh/Boston.com)
By Bloomberg News / August 14, 2008
Text size – +

TRAVERSE CITY, Mich. - , the second-largest US automaker, aims to win new customers in its home market with the introduction of a line of small cars from Europe, North American chief Mark Fields said.

"While none of us would have planned for the sharp downturn in the industry or the dramatically accelerated segment shifts, we are seizing the opportunity," Fields said yesterday at an industry conference here.

It is hoped that the 2010 introduction of a Europe-designed Focus and other models based on a new small-car platform will boost profit from that program by at least 10 percent compared with the current North American version, Ford said.

Ford's emphasis on small cars is part of chief executive Alan Mulally's effort to stem annual declines in US market share dating to 1995. Gasoline near $4 a gallon is crimping demand for Ford's light trucks, contributing to $23.9 billion in losses over the past 10 quarters.

US market share for Dearborn, Mich.-based Ford tumbled to 15.4 percent through July from about 25 percent in 1995, when the automaker was generating the bulk of its profits from pickups, sport-utility vehicles, and vans. Those models still accounted for 63 percent of Ford's US sales in the first half, which fell 14 percent. The industrywide decline was 11 percent.

The company also aims to cut costs by selling models worldwide. Ford begins production of a new version of the subcompact Fiesta in Europe and Asia this year and in North America in 2010.

The current US Focus only shares 20 percent of its parts in common with the European version. That will rise to 90 percent, Fields said.