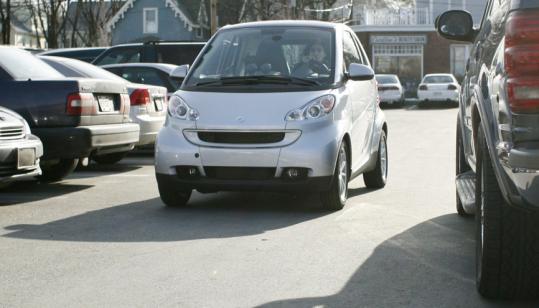 Crash-test results released today may answer consumers' questions about how safe they would be riding in the two-seat Smart fortwo. (ZARA TZANEV FOR THE BOSTON GLOBE/File January)
Email|Print|Single Page| Text size – + By Associated Press / May 14, 2008

WASHINGTON - Unlike most cars on the road, the pint-size 2008 Smart fortwo evokes a simple question at first glance: "How safe is it?"

The micro car, the smallest car for sale in the US market, offers a good level of safety, according to new crash tests conducted by the insurance industry.

The 8-foot, 8-inch vehicle received the highest rating of good in front-end and side-impact testing by the Insurance Institute for Highway Safety, helping address some concerns that consumers may be more vulnerable in the tiny two-seater.

The tests, released today, show how well vehicles stack up against others of similar size. The institute noted the front-end test scores can't be compared across weight classes, meaning a small car that earns a good rating isn't safer than a big car that scored lower.

Adrian Lund, the institute's president, said a small car may be more practical in urban areas where high-speed crashes are less likely. "All things being equal in safety, bigger and heavier is always better. But among the smallest cars, the engineers of the Smart did their homework and designed a high level of safety into a very small package," Lund said.

The institute's frontal crash test simulates a 40 mile per hour crash with a similar vehicle. The side crash simulates what would happen if the vehicle was struck in the side by a sport utility vehicle at 31 miles per hour. In a test that assessed rear crashes, the fortwo received the second-highest rating of acceptable.

Smart, a division of Daimler AG's Mercedes-Benz brand, has arrived in US showrooms this year as consumers deal with rising fuel prices. The automaker has received more than 30,000 reservations for the vehicle - which has a base price of more than $12,000. The vehicle gets 33 miles per gallon in the city and 41 miles per gallon on the highway.

In earlier crash tests conducted by the government, Smart received the top score of five stars in side testing but the driver door unlatched during the test and opened. While it did not affect the vehicle's test score, government regulators said the incident required them to note a safety concern for the vehicle.