Those who visit retail sites with the devices spend more time, money 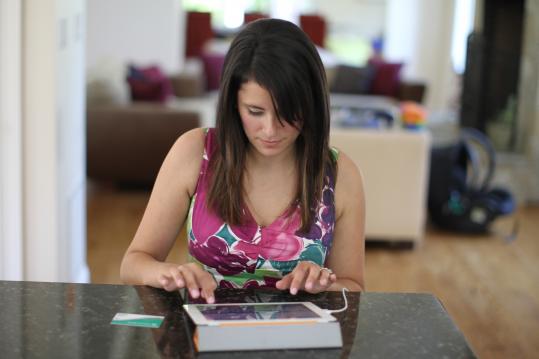 Kelly Tharp ditched the mall long ago, and more recently she bailed on using her laptop to shop online.

Like many consumers, Tharp is sold on using her iPad for online catalog browsing and buying. She is spending more time — and money — curled up with the touchscreen device than she ever did with bulkier laptop and desktop computers, or a smartphone.

“The iPad makes it so easy and painless to shop,” said Tharp, who lives in Cohasset.

Online shopping has had explosive growth for years, but merchants have struggled to make it replicate the in-store retail experience. Now, the ease and flexibility of popular hands-on tablets like Apple Inc.’s iPad and Samsung’s Galaxy Tab narrow that gap, ushering in a new era of online impulse buying.

Consumers are likely to spend more time shopping from a tablet than from other types of devices for several reasons, said Sucharita Mulpuru of Forrester Research in Cambridge. Users are generally more affluent and knowledgable about the latest technology, she said, and product images look more vibrant on tablets. But most important, people tend to use their tablets during idle hours, such as when they are watching television or relaxing in bed.

“This not only increases the overall amount of time online, but the state of mind is more leisurely, when people are more inclined to browse, add more things to their shopping cart, wait for pages to download, discover items,” Mulpuru said.

With more than 60 million Americans forecast to own a tablet computer by the end of this year, retailers say the devices are driving an increasingly larger share of online revenue. According to the 2012 Shop.org/Forrester Research Inc. State of Retailing Online survey, 49 percent of merchants reported their average order value from tablets now exceeds Web sales from laptop and desktop computers and smartphones. Mobile phones — once viewed as the best growth vehicle for online shopping — have proved a dud with many consumers because of their small screens and keypads.

Diane DeScenza Herth’s allegiance to her iPad is typical of online shoppers. DeScenza Herth takes it everywhere, and when she’s at home the device is usually by her side, if not in her hands. She likes the fact that it’s lighter than a laptop, and easier to view compared with a smartphone.

“The tablet has definitely changed the way people shop,” DeScenza Herth wrote in an e-mail — from her iPad. “I love having mine to have research and shopping just a finger tap away.”

Zmags, a Boston technology company, has helped Kenneth Cole, Express, Neiman Marcus, and other retailers improve the tablet shopping experience with a platform that makes it simple to add music and voices to a site; a quick-scan feature that lets shoppers rapidly cruise through pages; and a moveable “action bar” that follows people as they browse so they can buy something or share information about a good deal through social media from whatever page they’re on.

“We’re trying to drive impulse purchases with immersion and enjoyment,” said Sean Ford of Zmags. “There are tools we can use to create the same sense of inspiration on tablets that retailers use in their brick-and-mortar stores.”

Retailer Kenneth Cole has launched more than 10 tablet catalogs since last fall with increasingly sophisticated technology that allows consumers to buy an entire outfit showcased on a page.It’s more dynamic than the grid displays that most retail websites feature.

“Their carts are bigger and they are buying more of the whole look,” Choyne said of customers who favor tablets.

Brahmin, a handbag company based in Fairhaven, said people shopping on iPads spend the most time on the company’s site.

They also have the highest number of page visits, and the lowest abandon rate — meaning they don’t often leave without buying something, according to Amy Sullivan of Brahmin. The tablet site is designed to show consumers matching accessories and other colors from a particular collection without forcing them to visit multiple pages.

“It’s a complete change of mindset,” Sullivan said. “Impulse shopping is so important to us. When we mail out catalogs, people may flip through it, or it may end up on the coffee table. But with our online customers, they are looking to buy now.”