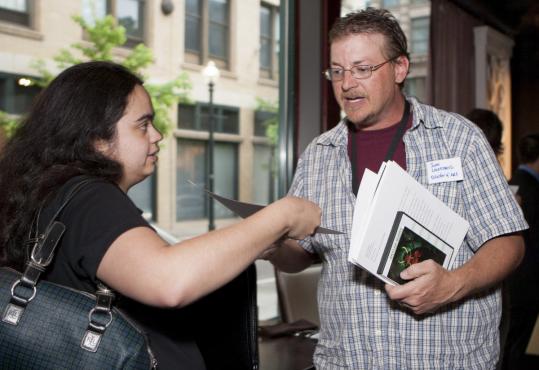 Animator Michelle Bartlett, 24, of Norton handed her resume to John Lindemuth, director of art for Turbine Inc., at a job fair for video game developers in Providence last week. (Victoria Arocho)
By Michael B. Farrell Globe Staff / May 28, 2012
Text size – +

Nicholas Kole just lost his job. Luckily, he is in the video game industry.

Dozens of game companies are lining up to hire castoffs like Kole from 38 Studios LLC, Curt Schilling’s failing video game maker. “They are pulling us out of the fire,’’ Kole said, “and we really appreciate what they are doing.’’

Even as 38 Studios laid off its entire staff of nearly 400 people last week, rival video game makers were holding job fairs just blocks from the company’s offices in Providence. Other game companies reached out to 38 Studios staffers on social networks like Twitter and Facebook, inviting them to apply for jobs. In fact, Kole, a 24-year-old character artist, said he already has some promising leads.

Unlike employees from other industries who have endured difficult layoffs and downsizing, 38 Studios staffers are expected to quickly land elsewhere in the highly competitive video game business.

“Generally, the demand for talent in the game industry outstrips the supply, especially when you get to a certain level of experience,’’ said Michael Cavaretta, an attorney who represents video game companies.

It helps that when he started 38 Studios, former Red Sox pitcher Schilling recruited some of the industry’s top talent from across the country and abroad, including the staff of Maryland game maker Big Huge Games, which 38 Studios acquired in 2009. Competitors have been racing to snatch up computer animators, developers, and engineers from 38 Studios.

“We are taking advantage of the situation,’’ said Adam Mersky, spokesman for Needham’s Turbine Inc., one of Massachusetts’ biggest game makers, which attracted 300 candidates - including many from Schilling’s company - to a job fair Tuesday held down the street from the 38 Studios offices. “You’ve got to be aggressive if you want to find good people.’’

Although Mersky would not say whether Turbine has hired any laid-off 38 Studios employees yet, the company is bringing some candidates from the job fair in for interviews. Turbine is growing fast; it employs 420 people, including 60 hired since the beginning of the year, and is looking to add about 50 more.

Soon after news broke on Thursday that 38 Studios was laying off all employees in Providence and Maryland, Twitter was full of job offers. The Cambridge office of social gaming giant Zynga Inc. posted that it was seeking “engineers, artists, animators, and anyone else who is super talented.’’ Even nongaming companies joined in, including Chegg Inc., a company that rents textbooks to college students and wants to hire more engineers.

Alex Rubens, a freelance video game journalist from Seattle, set up an online Google document to collect industry job openings after he saw numerous video game companies posting positions on Twitter. On Friday, the document listed 160 companies looking to fill more than 2,000 jobs. “That’s probably what means the most to me,’’ he said. “There is a really strong bond throughout the industry, so they want to help everyone out.’’

Since 2006, when it was established in Maynard as Green Monster Games, 38 Studios had grown to about 400 employees. Last year, Schilling moved its headquarters to Providence, after Rhode Island offered the company $75 million in loan guarantees. At the time, officials hoped the deal would jump-start a new video game sector and bring highly paid jobs to the state.

And 38 Studios did pay well: an average of $67,500 for jobs created in Rhode Island, a requirement of the deal with the state. But a number of 38 Studios employees were making well into six figures, said Marc Mencher, chief executive of GameRecruiter.com, a Florida staffing agency that has worked with 38 Studios.

“They were really picky, careful with who they hired,’’ said Mencher, who is now working to help some 38 Studios employees find new jobs. “I am not anticipating that these people are going to have much trouble at all.’’

From the beginning, Schilling was able to attract some big names to his company, despite its lack of a track record. (38 Studios has released only one game, called Kingdoms of Amalur: Reckoning.) He recruited Todd McFarlane, a famed comic book artist, and fantasy author R.A. Salvatore, a Leominster native, as consultants. And he hired video game developer Ken Rolston, a well-known industry veteran.

Earlier this year, John Blakely, previously general manager at Zynga’s Austin, Texas, offices and a Sony Online Entertainment executive, joined 38 Studios. But by last week, Blakely and chief executive Jen MacLean had changed their profiles on the professional networking website LinkedIn.com to indicate they had left the company. Neither Schilling, Blakely, nor MacLean responded to requests for comment.

Brett Close, a veteran of the industry giant Electronic Arts who served as chief executive of 38 Studios from 2007 to 2009, said Schilling’s company used industry contacts to find its first staffers.

“We built the core team with veteran talent,’’ Close said. “I knew most of them from my career network, and many of them had already worked together previously, at companies like Electronic Arts, Sony Online, or Blizzard. After we established the core foundation, we shifted to more local hiring to fill out the team.’’

Close is confident 38 Studios employees will find new work. “I think that great talent creates opportunities,’’ he said. “From what I hear, the recruiting frenzy has already begun. They won’t be jobless for long.’’

The Boston area, with one of the largest game development communities in the country, offers plenty of opportunities for former 38 Studios workers, said Terrence Masson, director of creative industries at Northeastern University. “There’s hardly a better place in the world for a young person to get a job, and keep a job, in games,’’ he said.

About 70 local companies are either in the video game industry or support it, Masson said. “It’s such a hyperactive networking city that if you’re good, and you get out there and network, you can go out there and get a job.’’

Michael B. Farrell can be reached at michael.farrell@globe.com. Hiawatha Bray of the Globe staff contributed to this report.